In this chapter of a series of personal narratives on psychology, people and destiny, Pallav Bonerjee holds forth on the virtues of moving house – across localities and cities

My earliest memories of changing our residence belong to a time when I was all of six years age and lived in Calcutta. My world comprised of my parents, a younger sister, grandparents and plenty of cousins. Life was perfect. My sister was in pre-school and I was in class one. We had made some friends in school. And then, all of a sudden, we got news that my father would have to transfer to a city called Raipur in Madhya Pradesh (now the capital of Chattisgarh). Being young and ambitious, my father had said “Yes!” My sister and I were told that since he was in a transferable job, we must get used to such changes. It would help us ‘in the long run’. At six, I had no idea what that long run could have meant. Though I have no distinct recollection, I’m sure I must have tried to dissuade my father from going ahead with this ‘opportunity’ citing reasons that ranged from “How would we manage without speaking Bengali or eating Bengali food?” to “What would happen to all our friends and cousins without us?”. It didn’t help.

Before long, we were saying good bye to my father with teary eyes. He was to go ahead first and set up house and look for a new school for us. We were to follow in the next couple of months. During that period, we wrote many letters to him and got some replies from him as well. It took us about five months to find ourselves in the new city of Raipur during the summer months of 1989. The heat was scorching. We had a nice little bungalow to ourselves and once our furniture arrived, my parents got busy setting the place up. That was perhaps the first time my sister and I had a formal introduction to planning and decoration of a household. Soon, the house became our home. We got admitted into a new school and started learning the basics of Hindi. Bengali study books were shelved, much to my mother’s dismay. We had all my cousins visiting us during their respective holidays in Calcutta. We wrote letters to our old friends and sent them birthday cards! My grandparents came over to help us settle down and assist my mother during my father’s long tours around Madhya Pradesh. Life was hard, but we were finding balance. And then came another jolt!

After spending a year in Raipur, my father was transferred back to Calcutta. Needless to say, we were overjoyed for a plethora of reasons. The sheer excitement of going back was overwhelming. And this was not just us kids, my parents were also relieved to be going ‘home’ again. Before long, we were saying goodbyes to our classmates and neighbours and packing our clothes and knick knacks in boxes. The home transformed into an empty house once again, just like the first day we had come in but in reverse order.

On reaching Calcutta, we were accepted back into our old school without much hassle. They were happy to have us back. That was a great relief for my parents since it was middle of the academic session. However, my mother insisted that we re-start Bengali as a second language subject instead of continuing with Hindi. “We are Bengalis, and this is Calcutta!” she asserted. Obediently, my sister and I started studying basic Bengali grammar once again. Thankfully, we were still young and adapted with time. A couple of years passed and we had settled into our lifestyle when my father came back from his office one day with another surprise announcement! This time we were to move to Ahmedabad in Gujarat. I was in class six and my sister was studying in the fourth standard. The only question that haunted us this time was, “Do we need to start Hindi again?” The answer was a simple and painful “Yes”!

My memories of Ahmedabad are quite vivid and joyous. I remember moving into our new apartment, which was part of a housing society. There were many children my age, all speaking a language I could not comprehend. Both my sister and I were admitted into a wonderful school and made many good friends soon. This time, I remember, we did not take much furniture along with us from Calcutta and chose to buy new ones which added to the excitement – the excitement of choosing cupboards, shelves, tables and curtains for the house. We spent a lot of time discussing where to put those things and how often we would change their orientation and location in order to combat visual boredom. This time also, my cousins and grandparents came to visit us during holidays and we made many road trips in and around Ahmedabad. My sister and I had to learn Hindi quickly to ensure that we were not left too far behind in vernacular classes. Bengali text books were again packed up and put away in the loft. We also took special classes in Gujarati, in order to help us get by on a day-to-day basis.

Two years passed by and we had become quite comfortable in our home at Ahmedabad. But Calcutta came calling yet again. Shifting back this time was bitter-sweet. We had too many fond memories of Ahmedabad. There were many people who had been added to our list of ‘family friends’ in two years and it was hard to say goodbye to them. At school, most of our teachers were also quite fond of us and they were sad to see us go. Most of our neighbours whom my parents would meet regularly got together and gave us a farewell party. My cousins at Calcutta were plain excited and happy to hear that we were coming back. This meant that we could all gang up once again and play cricket during holidays, watch movies together and celebrate festivals without missing anyone in the family.

On our return, there was a gala welcome at my grandparents’ home, where every possible uncle and aunt had congregated to hug us and pinch my sister’s chubby and my not-so- chubby-anymore cheeks to convey their love, excitement and affection. Bengali delicacies and sweets were laid out for us to savour and enjoy. And then suddenly, out of nowhere, when I was in the middle of gobbling up three rasgullas at one time, popped the million-dollar question, “Should the children restart Bengali as a second language again?” I could sense the terror in my sister’s eyes, though she was happily munching fish chops a minute ago. I realised then that the time had come for me to speak up. So I spoke. I’m not very sure if anybody paid much attention to what I had to say but somehow, better sense prevailed over my parents and they did not force us to shift back to studying Bengali again. I was in the seventh class then and my sister in the fifth. We stuck out like sore thumbs in our respective classes as the only Bengali children studying Hindi as a second language subject, kind of like ‘second-class citizens’. However, we survived without any discernable trauma.

Since then, we moved our residence within Calcutta quite a number of times for varied reasons. Each time we became more proficient in the process and my sister and I got more involved in it as we grew older. We ended up staying at a variety of localities in the city and meeting diverse people, but not all our relocations are fondly remembered. I specially recollect one such instance when we were to move to the New Alipore area. There was a robbery on the very first night that we stayed there. We woke up very late to find that the main door was broken, most of our valuables were stolen and some furniture damaged. Thankfully, none of us were hurt. The very same day we packed things again to move out of that house. By evening we were elsewhere, never to step foot in that building again. 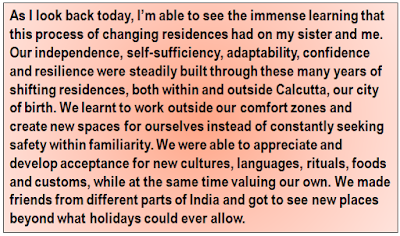 After college, I moved out of Calcutta to Delhi for higher education. I stayed in shared paying guest accommodations, hostels and finally in rented flats. My sister got married and shifted to Mumbai. My parents also moved within Calcutta once again after we were gone. We helped them set things up again, to dismantle and re-arrange, to clear out and set up afresh. Was it their last move? Who can tell?

As I look back today, I’m able to see the immense learning that this process of changing residences had on my sister and me. Our independence, self-sufficiency, adaptability, confidence and resilience were steadily built through these many years of shifting residences, both within and outside Calcutta, our city of birth. We learnt to work outside our comfort zones and create new spaces for ourselves instead of constantly seeking safety within familiarity. We were able to appreciate and develop acceptance for new cultures, languages, rituals, foods and customs, while at the same time valuing our own. We made friends from different parts of India and got to see new places beyond what holidays could ever allow. I believe today that it contributed in a significant way to my success as a mental health professional. The numerous changes of residence taught me the essential process of empathy and respect for diversity.

I shifted my residence from one crowded part of Delhi to another last year along with my wife and pet dog. My wife helped set it up beautifully. It took a toll on our health. Was it tedious and exhausting? You bet. Was it easy? Far from it. And yet, was it something I regret? The answer is a resounding “No!” I have learnt to see that moving around does help in an infinite number of ways ‘in the long run’!

Pallav Bonerjee is Consultant Clinical Psychologist at VIMHANS Hospital, New Delhi. Whenever stressed, he never fails to spend some time with his own therapist, who has a wet, black nose and goes by the name of Copper!
Posted by Varta at 15:10