Beginning this issue of Varta, we bring you Star Quest, a series of photo-stories of individuals who may not be public figures like politicians, artistes, social activists or media persons, but have in their own way contributed to social equality and empowerment around gender, sexuality and related issues.

Their contribution may be in an intimate arena – among friends and neighbours, their local community, a village or slum school, their own work place and so on. It may not have attracted any media attention, yet the importance of their efforts cannot be underscored enough. Varta is happy to bring to light such hidden ‘stars’ and focus on endeavours that generate hope for a better present and future. 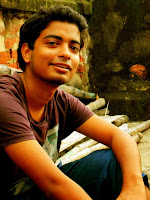 Star of the month: Surojit Mitra, 23, resident of Bow Bazar, Kolkata, is an unassuming youth development volunteer, currently associated with Prantakatha, Kolkata and pursuing distance education in the arts. His message to everyone is a simple one: “Don’t ignore anyone, whoever they are.” He is happy to have a diverse mix of friends from different backgrounds and walks of life, and that also includes his pet Goldie. 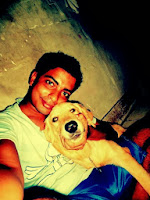 Surojit, or Bumba to his friends, is passionate about teaching children living in the Bow Bazar red light area. He started off with Sanlaap as a member of their ‘Youth Partnership Project’ supported by ECPAT International (End Child Prostitution, End Child Pornography and Trafficking of Children for Sexual Purposes). From 2008 to 2010, he was trained by Sanlaap to conduct teaching and activity classes for small children, and this has continued till date even after the project ended. Never one to be demoralized, he now conducts classes from his own home, and also encourages older children to continue their education. 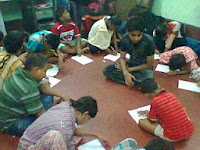 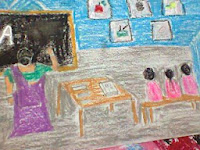 Photos show Surojit conducting classes during his association with Sanlaap and drawings made by his students (photos provided by Surojit Mitra). 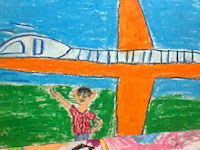 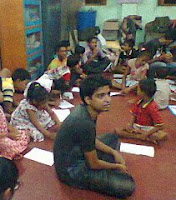 Recalling the initial struggle he had to undergo to convince his parents about his plans to teach children living in red light areas, he wishes that the ‘Youth Partnership Project’ had not ended. In his experience, these children need a lot of patience and long-term support to continue with their education. Many of the children have their mothers engaged in prostitution. It is difficult to win their trust in the face of other pulls like drug use and the challenges posed by their circumstances. Sometimes they take offence easily and one can expect a gradual change at best. Kudos therefore to Surojit for continuing with the teaching efforts on his own steam.

Busy also these days as a volunteer with his ‘Prantakatha family’, Surojit is part of the ‘Must Bol’ filmmaking-based youth campaign against gender based violence (see Happenings report ‘Must Bol’ Campaign Reaches Milestone in this issue of Varta).


Surojit is quite relaxed about his future plans. But his eyes brighten up when he says that the children he has taught remember him even after having grown up. That gives him a quiet satisfaction that he has been on the right track, and he is certain that he wants to become a professional social worker.

All strength to him says Varta.