A rainbow in Hindi

The last week of November 2013 brought an extraordinary e-mail to Sukhdeep Singh, Bangalore-based Editor of Gaylaxy, one of India’s leading online queer magazines (www.gaylaxymag.com). In the heady months ripe with anticipation about the Supreme Court verdict on Section 377 of the Indian Penal Code, a reader wrote in about the lack of queer reading material in Hindi and how the Hindi media often leant towards a negative portrayal of the queer community. Knowing, unfortunately, that there was no Hindi space, the reader requested the e-mail to be translated into English and printed in Gaylaxy. Sukhdeep Singh decided not to translate it, and instead published the piece in Hindi itself. This episode germinated the seed of a Hindi queer magazine.


Miles away, in Mumbai, Sachin Jain, Editor, Gaylaxy Hindi was toying with the same idea. One of the co-founders of Gay Bombay, Sachin Jain was also a published author and worked as a translator and interpreter. As regular contributors to Gaylaxy, Sukhdeep Singh and Sachin Jain tried their hand at a Hindi magazine in 2013 but nothing came of it. Everything changed, however, on December 11, 2013. “The Supreme Court decision shutting the door on queer rights galvanized both of us to do something positive and affirmative,” says Sachin Jain. “From the ashes of recriminalization, Gaylaxy Hindi emerged.”

From its inception, the effort was a success. The first issue of Gaylaxy Hindi (January 2014) was launched in 20 days flat and the current issue (February 2014) has a wealth of editorial views, queer poetry, prose, current affairs, film reviews, all without an English hangover. “I was clear that the Hindi magazine was to have an independent existence and not become a collection of English translations,” says Sukhdeep Singh.

The first issue carried pieces by Akhil Katyal and Sachin Jain himself, besides a review of a queer Marathi play and an interview of an IIT student who had made a video in Hindi on recriminalizing homosexuality. By the time the second issue came about, the magazine had begin to flourish with contributions from Ruth Vanita, Shaleen Rakesh, Akhil Katyal and Bindumadhav Khire, reflections on queer-feminist struggles of Labia and Zahan in Mumbai and an appeal to donate to the first Guwahati rainbow pride walk planned on February 9, 2014.

Gaylaxy Hindi is filling up an oft-neglected void in the Indian queer space. “The discourse is often overshadowed by anglophone voices, and given the complex social connotations and place of English, there is a need for genuine, authentic, regional voices to generate a vibrant discourse,” says Sachin Jain. 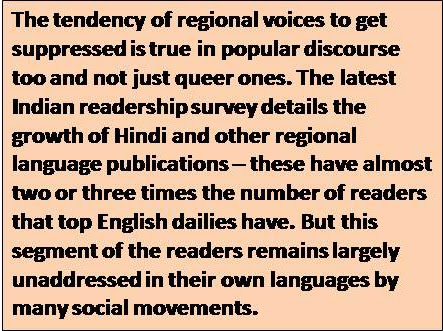 The tendency of regional voices to get suppressed is true in popular discourse too and not just queer ones. The latest Indian readership survey details the growth of Hindi and other regional language publications – these have almost two or three times the number of readers that top English dailies have. But this segment of the readers remains largely unaddressed in their own languages by many social movements. “With Gaylaxy Hindi, the mission was to inform, inspire and enable Hindi speaking queer people to understand and celebrate sexuality diversity and work towards achieving social equality,” Sachin Jain claims.

There is another potential benefit. “The presence of a discourse-provoking Hindi magazine will refute the claim that sexual minorities are an import from the West and not indigenous to India,” explains Sachin Jain.

Gaylaxy Hindi’s strength lies in the fact that it is online and free, thereby bypassing the chronic problem of circulation. Though Internet penetration remains a problem, potential access to the magazine is far wider than a print publication.

This is not to say that the endeavour is without challenges. “Getting original Hindi content and writers remains a problem. Infrastructural issues with fonts plague the creators, as do problems with access and awareness,” says Sachin Jain.

Sukhdeep Singh points out another problem: “One of the biggest challenges is reaching out to our target audience since most online queer groups are dominated by English-speaking people”. And yet, he says Gaylaxy Hindi seems to be making headway: “I have received messages from Ajmer, Ranchi, Agartala, Jaipur and other towns congratulating us. One person said it was high time for a Hindi queer magazine which they felt was their own.”

A lot of appreciation has also poured in about the content. A mix of celebrated voices like Ruth Vanita with new blood like Jay Yadav, Ankit Bhuptani and Aditya Shankar has been received well.

As Gaylaxy Hindi works furiously towards a third issue, the editors are hopeful of keeping up the promise. “Creating a flourishing platform for self-expression and awareness and building bridges with allied movements will guide our work,” says Sachin Jain.

Dhrubo Jyoti studied physics only to go into journalism. He now works with The Hindustan Times and freelances with Gaylaxy.
Posted by Varta at 00:20

Email ThisBlogThis!Share to TwitterShare to FacebookShare to Pinterest
Labels: Happenings