It would be tempting to dismiss the occasion as yet another consultation on lesbian, gay, bisexual and transgender (LGBT) concerns, an activity that the Indian queer movement has become rather good at. But this meeting in Hotel Keshari in Bhubaneswar on May 30, 2014 proved to be no run-of-the-mill gathering. Organized by SAKHA, Odisha’s foremost queer support group, and partner agency Solidarity and Action Against the HIV Infection in India (SAATHII), the usual suspects were all there – queer community leaders, NGO workers, lawyers, doctors, psychologists and media persons. Yet the passion with which they discussed and debated key socio-legal concerns facing India’s queer communities was refreshing.


The illogical aspects of Section 377, Indian Penal Code in criminalizing queer people; its incompatibility with constitutional morality; its contradictions with the amended rape law Section 375 (see Curious about Curative Petitions in the April 2014 issue of Varta) – the 40-strong audience in the consultation discussed everything with interest and remarkable awareness.

The main theme of the consultation – implications of the Supreme Court’s April 2014 verdict on transgender identities and rights in response to a petition filed by the National Legal Services Authority (NALSA) – drew heated debates and revealed ambitious plans of the Hijra and other trans women's communities in Odisha. Key presenter Tripti Tandon from Lawyers Collective – HIV/AIDS Unit, New Delhi, had her hands full explaining the nuances of the Supreme Court’s NALSA verdict as well as its December 2013 verdict where it had controversially given a fresh lease of life to Section 377.

That all the Section 377-bashing took place in the backdrop of the reinstatement of the law by the Supreme Court did not matter – it was in keeping with nationwide trends of civil society criticism and protests against the court’s decision. That it took place soon after the 16th Lok Sabha polls had brought the Bharatiya Janata Party (BJP) to power at the Centre made it much more interesting. Till date this political party remains ambivalent on its stand vis-à-vis criminalization of homosexuality and queer people in India. And yet the chief guest at the consultation was Bijaylakshmi Mahapatra, Vice President of the BJP’s Women’s Wing in Bhubaneswar! A strong well-wisher of trans women's communities in Odisha, she supported the candidature of a trans woman for the Bhubaneswar Municipal Corporation polls in March 2014 when the ruling Biju Janata Dal opposed it and the Election Commission rejected it.

Well, the way the political cookie crumbles has always been unpredictable (and delicious?), but many participants at the consultation did not play around with their stand on gender and sexuality diversity. Sample this quote from physician Dr. S. N. Mohanty: “Religious bodies and figures are hypocrites – all kinds of sexual relations are prevalent within their institutions, but outwardly they say things to maintain their holiness!” TV cameras from Doordarshan, ETV and OTV readily captured these statements, in keeping with the rather queer supportive stance taken by the media in Odisha in the last half a decade or so.

These don’t seem to be isolated events in the land of the Konark Sun Temple, well known for its beautiful and erotic sculptures that display a mind boggling sexual diversity and openness. A day before in Bhadrak, an important trading town in Odisha named after Goddess Bhadrakali, a workshop on adolescent health and development needs provided a similar insight. Organized by Santi Seva, primarily a trans women’s support group, and SAATHII, the workshop looked at the concerns of queer people below 18 years of age, particularly trans women and males who have sex with males. None of the government officials and health workers present had any moral dilemmas on talking about sex among adolescents, even if it were same-sex sexual relations. Not one question on ‘why homosexuality’ or ‘why transgender’ was a record of sorts in the long experience of this author in participating in workshops on gender and sexuality!

A degree of shift in attitudes towards non-normative genders and sexualities was evident even earlier. At a panel discussion and debate on the Supreme Court’s verdict on Section 377 organized by students of National Institute of Science Education and Research in Bhubaneswar on February 1, 2014, even the speakers in favour of the Supreme Court’s verdict avoided the ‘natural’ versus ‘unnatural’ route of argument. At least one senior advocate among them, Pradeep Kumar Nanda, while arguing that the Supreme Court was technically correct in passing on the matter of Section 377 to the Parliament for appropriate legislation, stressed that he was not in favour of criminalization of queer people. “The legislature should surely frame a new law to protect LGBT rights, and the judiciary should uphold it, but the judiciary cannot frame the law,” he argued even as speakers against the Supreme Court verdict vehemently opposed him.

Equally interestingly, Kaish Q. Khan, Assistant Professor, Kalinga Institute of Industrial Technology, Bhubaneswar, well-learned in Muslim scriptures, had this to say: “The door is closed in Islam – there is no middle ground for same-sex sexual relations. But something may be thought of to protect LGBT people’s rights against discrimination and violence”.

Then again, it was an important development in the state when Meera Kinner, Treasurer, SAKHA applied for the Rajya Sabha polls as an independent candidate in April this year. That she didn’t succeed was a different matter, but it went a long way in strengthening positive visibility of trans women's communities in Odisha.

This visibility is also reflected in the increased bargaining power of the queer communities in Odisha with the state government. According to Sadhana Kinner, President, SAKHA, in 2013, a charter of demands was submitted to the Department of Women and Child Development, Odisha, which included a proposal to set up a transgender welfare board in the state (a similar body already exists in Tamil Nadu). The charter of demands also asked for separate educational facilities for trans women. While a concrete response is awaited, SAKHA has successfully advocated with premier health institution Capital Hospital in Bhubaneswar to allocate at least four separate beds for trans women patients in a month. 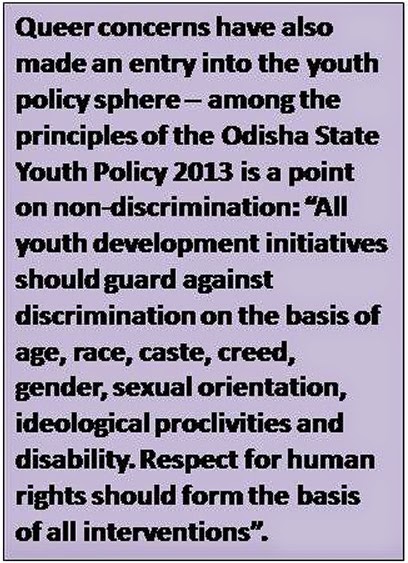 Queer concerns have also made an entry into the youth policy sphere – among the principles of the Odisha State Youth Policy 2013 is a point on non-discrimination: “All youth development initiatives should guard against discrimination on the basis of age, race, caste, creed, gender, sexual orientation, ideological proclivities and disability. Respect for human rights should form the basis of all interventions”.

The chapter on ‘Special Focus Groups’ is even more explicit: “Youth that suffer from moral or social stigma: The policy recognizes the special needs of marginal groups such as lesbians, gays and transgender and take steps to integrate them into the mainstream . . .” The policy does not specify what the ‘special’ needs are and how these will be met, but Sadhana Kinner is hopeful that the Supreme Court’s NALSA verdict will help show the way and also speed up implementation of the state government’s promises.

One such promise is to remove hurdles in the execution of two social welfare schemes – the Madhu Babu Pension Yojana (MBPY) and low cost housing scheme Mo Kudia (My Hut) Yojana. The MBPY is a monthly pension scheme launched by the state government in 2008 for people living with HIV, which has failed to reach most trans women living with HIV in Odisha. Queer activists in Odisha feel that the double stigma of HIV and transgender identity at the social level and within the health and administrative systems is responsible. Similarly, the Mo Kudia Yojana (started 2008-09), which requires ownership of land towards eligibility, needs to be modified as it has not benefitted trans women, particularly Hijras, because they rarely possess land. In fact, many are denied property rights by their families.

There are concerns also with the Supreme Court’s NALSA verdict itself. Most trans women participants in the Bhubaneswar consultation were worried that unscrupulous men would cross-dress and pretend to be transgender or Hijra in order to exploit the socio-economic and reservation benefits recommended by the Supreme Court for transgender people. A hard-fought gain for trans women would thus go waste. They wanted objective criteria and processes for determination of a person’s (trans)gender identity, and some insisted that only individuals who adopted a transgender way of life and had undergone sex change should have access to the reservation benefits.

However, there was no consensus on what would happen to trans women who did not want or could not afford sex change, or who did not prioritize outward expression of being transgender through personal appearance or other lifestyle aspects out of choice or social compulsion. Even a thoughtful suggestion by a participant that the objective criteria should apply only in the context of reservation benefits and not for general free expression of one’s transgender identity did not find many takers.

Perhaps what the queer movement in Odisha needs to guard against is rigidity in its own thinking and functioning. Clear analysis of the benefits and limitations of reservations as an approach towards socio-economic uplift may better inform the movement’s policy advocacy strategies. Similarly, long term expected benefits of creating islands of acceptance (as in exclusive educational facilities for trans women) should also be weighed against the benefits that may come from ensuring larger social inclusion (by gender sensitizing and disciplining existing educational facilities). The option of a combined approach need not be ruled out either.

Amid all these happenings in Odisha, one is sorely going to miss the gentle but alert presence of Dambarudhar Sunani (1985-2014). One of the first trans women activists in the state, to her goes the credit of mobilizing queer people to form support group Bhawanis in Kalahandi district in 2005. She passed away on May 22, 2014, leaving behind an emerging movement that would surely have benefited from her insight. But in her end related to a chronic disease and depression also lies a lesson for all in taking better care of people around them, not just through medicines but also the intimate human touch.