From inclusion to exclusion?

Filmmaker Madhusree Dutta informs us that “in 1914, the word ‘documentary’ was used for the first time in the prospectus of the Continental Film Company in USA for In the Land of Head Hunters, a film on American Indians by ethnographer Edward S. Curtis” (In Defence of Political Documentary, Infochangeindia webzine). She goes on to tell us that in India this genre of films flourished in the 1950s, when Pandit Jawaharlal Nehru established the Films Division of India primarily to produce films as a mechanism to reach out to a vast majority of the people in the newly formed nation state, many of them illiterate, to inform them about the vastness, greatness and pluralistic cultures of the country.

Documentary films as a medium of expression directed towards building public opinion on specific issues, therefore, is certainly not new in India. Stalwart film directors like Mani Kaul, Ritwik Ghatak and Satyajit Ray have made documentary films. In addition, there are people like Anand Patwardhan who have made only documentaries and raised a storm over a number of issues that question the policies and practices of the very nation state that Jawaharlal Nehru sought to glorify through the first generation documentary films of the country. India has a veritable list of political documentaries also, a genre that gathered momentum from the late 1970s, aimed at informing people about discrepancies and deviations in the democratic functioning of the Indian state and moving them into action – of resistance and protest.

One of the latest additions in the long list of documentaries in India is The Unheard Voice: The Trans-Shamanic Culture of Manipur, a film on an issue not many people are likely to be familiar with. Produced by the All Manipur Nupi Maanbi Association (AMaNA), this documentary focuses on the presence of male-to-female transgender persons in Manipur’s religio-cultural practices at a time when certain civil society organisations have chosen to bring in prohibitive measures that contrast sharply with the tradition of acceptance and inclusion. Directed by Siddharth Haobijam, with Santa Khurai, a trans-woman herself and the Secretary of AMaNA, as Assistant Director and Script Writer, the film seeks to depict how the shaman (Maibi) tradition of Manipur has provided a space for trans women.

Through interviews with three eminent persons, the film takes care to establish the long-standing presence of trans-shamans, known in the local culture as Nupa Maibis. Arambam Memchoubi, a recipient of the Sahitya Akademi and State Lalit Kala Akademi awards for her book Amailon – A Chronicle of Shamanism in Manipur, stresses that male and female shamans have been an indelible part of Manipur’s religious and ritualistic practices since time immemorial. Shamans are persons entirely devoted to the worship of gods and are believed to have special spiritual powers that make them divine oracles. The Maibis play an especially important role in the Lai Haraoba ritualistic festival of the state, believed to foster prosperity and well-being.

Nandini Thokchom, an indigenous peoples’ rights activist, explains Lai Haraoba to be a celebration of the sylvan and ancestral deities; a post harvest festival for people to come together, reaffirm the origins of creation and the people, relax and bond together. Dr. Laifungbam Debabrata Roy, Elder Council President of the Centre for Organisational Research & Education (CORE) and the Convener of the Civil Society Coalition on Human Rights in Manipur and the United Nations, explains that there is no authentic history of the shamans since they have always lived a life somewhat away from the larger society. However, he also emphasises that both male and female shamans have always been there, with the females being called Maibi (female) or Nupi Maibi and the males being call Nupa (masculine) Maibi (female) – a term that indicates the difference between the biologically assigned sex of the person and the feminine gender role adopted by him/her. 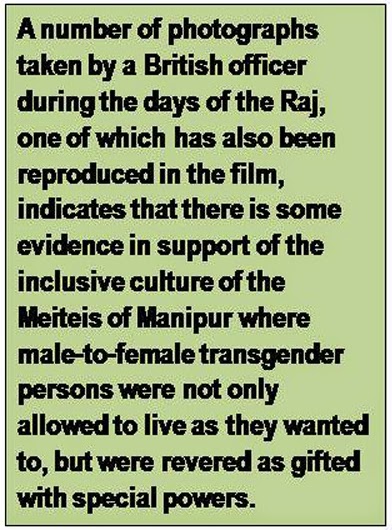 Referring to a number of photographs taken by a British officer during the days of the Raj, one of which has also been reproduced in the film, Dr. Laifungbam indicates that there is some evidence in support of the inclusive culture of the Meiteis of Manipur where male-to-female transgender persons were not only allowed to live as they wanted to, but were revered as gifted with special powers.

The documentary also presents the interview of some Nupa Maibis, both old and young, and through their narratives the viewer comes across how families have reacted differently to having a transgender child. While the narrative of a 57-year old Nupa Maibi talks about the torture at home that led to his/her running away to become a shaman, the father of a 17-year old Nupa Maibi explains why they accept their transgender child as a “gift of god”.

Visually, much of the film captures shamanic rituals, the significance of which is not necessarily clear to viewers outside Manipur. The reference to ‘being possessed’ also remains unexplained and one is left to wonder whether it is just a ploy by trans-persons to escape to the shamanic way of life so that they can take on the desired feminine gender role, or a psychological-spiritual state that actually prompts everyone to accept such persons to be special divine envoys destined to live the life of a Nupa Maibi. The film also does not explain who or which organisations have banned biological males from becoming Maibis, and the strength of such a ban in the larger society. But we do learn from a young trans-shaman that there are places where the male shamans are now being forced to wear the male dhoti instead of the female long-skirt like dress that Nupa Maibis have traditionally worn. This is an imposition that makes the trans-shamans clearly very unhappy.

The technicalities of a documentary of this kind are not the main focus and there is nothing extra-ordinary in the film to deserve special mention. But at the end, one is certainly left wondering what has prompted a movement towards the exclusion of trans-shamans in a culture that has traditionally been accepting and inclusive of male-to-female trans-persons at least in their ritualised lives as shamans. This is pertinent especially when there is a revivalist movement, as Dr. Laifungbam informs us.