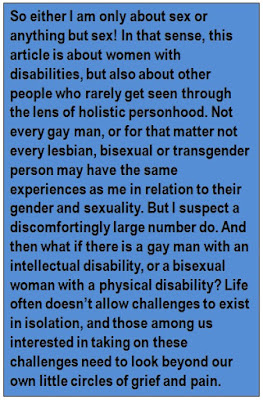 “Erasure as individuals and invisibility as a group – that is the fate of women with disabilities. Teased, taunted, looked down upon, and spoken about instead of spoken to, women with disabilities experience the combined disadvantages associated with gender and disability . . . Autonomy, respect, dignity and equality of personhood are denied to them. Women with disabilities form a heterogeneous group, since disability and gender also intersect with other categories like type of disability, class, caste, ethnicity and rural-urban residence . . .”


Thus reads an opening paragraph of the 12th chapter of a report titled India 4th and 5th NGO Alternative Report on CEDAW (where CEDAW stands for Convention on the Elimination of Discrimination against Women). The chapter, titled ‘Women with Disabilities in India’, was prepared by the Women with Disabilities India Network and shared at the ‘National Seminar on Women and Disabilities: Triumph & Challenges’ organized by Women’s Studies Research Centre, University of Calcutta at their Alipur campus on July 9-10, 2015.

So is this article about women with disabilities? Well, yes and no! The issues highlighted in the opening paragraph are a daily lived reality for many women with disabilities in India. But as I sat there listening to the speakers at the seminar, one particular issue struck a chord a tad more than other issues – the intersection of disability and sexuality, more specifically sexual orientation. Perhaps this had something to do with my own experiences as a gay man – experiences of how people around me viewed me. 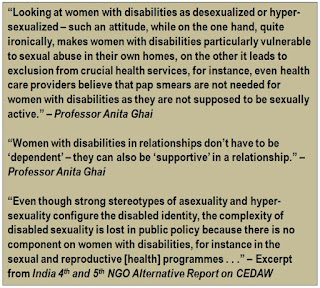 Among several powerful speakers was Professor Anita Ghai, Department of Psychology, Jesus and Mary College, New Delhi, who commented at length on how women with disabilities are either seen as completely desexualized or hyper-sexualized (see inset). As she remarked “Why should sexuality in relation to women with disabilities always be something abusive or violent, why not something healthy and pleasurable?”, it rekindled the memory of a comment made around 15 years ago by a friend and one-time neighbour to other common friends about my supposed sexual proclivities: “Going to his [this author’s] place could be a big risk, god knows what we’ll get to see when the door opens!” Not far behind were thoughts of how several well-meaning family members and relatives today do talk freely with me about my work around gender and sexuality, but never quite about what I could want in life in terms of intimacy and relationships.

So either I am only about sex or anything but sex! In that sense, this article is about women with disabilities, but also about other people who rarely get seen through the lens of holistic personhood. Not every gay man, or for that matter not every lesbian, bisexual or transgender person may have the same experiences as me in relation to their gender and sexuality. But I suspect a discomfortingly large number do. And then what if there is a gay man with an intellectual disability, or a bisexual woman with a physical disability? Life often doesn’t allow challenges to exist in isolation, and those among us interested in taking on these challenges, including Varta readers (irrespective of whether they are human rights activists or not), need to look beyond our own little circles of grief and pain.

The seminar mentioned earlier dwelt upon a range of issues, including lack of comprehensive data on women with disabilities and the international and national legal frameworks through which their concerns around bodily autonomy, legal capacity to take decisions, health, education, employment, shelter, protection from violence (physical, emotional, sexual), marriage, motherhood, family life and accessibility (again not just physical but also access to information, communication and services) can be dealt with. Varta is committed to highlight these aspects in future issues to come, as it already does through a bi-monthly column written by gender and disability rights activist Shampa Sengupta and other articles (check articles tagged ‘disability’).

“People who care for women with disabilities or other people with disabilities should care to ask what they want” – this too was heard at the seminar. I leave you with this thought, which echoes also through some of the other articles in this issue of Varta – in other contexts, but ultimately all in the context of humanity.

Pawan Dhall aspires to be a rainbow journalist and believes in taking a stand, even if it’s on the fence – the view is better from there!
Posted by Varta at 02:36