Common cause, kiss of freedom in Kolkata pride!


The ‘14th Kolkata Rainbow Pride Walk’ on December 13, 2015 was many things for many people – an expression of not just queer pride but also solidarity with diverse social causes. Demanding intolerance for social exclusion of any kind, it broke new ground with participation by many youth and student groups and a ‘Hok Chumban’ / ‘Kiss of Love’ campaign at the end to protest moral policing anywhere and everywhere. While the walk route took Pawan Dhall down memory lane to 1999 (the year of the ‘1st Kolkata Rainbow Pride Walk’), Prosenjit Pal celebrated his very first queer pride walk in his home town with camera in hand.

The starting point was outside Deshbandhu Park near Shyambazar five-point crossing in North Kolkata. While the park itself was taken over by a political party function, the walk participants gathered quietly outside. But the celebratory roar with which the walkers started off at 2.30 pm couldn’t have been captured by a photographic camera! 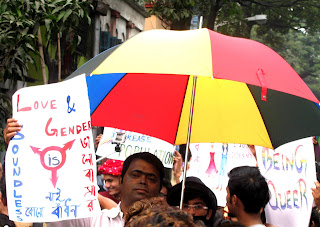 Youth (including college and university students) and women’s participation was a standout feature of this year’s walk – an important mobilization milestone in the 14-year history of the walk. 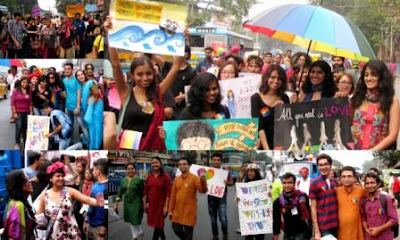 The Kolkata walk, at least sections of it, joined its counterparts in Hyderabad, Bangalore, Delhi and elsewhere in recognizing and highlighting intersections between the human rights struggles of queer communities and other marginalized sections of society. Cries of “Lesbian mange aazadi . . . Irom [Chanu Sharmila] mange aazadi . . . Kashmir mange aazadi . . .” rent the air. But more introspection on how the queer movements can join hands with these and issues of class may be a good idea. 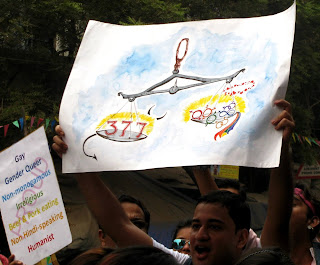 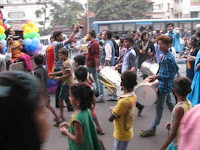 For starters, how about involving the street children in a more respectful and fun manner in the walk? They are possibly the only ones who ‘participate’ every year out of sheer childlike excitement and without being mobilized! Not to forget the young drummers who are as much part of India’s ‘demographic dividend’ as the students who came from Jadavpur University, Indian Institute of Technology, Kharagpur or West Bengal University of Juridical Sciences. Similarly, encouraging more people, young and old, from the smaller cities and villages of West Bengal and other states to participate remains a challenge.

At the start, the walk strength was a couple of hundreds. But as it wound its way through Acharya Prafulla Chandra Road and reached the end point at Moulali Ramlila Maidan, the numbers swelled to around 1,500 – a sea of humanity full of colour, energy and hope in defiance of socio-legal stigma, discrimination and criminalization. 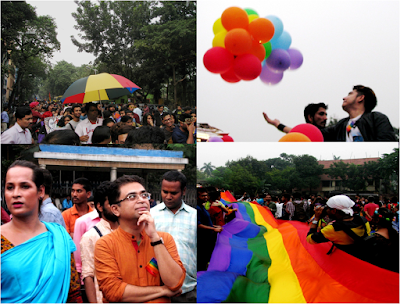 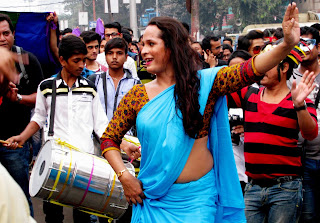 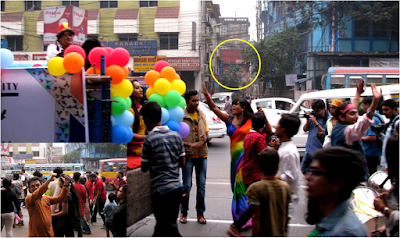 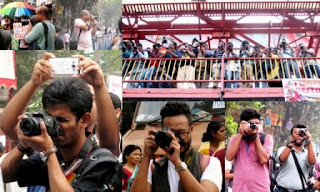 The masks were there, but on a hunch, far fewer than in the past walks, while family members, friends and colleagues of queer individuals seemed to have become a regular feature of the walk. 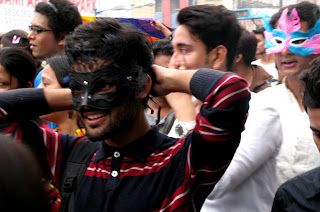 Among the many inspiring speeches made during the public meeting at the end point (Moulali Ramlila Maidan) were those of queer activist Sayak Manna (extreme left) who spoke about building bridges across different sections of society; disability and gender rights activist Shampa Sengupta (centre), who was thrilled to be back at her childhood playground and called for an in-depth dialogue between social movements; and mathematics professor Pratulananda Das, who urged queer teachers to think about coming out to help themselves and their students. 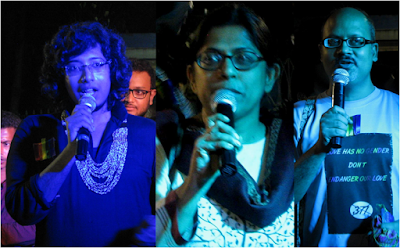 Around two dozen couples, threesomes and foursomes – across genders and sexualities – kissed friends and loved ones in varying degrees of passion as a symbol of protest (an extension of the ‘Kiss of Love’ campaign) against moral policing that affects anyone who steps beyond supposed norms of culture and decency in matters ranging from choice of clothes and public display of affection to gender and sexual expression, relationships, family structures and even literary and artistic works.

A round of foot-tapping musical numbers brought the curtains down on a well-organized event by 6 pm. The move to shift the walk from the traditional months of June / July to December seemed to have paid off in terms of the number of participants. All in all, a job well done by the organizers, whether individual volunteers or those from various community groups and NGOs, who ensured everything from police permissions, decorations and music to drinking water and crowd management during the walk.

When not researching Parkinson’s disease as part of his PhD from the University of Calcutta, Prosenjit Pal is busy with poetry, painting, music and films. Pawan Dhall aspires to be a rainbow journalist and believes in taking a stand, even if it’s on the fence – the view is better from there!
Posted by Varta at 01:26