Intimate dreams and relationships can be disrupted by partner violence. A look at the legal remedies available

I am researching intimate partner violence in the context of men in sexual and romantic relationships with other men. If a man is beaten up by a same-sex intimate partner, under what section of the Indian Penal Code (IPC) can the culprit be punished?
Sameer, Kolkata


Law follows the progress of society and gets amended or enacted as per the requirements of the contemporary society. At times the law precedes social acceptance, like the law against the practice of sati (a funeral practice in India – last heard of in the late 1980s – in which a recently widowed woman is supposed to immolate herself on her husband’s funeral pyre). At other times, the law is framed to keep pace with the changing times, like the Information Technology Act, 2000.

Though, for quite some time, adult Indians were making a choice of living together without getting married, it was only in the Protection of Women from Domestic Violence Act, 2005 that for the first time Indian law recognized the live-in relationship, describing it as a “relationship in the nature of marriage”.

Marriage, however, has to be understood to mean a heterosexual matrimonial tie between a man and a woman, more precisely a biological male and a biological female. A complaint under the said Act can be lodged only by a woman and against the husband or the male partner and his relatives. This clearly shows that the principal offender has to be a man and the aggrieved person, a woman. Therefore the said Act cannot be used in case of domestic violence between same-sex couples. It is to be seen how the courts, in the days to come, interpret the Supreme Court judgment in the National Legal Services Authority Versus Union of India and Others case regarding the issue of male-to-female transgender persons who identify as women and often face violence from their male partners. 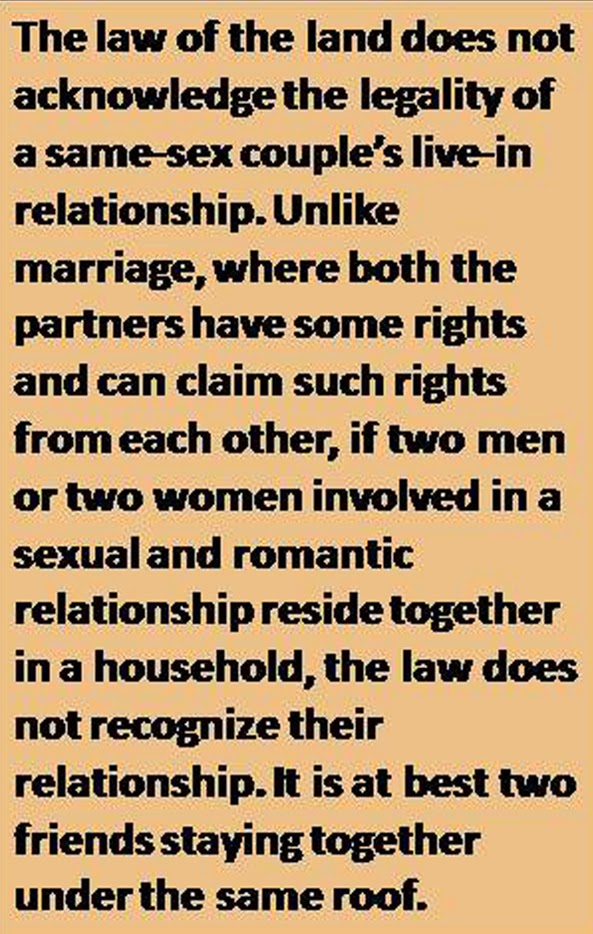 The law of the land does not acknowledge the legality of a same-sex couple’s live-in relationship. Unlike marriage, where both the partners have some rights and can claim such rights from each other, if two men or two women involved in a sexual and romantic relationship reside together in a household, the law does not recognize their relationship. It is at best two friends staying together under the same roof.

If one of the ‘friends’ beats up the other, the recourse to law is the same as in the case of an assault by a stranger. Depending on the nature and extent of the injury, the victim can go to a government hospital, get a medical check-up done and receive treatment. At the time of the medical check-up, the victim must inform the doctor about the cause of injury and give the details of the person who caused the injury. The nature of the relationship might also surface in the course of the investigation.

With the medical check-up report, the victim can approach the local police station within whose jurisdiction the assault was committed, and a First Information Report (FIR) can be lodged. If the injury is not so serious, then the accused will be granted bail at the time of arrest under Section 232 of the IPC, 1860. But if the injury is grievous, then the matter becomes a non-bailable offence under Section 326 IPC. Depending on the nature, extent and intent of the attack, Section 307 IPC, which punishes an attempt to commit murder, can be added which is also a non-bailable offence.

Kaushik Gupta is a lawyer by profession, a photographer by passion, and happy to answer your queries on legal matters around gender and sexuality. Write in your queries to vartablog@gmail.com, and they will be answered with due respect to confidentiality.
Posted by Varta at 08:30