In the imaginarium of Karan Johar

Recently while surfing TV channels, I chanced upon a talk show featuring Karan Johar and his lead pair in Bombay Talkies, Randeep Hooda and Saqib Salim, filmmakers Onir and Sridhar Rangayan. The show was being compered by Anupama Chopra. It was about the depiction of ‘alternate sexuality’ in Bollywood. When a popular TV channel presents a talk on depiction of sexuality in films, it does mean that such discussions grab eyeballs because TV today caters only to the market! So great! But why the term ‘alternate’? Who decides what is mainstream and what isn’t? Isn’t that a paradox? You are celebrating the presence of desires of all hues in the mainstream and then you are also marginalizing those very desires with a certain terminology!

But let’s shift the spotlight to the film, rather Karan Johar’s project to win the ‘meaningful filmmaker’ tag. First the positives: Superlative performances by the three leads, intelligent use of Bollywood classic numbers, and some smart dialogue here and there. And the homosexual men do not spend hours in front of the mirror, do not huff and puff and are not caricature fashionistas in designer shades.

Let me qualify my remark here. There are homosexual men who are not masculine in the ‘dictionary sense’ and there are plenty of gay fashion designers, but their mindscapes cannot be reduced to just dressing up and men-hunting. And yes, not all homosexual men are designers and some are quite masculine in the ‘dictionary sense’. But that’s that. And that’s where the ‘meaningful’ in the film ends, and a new set of stereotypes begin.

Because Karan Johar’s first gay man is a stalker. He uses his sexuality as the trump card to succeed at work. And his second is closeted, married and a jerk, indifferent to his wife’s emotional and physical needs. He is so repressed that he hits the stalker after kissing him. Then goes back and tries to make love to his wife to further repress his desires. And the stalker is also a cad and spills the closeted man’s secret to his wife, while she is in a meeting, not caring that she will feel humiliated in front of her colleagues. And this in spite of the fact that he and the wife were friends!

It isn’t that all homosexuals are emancipated individuals. Many are married with kids and lead double lives. But is that a comment on their hypocrisy or on the society and the family which denounces homosexuality and forces them to remain closeted? If meaningful was what Karan Johar aimed at, couldn't there be even a hint of an exploration of the familial background of the married man and what led him to conform to a society imposed gender role? 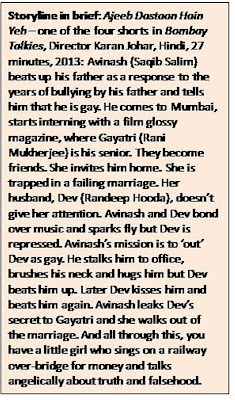 Karan Johar could have gone to his fellow Bombay Talkies director Zoya Akhtar’s best friend Reema Kagti for notes. For, she made that lovely nuanced film Honeymoon Travels Private Ltd. where two married men develop a bond. Through subtle dialogues, we witness the characters’ backgrounds which explain their behaviour. And one guy comes out to his wife and becomes friends with her and the other one re-evaluates his bond with his wife, and the filmmaker ends that track on a note of delicious ambiguity. But Karan Johar has the subtlety of a sledgehammer. So his man has to keep harping a hundred times through the film’s running time of 27 minutes that he is gay!

It isn’t that homosexual men can’t be manipulative or obsessive. And to that extent, Karan Johar has narrated the story of a gay man who stalks another man. But when the world’s largest film industry produces so few films featuring gay characters, and then when it does, the characters are negative, the question of the politics of representation arises. What signals do such films send out to the masses, whose exposure to such issues is only the mainstream media?

A question here: Do you view the corruption committed by your milkman who dilutes your milk with water and your telecom minister with the same lens? The point is just this. First, create a level playing field and then bring on as many ambiguities and ambivalences. Till this is done, Karan Johar’s film is not a simple story with gay characters. It is rather homophobic. At the film’s screening at Cannes, he defended the film saying that Saqib Salim’s character had become destructive because of his violent father who used to beat him up. So his film is about faulty parenting! Let’s run a survey here. How many homosexuals or even heterosexuals have not faced any form of abuse as a child or adolescent? The answer could be almost nil. So does that mean that everyone abused grows up to be a stalker?

Now, the third lead, Rani Mukherjee, who plays the wronged wife. Another cardboard cut-out. She dons make-up for her husband and when she finds out his ‘dirty secret’, she removes the make-up and says she is free. But soon, she is seen applying thick paint again and it seems she is on the look-out for new men!

A few days back, I chanced upon a commercial of a vagina tightening gel. In a joint family set-up, we see a woman dancing with her husband and cooing, “I feel like a virgin!” A new low after the vagina whitening cream and the fairness products – while newspapers and magazines carry out surveys which claim that most people in the cities feel that virginity is overrated and more and more women are having pre-marital sex, here we have a commercial that celebrates a woman’s virginity, under the garb of celebrating her desires. The question why should women be expected to keep such ‘moralistic standards’ is rendered pointless. The market only furthers the patriarchal agenda of controlling the woman’s body, ensuring that she retains her ‘virginity’ for her male sexual partners (the ad uses the image of a flower becoming a bud)! In the end, no apple cart is disturbed. Just from one box to the next.

Similarly, Rani Mukherjee’s character is not a homemaker. She has a career. But that’s where her emancipation ends. Her life will still depend on winning male attention.

Finally, there’s one point that seems to have gone completely unnoticed. Right at the beginning of the film, the stalker beats up his father and tells him that he is gay and not a chhakka! True that ‘gay’ and ‘chhakka’ (or more respectfully Hijra) are not the same thing. But the sense conveyed by the stalker’s dialogue is derogatory and why is nobody sniffing transphobia here?

Senior Editor with Kindle Magazine, Sayan Bhattacharya loves labels like queer feminist, film buff and humour junkie, but isn’t sure of using them. He can be reached at sayan@kindlemag.in.
Posted by Varta at 06:00