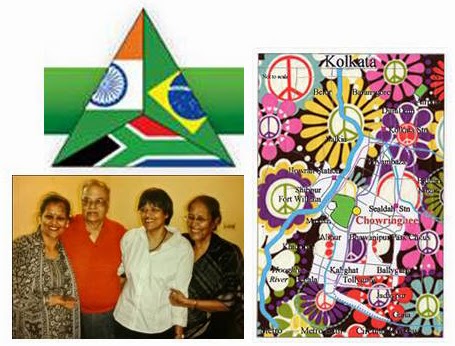 Abilities have a way of existing in the most unexpected of places, circumstances and people. This issue of Varta is an assortment of display of various abilities. In Remembering a Friend, Philosopher, Guide, we carry excerpts from an interview with the late Kusum Gupta, a women’s and child rights activist, who surmounted odds around gender and class inequity to enable other women and their children lead better lives. In Insight into Incitement, the story is about pushing back State impositions on the freedom of speech and expression. Kaushik Gupta answers a query around the striking down of Section 66A of the Information Technology Act, 2000 by the Supreme Court of India.
Read more »
Posted by Varta at 21:39 No comments:

Insight, Policy Matters, Apr '15
One year on since the Supreme Court of India’s judgement on transgender identities and rights, implementation of the verdict in right earnest is still awaited. But the momentum is gradually building on trans health issues internationally. Excerpts from a paper by Debjyoti Ghosh comparing the health status of transgender people across the three IBSA countries – India, Brazil and South Africa. The paper titled Transing Health: A Step towards Examining the Right to Health for Trans* People in India, Brazil and South Africa is a work in progress.

“Those of like habits and temperament form friendships” – Panchatantra

In this first in a new series of articles on disability, Shampa Sengupta explains that disability is as much about attitudinal and environmental barriers as impairments

It is difficult to define ‘disability’. Disabled, impaired, handicapped, crippled – all these words are often used to mean the same. These days, there are more flowery words like ‘differently abled’ or ‘specially challenged’. However, the politically correct term that the disability movement endorses is ‘persons with disabilities’. The connotation of the word disability has also undergone several changes in recent times. At present we believe that disability is an evolving concept and we are still learning the nuances of the word. The United Nations (UN) adopted the Convention on the Rights of Persons with Disabilities in December 2006, which in short is called UNCRPD. According to the UNCRPD, “disability is an evolving concept” and that “it results from the interaction between ‘persons with impairments’ and ‘attitudinal and environmental barriers’ that hinders their full and effective participation in society on an equal basis with others”.

People, Apr '15
An ‘agent of change’ seems to sum up late Kusum Gupta rather well. One year on since she left behind family, friends and colleagues forever, Pawan Dhall flips through papers of an unpublished interview with her from 2002

In 2002, the Marwar magazine was looking to profile Marwari women who were questioning the status quo around gender inequity in their communities through their work in different spheres. A journalist friend with the magazine requested me to interview Kusum Gupta for the unconventional and brave stand she had taken around women, children and queer rights, even if this was in circles away from media attention. It turned out to be an interview that lasted several memorable hours. I could never get around to writing it out and submitting it for publication. But April 7, 2015, her first death anniversary seemed like a good occasion to retrieve some of her comments from the interview notes, as close to verbatim as possible. The interview papers also included a short note Kusum Gupta wrote to describe her work and what she felt were her “achievements”. Her thoughts and beliefs may have changed over the years since the interview, but what she said or wrote in 2002, political incorrectness and all, still has relevance.

We bring you the third and final part of an interview with journalist SD, 62, who shares 50 shades of queer in Kolkata since the 1950s. In the first two parts of the interview (published February and March 2015 issues of Varta), he spoke about life in school, his years in college, about his workplace and his understanding of the gender fluidity inherent in Indian traditions. In this part, we see a glimpse of sexual networking in Kolkata in the 1970s and 1980s, the interviewee’s love life and his take on the argument that homosexuality is a western import.
Read more »
Posted by Varta at 21:00 No comments:

While striking down Section 66A of the Information Technology Act, 2000 on March 24, 2015, the Supreme Court said that freedom of speech and expression has three components – discussion, advocacy of a cause and incitement, and that only incitement should be punishable. But how does one differentiate between the three? And if Section 66A is gone, how will incitement be dealt with?
Anonymous, Kolkata
Read more »
Posted by Varta at 21:00 No comments: