In this first in a new series of articles on disability, Shampa Sengupta explains that disability is as much about attitudinal and environmental barriers as impairments

It is difficult to define ‘disability’. Disabled, impaired, handicapped, crippled – all these words are often used to mean the same. These days, there are more flowery words like ‘differently abled’ or ‘specially challenged’. However, the politically correct term that the disability movement endorses is ‘persons with disabilities’. The connotation of the word disability has also undergone several changes in recent times. At present we believe that disability is an evolving concept and we are still learning the nuances of the word. The United Nations (UN) adopted the Convention on the Rights of Persons with Disabilities in December 2006, which in short is called UNCRPD. According to the UNCRPD, “disability is an evolving concept” and that “it results from the interaction between ‘persons with impairments’ and ‘attitudinal and environmental barriers’ that hinders their full and effective participation in society on an equal basis with others”.

In India, we did not have a separate law for persons with disabilities till 1995. Though we inherited the Indian Lunacy Act, 1912 from the British Raj days, which we amended in 1987 and renamed as the Mental Health Act, we also formulated the Rehabilitation Council of India Act in 1992. This law was enacted with the objective of setting up the Rehabilitation Council of India, which would regulate the training of rehabilitation professionals like special educators and therapists who work with persons with disabilities. I found this extremely interesting how even before we thought of having a law for persons with disabilities themselves, we formulated one for rehabilitation professionals. This is precisely the mindset that does not put forward human beings who are disabled foremost, but instead looks into their treatment as the main objective. This reflects that India not only considers persons with disabilities as objects of charity but also thinks it is important to ‘rehabilitate’ them rather than change social perceptions that don’t support any form of diversity.

In 1995, India enacted the Persons with Disabilities (Equal Opportunities, Protection of Rights and Full Participation) Act. This law, which is still in force, said that disability meant “blindness, low vision, leprosy cured, hearing impairment, loco motor disability, mental retardation and mental illness”, and also said that “person with disability means a person suffering from not less than 40% of any disability as certified by a medical authority”.

As we read these definitions today, we understand that a medical model was used to understand disability and the significant role of society, which was crucial for understanding the concept of disability, was completely missing. However, after the ratification of the UNCRPD, it became imperative to change all the disability related laws. So apart from the three pieces of legislations mentioned above, the National Trust Act, which was enacted in 1999 for the welfare of persons with mental retardation, autism, cerebral palsy and multiple disabilities, also needs to be amended. 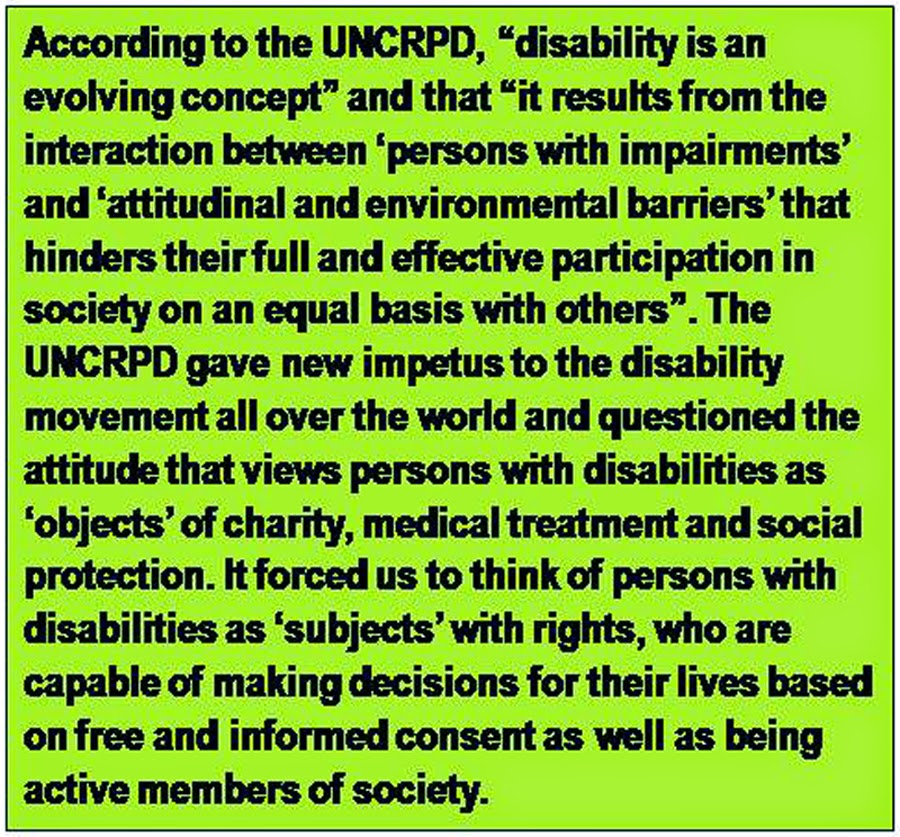 Unfortunately, changing the laws alone will not ensure a change in the mindset. Recently, I received a phone call from a student of a prestigious university in Kolkata. She was an intern with an esteemed organisation and wanted to interview ‘differently abled’ people who were employed. I asked her whether she wanted to interview people who were in the government sector or the private, and whether her project was about employment of the disabled in the organised sector alone. She was totally baffled – she said any employed disabled person would do. I shared the phone numbers of a few people and the student called and asked them to share their life stories over the phone itself!

The student’s complete lack of sensitivity and information about the issue was difficult to accept. Neither her education (her university was one of the few in West Bengal with a special cell for higher education for persons with special needs), nor the organization where she was an intern had made her aware about the seriousness of the issue she was working on. The organisation in question champions diversity and human rights, but is it only so it can claim to have included different issues in its projects (in this case disability)?

From the State to the common people on the streets, attitudes towards disability remain the same – that of charity. But everything is not bleak and one can see a large number of persons with disabilities coming together to demand their rights. It is their movement that made the Indian government sit up and draft the Rights of Persons with Disabilities Bill 2012 as well as the Mental Health Care Bill 2013 – both were presented in the Rajya Sabha during the UPA-II regime (the previous Manmohan Singh-lead government at the Centre). It is this movement that is bringing in changes in laws and policies. It is their coming together that will pressurize also the civil society to take note and consider persons with disabilities as citizens with similar rights and duties as everyone else.

Shampa Sengupta is a Kolkata-based activist working on gender and disability issues for more than 25 years. She is the founder of an advocacy group called Sruti Disability Rights Centre and is Executive Committee Member, National Platform for Rights of the Disabled. She will be happy to answer your queries on disability and related issues. Write in your queries to vartablog@gmail.com, and they will be answered with due respect to confidentiality.
Posted by Varta at 21:00