Insight, Policy Matters, Apr '15
One year on since the Supreme Court of India’s judgement on transgender identities and rights, implementation of the verdict in right earnest is still awaited. But the momentum is gradually building on trans health issues internationally. Excerpts from a paper by Debjyoti Ghosh comparing the health status of transgender people across the three IBSA countries – India, Brazil and South Africa. The paper titled Transing Health: A Step towards Examining the Right to Health for Trans* People in India, Brazil and South Africa is a work in progress.

“Those of like habits and temperament form friendships” – Panchatantra


The Global South has seen the emergence of some world leaders in the last two decades. This has led to the formation of parallel platforms of politico-economic cooperation to the older basket of platforms such as the United Nations, the World Trade Organisation, and all others which are essentially dominated by the demands of the Global North, where certain Western powers dominate the rhetoric. The failure of the Cancun Talks was possibly a turning point in a world which was post-Cold War and post-9/11. Through this, emerged a basket of South countries which started challenging the hegemony of the North countries. The stances taken by some of these countries at the Cancun Talks were merely the foundation stones for a future partnership and a new non-aligned movement, such as the trilateral diplomatic partnership of India-Brazil-South Africa. Often called the ‘new Middle Powers’, they act as catalysts or facilitators for building new coalitions or managing specific regions.

The Classic Middle Powers have, through successful negotiations between the two original blocs, managed to gather great decision-making power with the Great Powers. However, they are not of the break-away questioning mindset, for they accept the hegemonic Western multilateralism, and are situated within the formal and informal frameworks such as the International Monetary Fund, the World Trade Organisation and various other bodies. 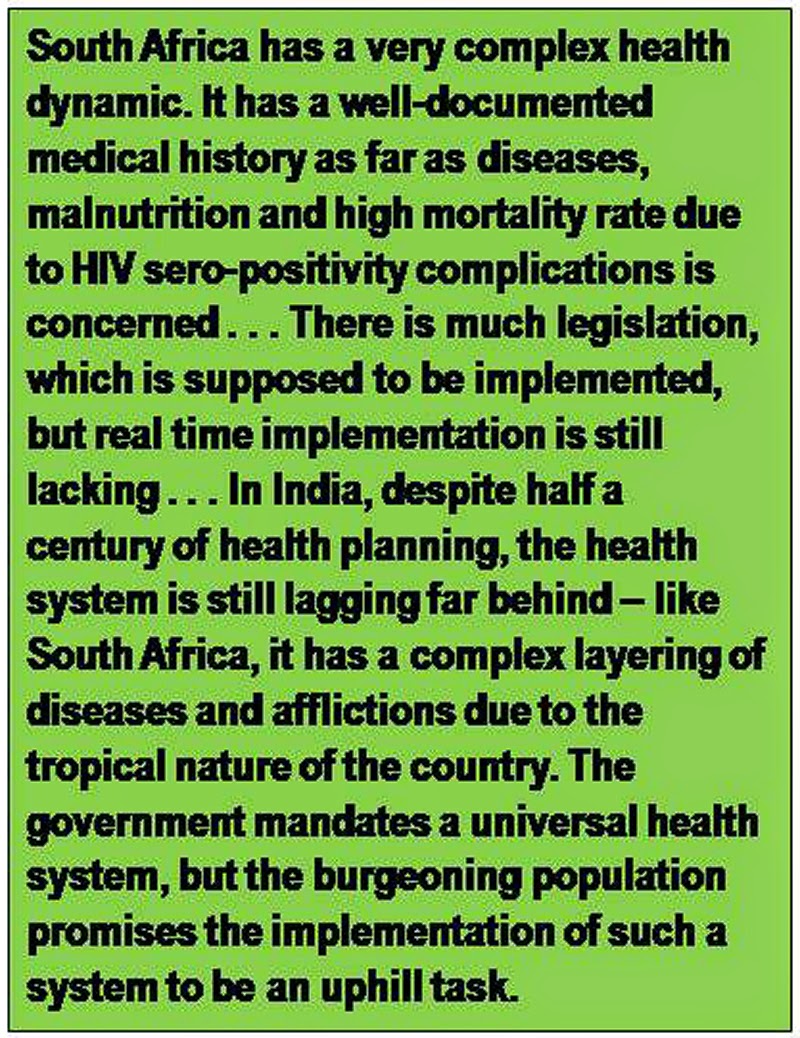 The new Middle Powers, however, are using the ideological tools of multilateralism, such as the sovereign equality of States along with allocation of positions as per each State’s resources and capacity, thus furthering their interests. They are utilising their newfound developing state to their advantage and creating regional platforms or platforms within which they are generally the speaking powers. Examples of these are South Asian Association for Regional Cooperation (SAARC), South African Development Community and Mercado Comum do Sul (MERCOSUL). Local actors are forced to come into play, but in a subordinate role to the Middle Powers on these platforms.

The platform explored here, formed by India, Brazil and South Africa, was formed for similar goals but different rationales, due to their history, economy, internal political situations as well as their regional ambitions.

The formation of IBSA: The Declaration of Brasilia was signed in June 2003 by the Foreign Ministers of India, Brazil and South Africa. In September 2003, the three heads of State at the time presented IBSA at the United Nations General Assembly. While this forum is to promote cooperation in all areas of defence, trade, technology, social and environmental development, it has an important role to play in fostering further South-South cooperation. With the setting up of the Trilateral Commission and a Trilateral Business Council comes the formation of a stepping stone for further cooperation among developing countries, and a shared acknowledgement of the slow failure of the older institutions of global governance, where they see a way of re-legitimising them through regional representation while positioning themselves in seats of power within the United Nations. The three countries together represent a GDP of $1.1 trillion. Thus, they already know that economically, decisions taken by them together will affect the global platform.

Health and IBSA: Health has been a core issue for both developing and developed countries. When it comes to the IBSA, each of the countries have often fought or are still fighting similar battles with different epidemics / pandemics, which ask for similar but contextualised solutions, despite their many differences. One common goal for all three, however, has been to arrest the spread of HIV/AIDS.

South Africa has a very complex health dynamic. It has a well-documented medical history as far as diseases, malnutrition and high mortality rate due to sero-positivity complications is concerned. HIV prevalence shot up by 20% from 2001 to 2011, and the public health system, albeit partially funded by the government is stretched to its limit. There is much legislation, which is supposed to be implemented, but real time implementation is still lacking. However, the government has recorded a lowering of mother-to-child transmission rate from 2011. 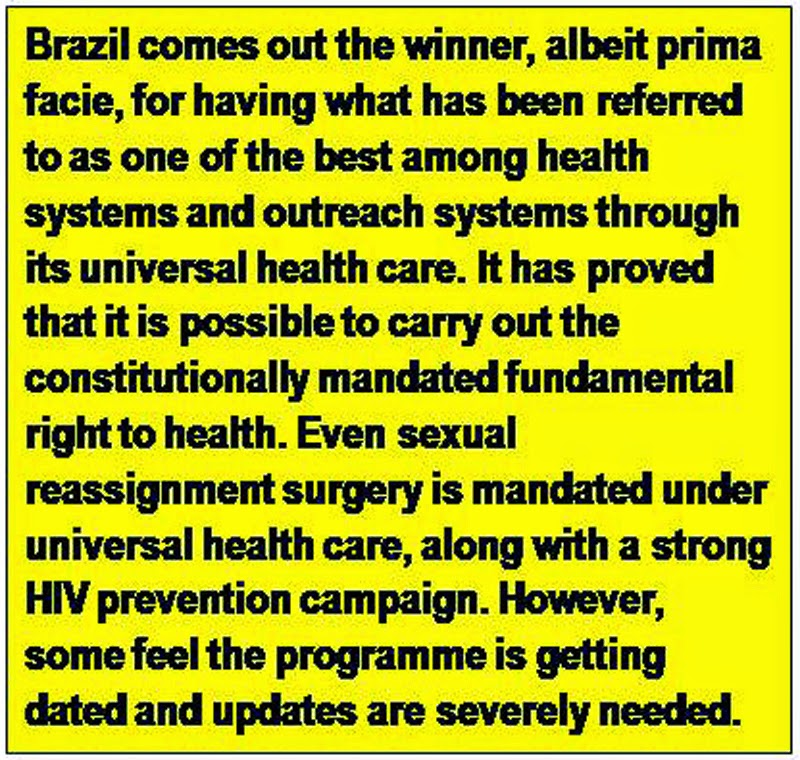 In India, despite half a century of health planning, the health system is still lagging far behind – like South Africa, it has a complex layering of diseases and afflictions due to the tropical nature of the country. The government mandates a universal health system, but the burgeoning population promises the implementation of such a system to be an uphill task. It is estimated that about 0.36% of the population is HIV positive. However, the government implemented a strong HIV control and prevention programme despite cultural odds, and is carrying the programme on from strength to strength, though the other areas suffer. States are allowed to spend their health budgets in region-specific programmes, such as Tamil Nadu has initiated sexual reassignment surgery for trans people. An epoch making judgment by the Supreme Court of India in early 2014 has created the legal space for the ‘third gender’ – it not only mandated the inclusion of third gender as a recognized category in law, but also called for sweeping changes across all legislations, including the right to marry. Some educational institutions have started including the third gender category in their admission mandates, but the overall sweeping changes are yet to be seen.

Brazil comes out the winner, albeit prima facie, for having what has been referred to as one of the best among health systems and outreach systems through its universal health care. It has proved that it is possible to carry out the constitutionally mandated fundamental right to health. Even sexual reassignment surgery is mandated under universal health care, along with a strong HIV prevention campaign. However, some feel that the programme is getting dated and updates are severely needed.

Trans people and IBSA: The term Trans is used to name people who identify themselves in a different gender than that they physically possess. Their biological gender, assigned to them at birth, and emotional gender differ from each other. In conditions where they can, they prefer representing themselves in the gender they feel, through clothing, accessories, cosmetics or body modification. Trans people include, but are not limited to, transsexual and transgender, transvestite, travesti, hijra, cross dresser, fa'afafine, two-spirit, no gender, third sex and genderqueer people (Global Action for Trans* Equality report, 2011). The term is more of a political term rather than a particular gender-type. Generally it is written with an asterisk (as in Trans*), to encompass the variety of identities that can come within . . .

The needs of trans people, universally, can be summed up in three phrases: Depathologization, access to health care, and access to legal recognition.

Depathologization: Trans people have been always pathologized, thus making their lives dependent on a prognosis – even for legal gender recognition. This takes away from the bodily autonomy that humans have, and reinforces the divide between healthy and pathologized lives to be led depending on gender. However, it has been agreed that on many occasions, pathologization may be the only way to get sexual reassignment surgery as a necessity, and not just an elective cosmetic change.

Access to health care: Trans people, across the world, require specific diagnosis in order to be able to access health care, especially for transitioning between bodily genders. Moreover, trans-sensitivity is lacking in many places along with technical knowledge on the side of health care professionals.

Looking at different gender phenomena within IBSA: In India, there is a cultural phenomenon where a lot of male-to-female transgender people live together in a clan and call themselves hijra. These clans are not exclusively for male-to-female trans people, but also for cis-gendered people who feel a sense of belonging to the clan. These clans practice their own rituals and rites, and generally live separately from mainstream society. They earn mostly through celebrating at births and weddings, where they are given gifts of money in exchange for their blessings. However, they also go begging, and often are forced to resort to sex work to make ends meet. There are many trans people who do not subscribe to this cultural phenomenon, and are often part of the mainstream queer movement. 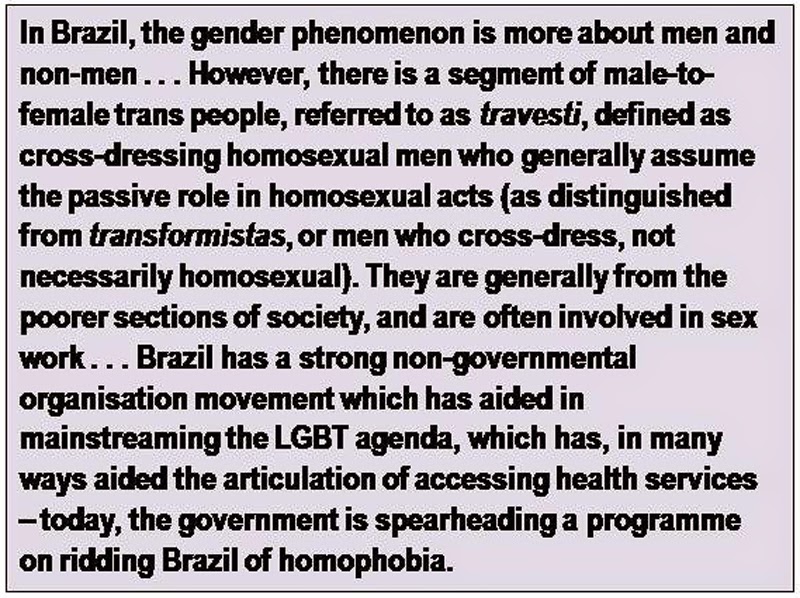 In Brazil, the gender phenomenon is more about men and non-men. Trans health issues feature on the country’s health agenda. Sexual reassignment surgery is a part of the universal health care system. However, there is a segment of male-to-female trans people, referred to as travesti, defined as cross-dressing homosexual men who generally assume the passive role in homosexual acts (as distinguished from transformistas, or men who cross-dress, not necessarily homosexual). They are generally from the poorer sections of society, and are often involved in sex work. However, Brazil has a strong non-governmental organisation movement which has aided in mainstreaming the LGBT agenda, which has, in many ways aided the articulation of accessing health services – today, the government is spearheading a programme on ridding Brazil of homophobia.

In South Africa, the trans movement is yet to be forcefully articulated – the national health programme has not included trans health issues in it, and the non-governmental pressure is mounting on them. However, at the same time, sexual reassignment surgery has been legal for many years – but used in apartheid South Africa as a corrective measure to cure homosexuality, and forced on people.

However, a common phenomenon in all three countries is that trans people, specifically male-to-female trans people, are considered to be a part of the high risk category for sero-positivity, along with men involved in sex with other men.

Conclusion: Trans people are doubly marginalised, irrespective of where they are. On a daily basis, we get to read about suicides and hate-murders of trans people from various countries. In developing countries, where the rhetoric around them is more about the medicalized gaze rather than the humanised gaze, it is important to create a socio-legal space for them to be able to claim their rights.

My exploration of this field will include, but will not be limited to, finding out the different barriers faced by trans people in trying to claim their rights, what social determinants are overridden due to the poverty of socio-legal and policy articulation, and how it impacts them.

This work aims to open up the doors on socio-economic rights rhetoric for the queer community, and hopefully shall shed light in what steps need to be taken for a more inclusive future.

Debjyoti Ghosh is a human rights lawyer from Kolkata, India. After practicing general law for a brief period, he went whole-hog into human rights and started working in the NGO sector in eastern India. He has worked on issues of HIV/AIDS, women, children and sexual minorities. Currently, he is an SJD Scholar at Central European University, Budapest. His research pertains to constitutional rights in the Global South, more precisely the right to health in India, Brazil and South Africa for trans people.