Pawan Dhall and Madhuja Nandi report on the historic Supreme Court verdict on transgender identities and rights, and happenings around the verdict

Kolkata, April 16, 2014: Bengali New Year day on April 15, 2014 lived up to its ‘new’ factor in true spirit of the word when the Supreme Court of India declared that every citizen of India had the right to determine and express their gender, even if it was beyond the binary of man and woman. According to a media release issued by human rights agency Lawyers Collective, in a path-breaking judgment, the Supreme Court affirmed the constitutional rights and freedoms of transgender persons, that is, those who identify with a gender different from their biological sex (for example, a person assigned male at birth who identifies as a woman or vice versa) as well as those who do not identify as either man or woman but as ‘third gender’ (for example, a Hijra person).

The judgment was pronounced in National Legal Services Authority (NALSA) Vs. Union of India and Others [Writ Petition (Civil) No. 400 of 2012 (‘NALSA’)] by a Division Bench of Justices K. S. Radhakrishnan and A. K. Sikri. Filed in September 2012 by NALSA, the writ petition had sought several directions from the Supreme Court, including granting of equal rights and protection to transgender persons, inclusion of a third category in recording one’s gender or sex in identity documents like the voter identity card, passport, driving license and ration card, and for ensuring no denial of admission of transgender persons into institutions like schools, colleges and hospitals. Lawyers Collective had filed an intervention on behalf of co-petitioner Laxmi Narayan Tripathy, a Hijra activist.

The judgment’s reasoning rested on two broad strands of human rights – freedom and equality. Underscoring the right to personal autonomy and self-determination under Article 21, the Supreme Court observed that “the gender to which a person belongs is to be determined by the person concerned”. The decision recognises the right of a person to identify in the gender that they relate to, that is, male, female or third gender, irrespective of medical or surgical intervention by health care providers and the family members of the person to assign them a particular gender at any point of time in their life.

The Supreme Court also protected one’s gender expression by invoking the freedom of speech and expression under Article 19(1)(a) and held that “no restriction can be placed on one’s personal appearance or choice of dressing, subject to the restrictions contained in Article 19(2) of the Constitution”. In addition, the Supreme Court firmly secured the right to equality and equal protection for transgender persons under Articles 14, 15 and 16 by prohibiting discrimination on the grounds of gender identity. It broadened the scope of the term ‘sex’ in Articles 15 and 16, which till recently meant biological sex of male and female, to include ‘psychological sex’ or ‘gender identity’.

Significantly, the Supreme Court also declared that no one can be discrimi-nated against on grounds of sexual orientation (which is about one’s sexual and romantic attraction, that is, which biological sex or gender one is attracted to).

Freedom and equality were further strengthened by the Supreme Court’s observations on dignity, privacy, personhood and the free spirit of the human being, which are necessary for the “human personality to flower to its fullest”. The verdict emphatically noted that dignity could not be realized if a person was forced to grow up and live in a gender that they did not identify with or relate to. This was in sharp contrast to the Supreme Court’s earlier verdict in December 2013 on Section 377 of the Indian Penal Code where it upheld the constitutionality of Section 377, in letter criminalizing non penile-vaginal sexual acts irrespective of sexual orientation or gender identity, but in spirit or actual impact criminalizing the very personhood of lesbian, gay, bisexual, transgender and other queer persons.

The implications of the NALSA judgment are far-reaching. With legal status accorded to identifying with a gender of one’s choice (man, woman or third gender) irrespective of one’s biological sex, a person’s sense of gender can now match their official gender identity, without any certificate from a doctor or proof of having undergone sexual reassignment surgery (SRS), as the Supreme Court clarified that “any insistence for SRS for declaring one’s gender is immoral and illegal”.

The decision will go a long way in stopping inhuman police practices of stripping, feeling up breasts and genitals and subjecting transgender persons to intrusive body searches or medical examination to ascertain their gender. Discrimination in the areas of public employment, health care, education and access to services will be open to challenge and redress. Trans women (males who identify as women) may be able to seek protection under gender-specific laws for women. Affirmation of gender identity by the highest court in the land may also lead families to embrace gender non-conforming members.

See inset for the Supreme Court’s declaration and series of directions given to the central and state governments for action within six months. 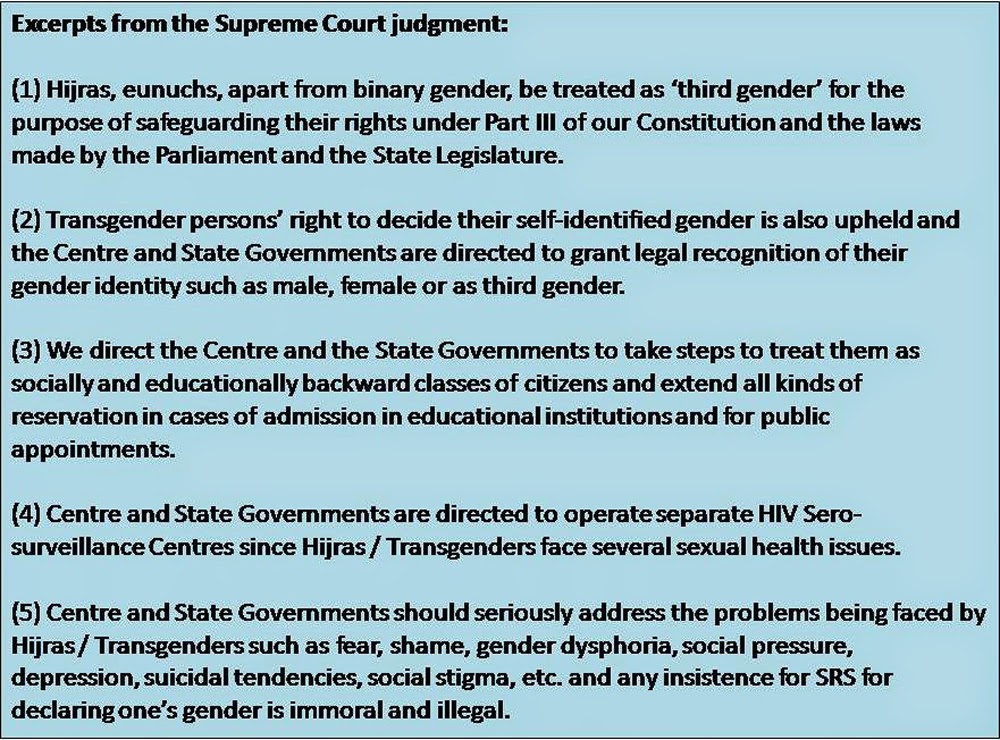 Quite expectedly, the Supreme Court’s verdict was greeted with joy and celebrations among the queer communities and their allies throughout India. After the Section 377 letdown, this development was a welcome relief. But along with a sense of elation was the worry about how the Supreme Court’s verdict would be implemented on the ground. Fortunately, some headway was already made in this regard. Based on advocacy carried out by queer activists in the last few years, in August 2013, the Ministry of Social Justice and Empowerment in collaboration with several civil society organizations and individual activists set up an Expert Committee to assess and document the health and development concerns of transgender communities. The committee submitted its report to the ministry in January 2014 with recommendations that could help actualize the Supreme Court's directions.

On the other side of the coin, critical voices were also heard and as the initial euphoria around the judgment dies down, they would only get stronger. Sample a few questions doing the rounds on Facebook and in queer circles: Who exactly would be in charge of implementing the verdict? Are more reservations really the answer? Didn’t the Supreme Court contradict itself through contrasting stands on Section 377 and the NALSA petition? In the first it criminalized queer people (including transgender persons) on grounds of their sexual preferences and in the second it stated that sexual orientation and gender identity couldn’t be grounds for any discrimination! Equally, why did the Supreme Court stop short of throwing open the gender option even further – what if some people did not identify as either man, woman or third gender?

A community event organized by several civil society organizations and individuals working on gender and sexuality in Kolkata on April 16, 2014 to protest gender-based violence half turned into a celebration of the Supreme Court verdict. The event, organized on a roadside in the Kadapara area near Swabhumi, witnessed a street play Ichhe Dana performed by members of Amitie’ Trust and speeches by a number of queer and women’s rights activists, lawyers and other supportive individuals. Among the speakers were Saswati Ghosh from Nari Nirjatan Pratirodh Mancha; lawyer Kaushik Gupta; Indrani Kar, a gender and sexuality activist; Minakshi Sanyal from Sappho for Equality; Suchandra Ganguly from Civilian Welfare Foundation; and Dr. Santosh Giri from Kolkata Rista.

Speaker after speaker emphasized the point to an audience of 60-70 people, including a number of passersby, that the Supreme Court verdict meant that transgender people in India now had a tool in their hands to demand equality and respect from the public at large and institutions engaged in health services, education or other developmental activities. In an evocative speech, Minakshi Sanyal said that it would take time, but eventually society would learn to shed its inhibitions and treat transgender persons as any other individual.

In the meantime, as a queer activist pointed out at the event, the media needs to get its act together and not confuse itself and the public on what transgender as a term means and the diversity that it encompasses of people whose gender does not match the usual definitions of man or woman.

Please visit this link for an explanation of what ‘transgender’ means and the health and development concerns of transgender people in India: http://socialjustice.nic.in/pdf/introduction.pdf (introduction to the report submitted by the Expert Committee to the Ministry of Social Justice and Empowerment)

Videos of short interviews with members of the audience at the community event in Kadapara, Kolkata mentioned above can be seen here: