On January 11, 2014, Dumdum Shabdomugdho Naatyakendra presented their play Rwituparno Ghosh at Gyan Manch in Central Kolkata, which had been premiered previously in the city in August 2013 (see theatre review 'Rwituparno Ghosh' in the September 2013 issue of Varta). The play, directed and scripted by Rakesh Ghosh, pays homage to the late filmmaker Rituparno Ghosh’s memory by reflecting on the quotidian forms of stigma, harassment and familial trouble faced by gender variant and transgender persons. 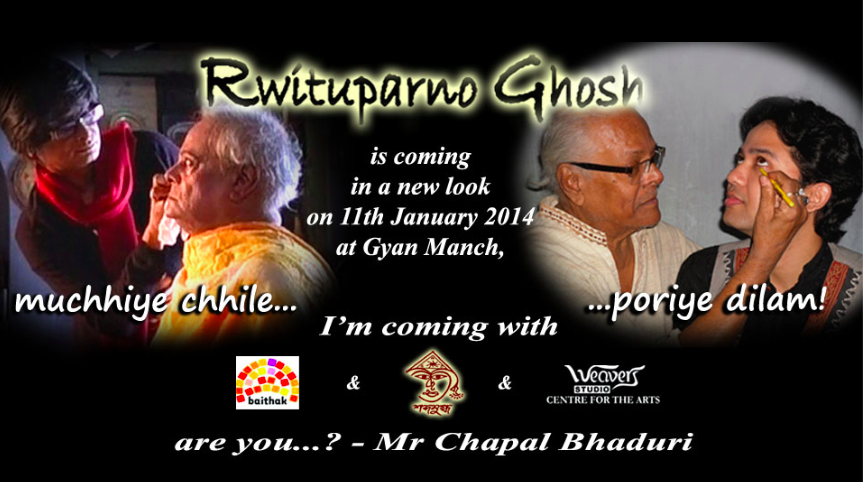 The play begins with an allusion to an incident at the Rabindra Sarobar lakes area of South Kolkata several years ago, when several Kothi / male-to-female transgender field workers of a community-based organization were assaulted and sexually harassed by local men. Apratim, the protagonist whose gender or sexual identity is never named but whose gender variance is visibly evident throughout the play, similarly faces ridicule and harassment in the lakes area, resulting in renewed conflicts with his family after his father forbids him to leave the house till the repercussions of the incident die down.

His mother criticizes and tries to change his sense of dressing – atypical and flamboyant for someone socially assigned as male – but he has the support of two significant female characters: Jhinukpishi, a progressive-minded aunt who supports his choices and tries to mediate between him and his mother, and Thammi, his grandmother, who lives independently in an old age home to avoid family conflicts and is also a vocal supporter, having noticed and accepted Apratim’s gender non-normativity from his childhood years.

A recurrent theme in the play is the loneliness faced by various characters at odds with the demands of a male-dominated, patriarchal society, including not only Apratim himself but also Jhinukpishi, Thammi, and even Apratim’s parents, whose apparent conservatism and censure of Apratim are shown as arising from their struggles with social expectations and demands.

The author got in touch with director Rakesh Ghosh and the actor who plays Apratim, Ranjan Bose, to talk about some of the issues touched upon by their play. The interview soon turned into an adda session (the typically Bengali style of meandering, leisurely conversation), and our conversation went beyond the play itself to encompass a variety of topics related to lesbian, gay, bisexual and transgender (queer) communities and politics. We did not always agree, but that did not impede the conversation in the least. While many gender non-conforming persons may prefer pronouns that differ from their socially assigned gender, I have followed the director’s use of male pronouns while speaking of Apratim, the protagonist. Some excerpts from our conversation:

On class difference and solidarity within queer communities

Aniruddha (to Rakesh): To begin with, I have a question about the allusion to the South Kolkata lakes incident in your play. Was there any specific reason for your choice of that particular incident?

Rakesh: Might be in my sub-conscious, but there was no specific reason in my conscious mind; I had actually forgotten about the incident when I began writing the play. I just needed a particular incident, so I evoked this one; but it is not intended to literally depict any true incident or have any similarity to a real life event, it is entirely fictionalized.

Aniruddha: Another issue that the allusion raised for me was this . . . not just at the South Kolkata lakes, there have been several such incidents in various cruising spots of the city. But those who have been usually affected in such incidents, their class profile and that of the character Apratim are different. People from the kind of family that Apratim belongs to, middle to upper middle class – the class from which Rituparno came – such people . . .

Ranjan: You mean they have not been victimized as much . . .

Aniruddha: At least not in the specific ways that people were in such incidents, from what I can tell based on conversations with survivors.

Ranjan: Let me say something in this context . . . just a few days ago, I was crossing the Nager Bazar intersection near Lake Town where I live, I passed a gentleman standing there. I was wearing a kurta and a shawl; the gentleman said aloud, see a Rituparno is going by! I called Rakesh and spoke back to the man, “Sir, do you want to say anything?” He was shaken and said no, he didn’t want to say anything. He must have been 45-50. Then I laughed and told Rakesh, see what you had written in your play, it's really happening!

Ranjan: If I had gone and may be slapped that gentleman that day, if I had been in a different mindset and had retaliated due to mental exertion . . . then maybe it could have escalated to a scuffle, and who can say that other people, seeing that I was attacking an aged gentleman, may not have harassed me even more? These words like homo, chhakka – we too have to hear them right from our school lives, and even now.

Aniruddha: Certainly, I myself have had to hear them . . .

Rakesh: Another thing . . . there is this strange phenomenon in our community, when we sit together and chat, suppose in the lakes area, or at one point Minto Park was very popular, or Nandan, then people from different classes, I mean socio-economic classes, congregate there, and in that space, the divisions between who is upper middle class, who is middle class, who is lower class – these differences disappear. Then the sexual identity of the people becomes more important, for which reason a guy from an upper middle class family can unhesitatingly talk with a guy from a socio-economically lower class family, and can sit and have tea with him. Maybe he can’t take the friend to his house, but in that space, they are all one. For then, their crisis is the same crisis. This I have seen with my own eyes. This is why Apratim can say, I am still financially stable, but imagine the situation of the guy in a village or suburban area who is not financially well off! He can realize this because he has seen such people around him . . . they are mocked even more!

On loneliness and female / feminine characters

Aniruddha: Coming to another question – so one common theme that I noticed in the play is that there are various female or feminine-identified characters, who for various reasons are alienated or marginalized from the social structure, or have been cast out of these structures to become alone . . .

Ranjan: Yes, it’s a story of people who are alone (eka manush).

Aniruddha: . . . and they are trying to live life independently. So this theme, of loneliness and independence, did you consciously choose it as a principal theme of the play? Or did it happen while scripting the play and its character development?

Rakesh: No, well, when anyone is writing a play, one has a certain image of the play in one’s mind in the beginning, but when they write the first one, another image starts working itself out, and then as one gradually progresses to the last page, to the last dialogue, the image one has at the end is often different from what one had in the beginning. So maybe this wasn’t consciously there in my mind, but whenever I have written anything, whether plays or short stories, in all of them my female characters have acquired a distinct significance.

Ranjan: No, here the question was that, is loneliness connected to femininity or feminine characters?

Rakesh: No, not just female or feminine characters . . . even the male characters are alone, for which I used that song for Apratim’s father as well – Eka Eka Jara Phere Shathihara . . . [this was a song used as a refrain in several parts of the play; it may be loosely translated as: “All those who drift alone, sans companion / What will happen for them?”].

Even the father seems despairing or alone at times, though he is the supposed strong heterosexual man.

Aniruddha: Yes . . . but let me put this differently; is there anything specific to the social situation of female or feminized characters, as demonstrated in several of Rituparno’s films as well, which you wanted to show in the play, and for which this theme became especially prominent in relation to these characters?

Rakesh: Yes certainly . . . they do have a special significance. The two most vital elements of the play are associated with two of the female characters. The first character, Jhinukpishi, very strongly psychologically supports Apratim, and she also is alone herself, though her economic status is entirely different [she appears to be a wealthier relative to Apratim’s family]. And the second character is the grandmother, who strongly supports Apratim emotionally, and her socio-economic status is also completely different from the others, as she has left the household and lives by herself in an old age home . . . Both these female characters are highly significant, similar to all of Rituparno’s films . . . even in the later phase, when Rituparno started focusing more on feminine males or feminine-identified persons, the women characters retain a distinct significance. That is why, consciously, I also placed a special emphasis on these characters.

In conclusion: Beyond the ‘community’

While we went on to speak about several other issues, one of the points that Rakesh and Ranjan stressed repeatedly was that they did not mean the play to only address only a specific gender or sexual identity or community, and wanted it to reach out to a wide range of people. I conclude with an excerpt:

Aniruddha: One difference I noticed between the pictures of the premiere show, and the version that was staged at Gyan Manch, was that the premiere showed Apratim sitting in front of a mirror with male and female signs attached on either side, as if to mark out Apratim’s ambiguous or intermediate gender position. But this was not there in the Gyan Manch version. Did you intentionally take it out?

Rakesh: Yes, I changed it intentionally. I realized that the moment I marked it out like that, the play became about a specific community. Maybe then you would not have asked the question about the women characters. They would have become less central to the play, and the complete focus would have been on Apratim’s orientation. The mirror did signify his orientation, but the other characters also have equal significance, and their sufferings, their journeys, have value for me . . . The community is certainly important, but in many other plays about the ‘community’, the exclusive focus in on the character’s sexual orientation. Then the audience becomes focused on homosexuality, on how these people have sex, how they live together; the suffering or tribulations of the character becomes less important, and curiosity becomes the bigger factor . . . people start wondering, what is beneath their pants or their sarees; they wonder, did Rituparno have a sex change surgery? Did he die because of that? And so on . . .

Ranjan: I mean, we too are human, just like the people around us – but people forget this.

I will leave the readers to gauge whether the play is successful in conveying this message – at the time of writing this article, the next performance is on April 20, 2014 at Sujata Sadan, Kolkata. I wish to thank Rakesh and Ranjan for their time, and hope that the play will inspire further dialogue on the complex intersections of gender, sexuality and class / caste that mark the dilemmas faced by many of us who may identify with Apratim or his family and friends; intersections that we could only briefly explore in the conversation above.

Aniruddha Dutta is an assistant professor in Gender Studies and Asian Studies at the University of Iowa, USA.
Posted by Varta at 00:28

Email ThisBlogThis!Share to TwitterShare to FacebookShare to Pinterest
Labels: Theatre