Margarita with a straw that is not straight

Cinemascope, May '15
By Niladri R. Chatterjee

One of the first things one realizes after even a casual acquaintance with feminism is that in a patriarchal society the male body is constantly projected as the only truly abled body. So, in a very basic sense patriarchy declares the female body as fundamentally disabled. Psycho-analysis tells us that this disability is a lack – the absence of the penis! So, by virtue of not having a penis, a woman is handicapped anyway. Hence, the benevolent patriarchal care and concern for the female body – those poor, weak things that are incapable of taking care of themselves. This handicap is, as it were, intensified if she has sight, hearing, speech, motor skills or any other impairment.

Isn’t it interesting that in Martin F. Norden’s The Cinema of Isolation: A History of Physical Disability in the Movies (1994), he shows that one of the earliest representations of disability is entitled Deaf Mute Girl Reciting ‘Star-Spangled Banner’ (1902)? In India, when I think of disability in cinema I think of blind mother of hero (Amar Akbar Anthony), wheel-chair-bound sister of hero (Sachaa Jhutha), blind heroine (Sunayana). To be fair, there are several representations of disabled men in Indian cinema, but one cannot help wondering if having a severely disabled woman in a film is often done to facilitate the working of the audience’s lachrymal ducts. The message seems clear. Woman = pity. Disabled woman = double pity.

Along comes Margarita with a Straw! Here is a disabled woman (Laila played by Kalki Koechlin) who initiates sexual contact with another disabled body, but without sentimentalising the episode. She masturbates. She responds to the sexual tactility of another woman. Has sex with a man with whom she is not in love. Had she not been wheel-chair-bound, we would have not had to search much for a word to describe her: “Slut!” But since she is disabled, we are conditioned to pity her. So, her unsentimental sexual promiscuity is put firmly beyond the pale of our moral opprobrium. 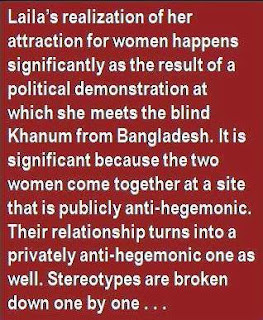 Laila’s realization of her attraction for women happens significantly as the result of a political demonstration at which she meets the blind Khanum from Bangladesh. It is significant because the two women come together at a site that is publicly anti-hegemonic. Their relationship turns into a privately anti-hegemonic one as well. Stereotypes are broken down one by one with a lightness of touch that reminds one of Gurinder Chadha’s Bend it Like Beckham. Here I am thinking specifically of the charming scene where Khanum plays cricket with the local boys of Laila’s neighbourhood. This is a double whammy: Not only is cricket regarded as a sport exclusively for boys and men, but it is also assumed that it is meant to be played by able-bodied persons. The scene of Khanum playing cricket questions both these assumptions. However, even Khanum turns out to have deep-seated patriarchal notions about relationships. Her inability to accept and understand Laila’s sexual intimacy with her attractive male friend proves that Khanum’s non-conformity stumbles at the threshold of a patriarchally valorised notion of sexual monogamy. Khanum also assumes, rather patriarchally, that sexual promiscuity automatically denotes emotional infidelity.

As I was watching the film I kept thinking of Firdaus Kanga’s novel Trying to Grow (1990). This is a story of Daryus Kotwal, a Parsee boy, living in Bombay surrounded by a doting mother, an affectionate father, a loving elder sister (in Margarita with a Straw Laila has a younger brother), and well-meaning but unconsciously ableist friends and relatives. Daryus is wheel-chair-bound. He falls in love with a woman. Then with a man. Then with the girlfriend of the man. Like in Margarita with a Straw, in the novel Daryus looks at himself in the mirror at the end of the narrative, and smiles in acceptance and validation. “I liked the way I looked” are the novel’s closing words. In the film Laila smiles at herself in the mirror and raises a toast to herself. She is drinking a margarita with a straw – a straw that is convoluted, twisted, fun! A straw that is not straight!

The intersectionality of disability and queerness that I so loved in Firdaus Kanga’s novel has now been portrayed by Shonali Bose and Nilesh Maniyar in cinema. Very few people know about the novel. The film will be better known. No matter. Let us see Margarita with a Straw as participating and contributing and complicating thoughtfully our essentialized notions of what it means to be able, and what it means to be sexual.

Please click here for a synopsis of Margarita with a Straw.