My Story, May '15
Pallav Bonerjee on his tryst with psychology, people and destiny – the fifth in a series of personal narratives


Around June last year, I got an opportunity to acquaint myself with a new concept that seems to be catching up quickly with many elderly in India today. It concerns and seems to address many pressing issues that the elderly face on a daily basis. This concept is known as ‘senior living’ and it has nothing whatsoever to do with the traditional old age homes.


India is home to 100 million elderly people today. The numbers are likely to increase threefold in the next three decades. Life expectancy has increased due to the advances in health services and diagnostic facilities. For a developing country like India, a rapid growth in the older population presents issues barely understood as yet. But these issues must be addressed if social and economic development is to proceed effectively. The change in the family structure (from joint to nuclear) and the advent of modern-day education, industrialization, digitization and individualistic philosophies have replaced traditional values and norms. The impact of these changes has acutely impinged on the elderly, coupled with their already declining physical strength and increasing dependency on their children. India needs a comprehensive, need-based, replicable and sustainable elder care model.

Unfortunately, we are far from embarking on that journey of change yet. Most cities and megacities in India today have become increasingly elderly-unfriendly, save the occasional park in the neighbourhood where one might find some silvers laughing in a group, early in the mornings. The pollution levels on the road make going out for a walk feel like a punishment. No footpaths are designed with carriageways facilitating comfortable walking space for someone with a walker or on a wheel chair. There are many roads without any footpaths at all and some, where the elevation of the footpath is unscientific and impossible to climb for the seniors on their own.

Most public utilities are ill-maintained and dens of infections for anyone with compromised immunity. There is a severe shortage of public sitting arrangements where one may relax for a while before continuing their journey. Public transport systems are supremely crowded and there is utter lawlessness in the process of boarding and de-boarding them. An elderly will never be able to push his or her way in or out of them. Driving on the city roads calls for displaying rare patience and judgement, along with tremendous reflex, which may also become progressively challenging as one ages. Many public buildings lack convenient parking facilities for the elderly, adequate lighting in corridors and passageways, ramps for wheel chairs or even elevators. In buildings where elevators are present, they may be out of service more frequently than they are in service. All of this leaves little choice for the elderly to venture out and they end up largely remaining indoors.

Even within their own homes, things do not seem to be working out for the Indian elderly population if we are to go by a recent 12-city study published by Helpage India in 2014 – State of the Elderly in India. A staggering 50% of the participants reported suffering abuse within the confines of their families. Increasing physical and economic dependency of the elderly on other family members has started revealing ugly cracks in familial relationships. The greying have started living like strangers in their own homes, where everyone else has become busier and has no time to spare for them. Their meals are restricted to their own rooms and important family decisions are largely taken in their absence. Common locomotor, visual, hearing and sleep-related deficits may compound the problems. Depression and anxiety among the elderly are also fairly common. Frailty and fatigue may create physical limitations and social withdrawal coupled with muscle and joint pains and aches. Risk of falls also increases with age. Many children now prefer electronic gadgets and video games to spending time with their ‘boring grandparents, who constantly talk about tradition, customs and values, and appear to live in history’.

All these make the elderly a pretty vulnerable population even in the company of their near and dear ones. Residing in their own home beyond a certain age has also unfortunately become somewhat of a punishment for them.

The concept of old-age homes is one that is still viewed with apprehensions and misgivings in Indian society. It has a strong negative social connotation and most people do not like to talk about it openly. For the elderly, it may mean being abandoned by their families, since they are of no use any more. This may result in a strong sense of loss and worthlessness. Moreover, many old age homes have few specialised services, are not well maintained and have residents who moved in since they had no other choice or were forced to leave their home by their children. Adapting to such a set-up takes up a lot of time. How the elderly view such institutionalised set-ups and whether they are able to eventually strike a compromise towards a natural acceptance of these facilities will always remain a debatable issue.

In contrast, there is a new concept of independent senior living spaces coming up in some places in India, which seems to address most of the current concerns of the elderly (at least those with a certain level of economic wherewithal): Comfortable and self-owned living accommodations with basic amenities, open spaces with tree-lined paths and gardens, common recreational facilities, library and intellectual activities, easy access to health services, a centralised office to pay all bills, departmental store for daily needs, a cafe-restaurant serving food low on sugar, spices and oil, and physical infrastructure for entertainment tailored to suit the specific needs of senior citizens. 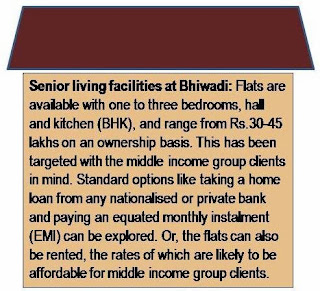 Such facilities are almost always situated out of the cities in suburban areas, because of the unavailability of adequate spaces within the city limits. I have had the opportunity to visit one such facility in Bhiwadi, Rajasthan over the last six months and it has been an eye-opener. Never in my life have I seen a large and diverse group of elderly, so happy and content with the place they are living in. Their excitement when they participate in various group activities that we (a group of mental health professionals) have been conducting there is infectious. There are people from many walks of life and different backgrounds. There are retired doctors, lawyers, engineers, businessmen, professors and civil servants. Some are alone while many live with their spouses. Most of their children are either settled in different cities or live abroad. Their children and grandchildren visit regularly but they are not dependent on them in any way.

Unlike many silvers who complain of loneliness even while living with their children in cities, these seniors seem to have found better things to do than feel sad or lonely about how their life has shaped eventually. They are more tolerant and empathetic to each others’ needs and provide the kind of support that becomes necessary as we age. They smile often and participate in all the programmes. We have had sessions on art, music, relaxation training, brain gym, talks on bone and spine health, nutrition, spirituality and physiotherapy. They come for these sessions in large numbers and create a complete pandemonium! But it’s fun. It’s a lot like a bunch of school children during recess. They freely share their experiences and openly connect with the others. They crack jokes and pull our legs occasionally. They have been able to infuse an idea of inclusivity and community feeling within the physical set-up of the senior living facility. They have monthly Tambola sessions and an annual fest where they compete with the residents of other senior living facilities in singing, dancing, one-act plays, cooking, table tennis, bridge, brisk walking, snooker and other such activities. Such events can give serious competition to the annual college festivals. Their exuberance can put our youth to shame!

From a life-span developmental viewpoint, healthy aging may be defined in terms of multiple dimensions – as absence of disease and good physical function, intact cognition and active engagement with life. However, this definition relies too heavily on the maintenance of typical functioning and ignores what may be qualitative shifts in late life in the valuation of life and its meaning. Standard definitions of successful aging fail to address what is gained in late life. Multiple studies have now confirmed that optimal aging is characterised by positive psychological characteristics, including happiness, intellectual curiosity, gratitude, spirituality and a strong sense of community.

Optimal aging allows one to maximise whatever health one has by having the good judgement to avoid agents that accelerate the aging process and promote those that retard it. The time that I have spent in the senior living facility at Bhiwadi has convinced me that this could be a major way forward for the elderly in India and it is only a matter of time before more people see value in this new concept and opt for similar spaces to grow old in. At Bhiwadi, senior living seems to already have stood the test of time and for the residents there, age seems to be just a number.

Rajib Das is a Kolkata-based artist. His work incorporates illustrations, comics and cartoons, each with its own spirit – fun, funky or serious. This is his passion and what he was meant to do in life.