On May 15, 2015, a group of 36 transgender people from Angul district of Odisha obtained their gender identity change affidavits with support from local lawyers. Thirty-four chose to identify as transgender and two as women. What is the context and significance of this event, and what does it mean for the future of transgender rights in India? Members of Solidarity and Action Against The HIV Infection in India (SAATHII), a national NGO that facilitated this process in Odisha, share their experiences.


In response to a 2012 petition filed by the National Legal Services Authority concerning transgender rights, the Honourable Supreme Court of India delivered the landmark NALSA judgement on April 15, 2014. The apex court recognized the need for granting full citizenship, regardless of gender assigned at birth, protecting rights and making provision of social entitlements for transgender individuals. Following the judgement, the central and state governments were directed by the apex court to implement its recommendations within six months, that is, by October 15, 2014. See inset below for excerpts on the key recommendations made by the Supreme Court. 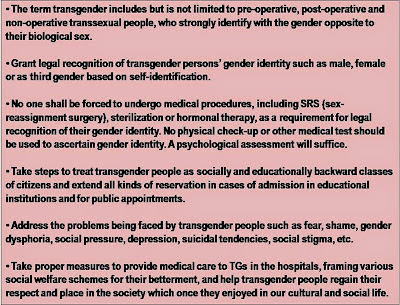 While the Supreme Court was deliberating on the NALSA petition, the Ministry of Social Justice and Empowerment (MSJE), Government of India, constituted an Expert Committee in October 2013 to make an in-depth study of the problems being faced by the transgender communities. The Expert Committee Report was published before the NALSA ruling and the Supreme Court ruling referenced the report asking for it to be implemented in light of the ruling within six months of the verdict.

It has been one year since the historical NALSA ruling. Save for two transgender welfare or development boards being established in Maharashtra and West Bengal and discussions underway for establishment of boards in Chhattisgarh and Bihar, most state governments are yet to come up with specific strategies for implementation of the apex court’s judgement, including rolling out central schemes. A welfare board existing in Tamil Nadu since 2008 will need to take a relook at its functioning in light of the Supreme Court judgement.

At the national level, apart from the inclusion of transgender people in the Indira Awaas Yojana and a directive by the University Grants Commission for the inclusion of transgender faculty members and students in educational institutions, the MSJE has sent letters to all state governments, proposing five schemes: Financial support of Rs.1,000 for parents of transgender children, monthly scholarship for students in classes VII to X, monthly scholarship to pursue higher studies in India, a scheme to train transgender people in developing their vocational skills, and monthly pension of Rs.1,000 to transgender people after the age of 40 till they reach 60. The contribution from the Centre is envisioned to be 75% and from the states 25%, except for the support to parents, which will be completely financed by the Centre.

SAATHII has been working in multiple states of India to promote access to health, justice and social security services for sexual and gender minority and other communities impacted by the HIV epidemic. Thrust areas have included legal literacy to communities, sensitization of health care providers, legal services authorities and other service providers on ensuring stigma-free services, and local and regional consultations to raise awareness about the unconstitutionality of Section 377, Indian Penal Code as it was before the Delhi High Court ruling in 2009 and since the Supreme Court verdict in 2013.

In May and June 2014, consultations were organized in Odisha and Manipur, respectively, involving legal service providers, civil society organizations and transgender community members to discuss the scope and recommendations of the judgement. In December 2014, public hearings were organized in Odisha and Manipur to highlight the cases of violence and harassment faced by gender and sexual minority community members. In Manipur, a signature campaign was initiated in Imphal by SAATHII and partner agency All Manipur Nupi Maanbi Association (AMaNA) to appeal to the government to set up a transgender welfare board in the state. In subsequent months, the signature campaign was carried out with the representatives of Manipur State Legal Services Authority, Manipur State AIDS Control Society, All Manipur Bar Association, All Manipur Ladies Bar Association, media houses and with members of community-based organizations across the state.

On the first anniversary of the NALSA judgement, in April 2015, interactive events with media representatives were organized in both Manipur and Odisha to discuss the scope and specific recommendations of the judgement.

Facilitating gender identity change affidavits has been the most prominent activity in terms of implementing the NALSA judgement. In December 2014, an orientation meeting in Manipur was organized with legal service providers, including representatives from the District Legal Services Authorities on the scope and recommendations of the judgement, and to establish linkages with legal service providers for facilitating gender identity change affidavits. A similar meeting was organized in Odisha in February this year. So far, SAATHII has facilitated around 70 gender identity change affidavits in Odisha, including those at the Angul event. Advocate Gowthaman Ranganathan of Alternative Law Forum, Bangalore, supported SAATHII in both events as an external resource person.

On other fronts, the implementation of the judgement is not as fast. In Odisha, we are working with SAKHA and other community-based organisations to engage with the state government and other stakeholders towards implementation of the judgement. But the only concrete trans-inclusive announcement from the Government of Odisha, thus far, has been the inclusion of transgender persons in the housing scheme Biju Pucca Ghar Yojana.

In Manipur, SAATHII and AMaNA have submitted a letter of request to the Chief Secretary, Government of Manipur, for facilitating the formation of a transgender welfare board. The letter was forwarded to the Principal Secretary, Social Welfare Department, and earlier this month, the Social Welfare Department reached out to SAATHII seeking support in planning a consultation with relevant government departments on NALSA implementation. 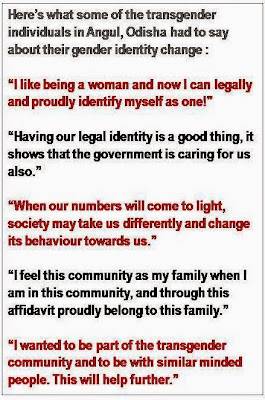 The Angul camp that enabled 36 individuals to have their gender identities changed is part of an attempt to get legal service providers to understand the scope of the NALSA judgement and support individuals to get their affidavits completed. It is not the complete solution – individuals will still need to get their newspaper announcements and gazette notifications done based on the affidavit. Advocacy is needed to facilitate these additional steps. However, it does help to get the process started for the individuals concerned, and, more generally, get the word out that the NALSA judgement is yet to be implemented and people want change.

What has been encouraging is the support received for our work on transgender rights and health from a number of donor agencies – American Jewish World Service, Department for International Development, UK (via the erstwhile Interact WorldWide), Elton John AIDS Foundation, European Union, Global Fund to Fight AIDS, Tuberculosis and Malaria (via India HIV/AIDS Alliance), World Health Organisation (WHO) and the United Nations Development Programme (UNDP).

Further work on the ground needed to implement the NALSA judgement includes dispelling pervasive misunderstanding and clarify to government functionaries that the term ‘transgender’ includes individuals assigned gender male or female at birth, and encompasses those who would like to identify within the gender binary and those who prefer a ‘third gender’ identification.

Another challenge lies in ensuring transgender individuals already in educational institutions and workplaces are able to have gender identity changes reflected in their records. Similarly, transgender individuals should also be able to access existing and new social security schemes and entitlements and encounter non-discriminatory environments in the process. There cannot be any two ways about this if they are to be part of the inclusive development as envisioned by the Supreme Court in the NALSA judgement.


Apart from the slow pace of its implementation, in part because of specific clarifications sought by the Government of India from the Supreme Court, the NALSA judgement has been critiqued for certain contradictions and lack of clarity in its text. A gap analysis of the judgement prepared by students of West Bengal National University of Juridical Sciences, Kolkata can be seen here – Editor.


Biswa Bhusan Pattanayak, Randhoni Lairikyengbam and L. Ramakrishnan are colleagues in the Bhubaneswar, Imphal and Chennai offices of SAATHII. The authors would like to thank Bandana Sahoo, Bibhuti Bhusan, Kedar Nath Patnaik, M. Sadananda Singh, Santa Khurai and Santosh Kumar Baghar for their involvement and support in the initiatives related to NALSA judgement implementation.
Posted by Varta at 03:12