Cause-way to the New Year


Soma: One of the key issues on which Khabar Lahariya reports is violence against women. You have also undertaken such reporting. What was your motivation behind it?

Kavita: Survivors of violence open up easily to us. They believe that we will understand the pathos and pain of their suffering more than any other journalist as we belong to the same region, caste and gender as well. Our strong will power to print the actual truth behind the stories, ignoring the glare of powerful political and community leaders helps us to take up and publish such burning issues of the regions we work in.
Read more »
Posted by Varta at 23:00 No comments:

I lost my maternal grandmother on the 12th of September this year. It was an ordinary day till the news of her demise came in. I was at office, consulting. The patient sitting in front of me was talking about his compulsive need to check for trace amounts of soap on his scalp after bathing every day, when a phone call from my father broke the news. I was a bit surprised to see his name flash on my phone screen. He usually doesn’t call me during office hours. I instinctively disconnected it with a message that I would get back later and refocussed on my patient. He was narrating about his checking ritual which now involved his wife’s assurance that his scalp was, in fact, perfectly soap-free, at which point he would be satisfied and leave home for office. The phone rang again.
Read more »
Posted by Varta at 23:00 1 comment:

For a breath of that Kolkata air

September 10, 2014, 2 pm, Kolkata airport. Far from my first trip to India, maybe the sixth, in a bit more than 10 years. And like each time, the childish joy of the first breath – the air is damp, rich, with a distinctive smell. And no, I’m not talking of the pollution! In Paris I can find hot snacks in packets and Alphonso mangoes directly imported, Tamil food on a banana leaf and sweet paan (betel). But to smell this air I have to travel about 7,000 kilometres, and I’m glad I have to. Some things have to be missed and looked forward to, without immediate and ‘any time’ satisfaction.
Read more »
Posted by Varta at 23:00 1 comment:

Clickhappy! Dec '14
Arunabha Hazra shoots some fun moments at the ‘Rainbow Carnival 2014’ at Rabindra Sadan, Kolkata on December 7, 2014 – the third consecutive year the carnival was organized

We are a gay couple and want to have a child through surrogacy? Is this possible? What are the legal implications?

The first issue that needs to be addressed here is that Indian law, unfortunately, does not yet recognize the concept of a ‘gay couple’. Marriage can take place only between a male and a female. Two men can choose to identify as a gay couple but the law only understands and recognizes a heterosexual married couple.
Read more »
Posted by Varta at 23:00 No comments: 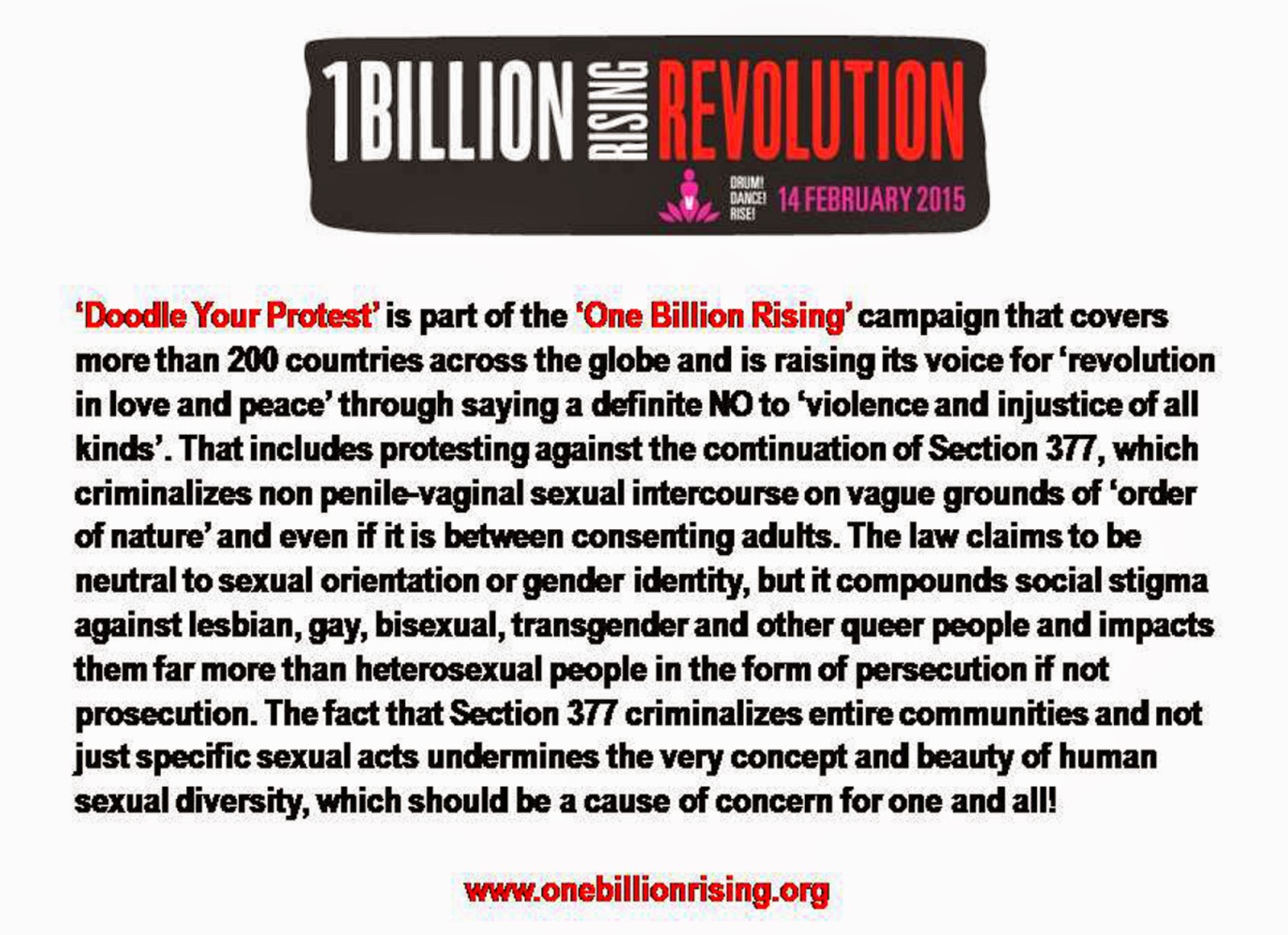 We are obsessed with Section 377, Indian Penal Code, aren’t we? Come December 11, and we couldn’t leave any stone unturned to push away this inglorious creation from our lives! As you can see, even doodling, that delightful and distracted art form has also been drawn in. We invited doodles to register protest on the first anniversary of the Supreme Court verdict on Section 377, and we got much more . . . thank you, all contributors . . . and we are looking for more at vartablog@gmail.com!