Soma: One of the key issues on which Khabar Lahariya reports is violence against women. You have also undertaken such reporting. What was your motivation behind it?

Kavita: Survivors of violence open up easily to us. They believe that we will understand the pathos and pain of their suffering more than any other journalist as we belong to the same region, caste and gender as well. Our strong will power to print the actual truth behind the stories, ignoring the glare of powerful political and community leaders helps us to take up and publish such burning issues of the regions we work in.


Soma: What aspects of violence do you report on? Is rape included? Do you think government and police take rapes beyond metro cities seriously?

Kavita: We report more on the emotional violence against women. These cases of violence do not get reported as there is no evidence of such violence and thus it is difficult to prove. Rape is very much included in our reporting on violence. The regions covered by Khabar Lahariya are famous for recurrent cases of rape. We put in our best efforts to report such cases neutrally.

I think if there is political colour, the police do not take up the cases of violence against women seriously. If the perpetrator belongs to an upper class (like the Yadavs), the police refuse to file an FIR and are also reluctant to take steps against the perpetrators. 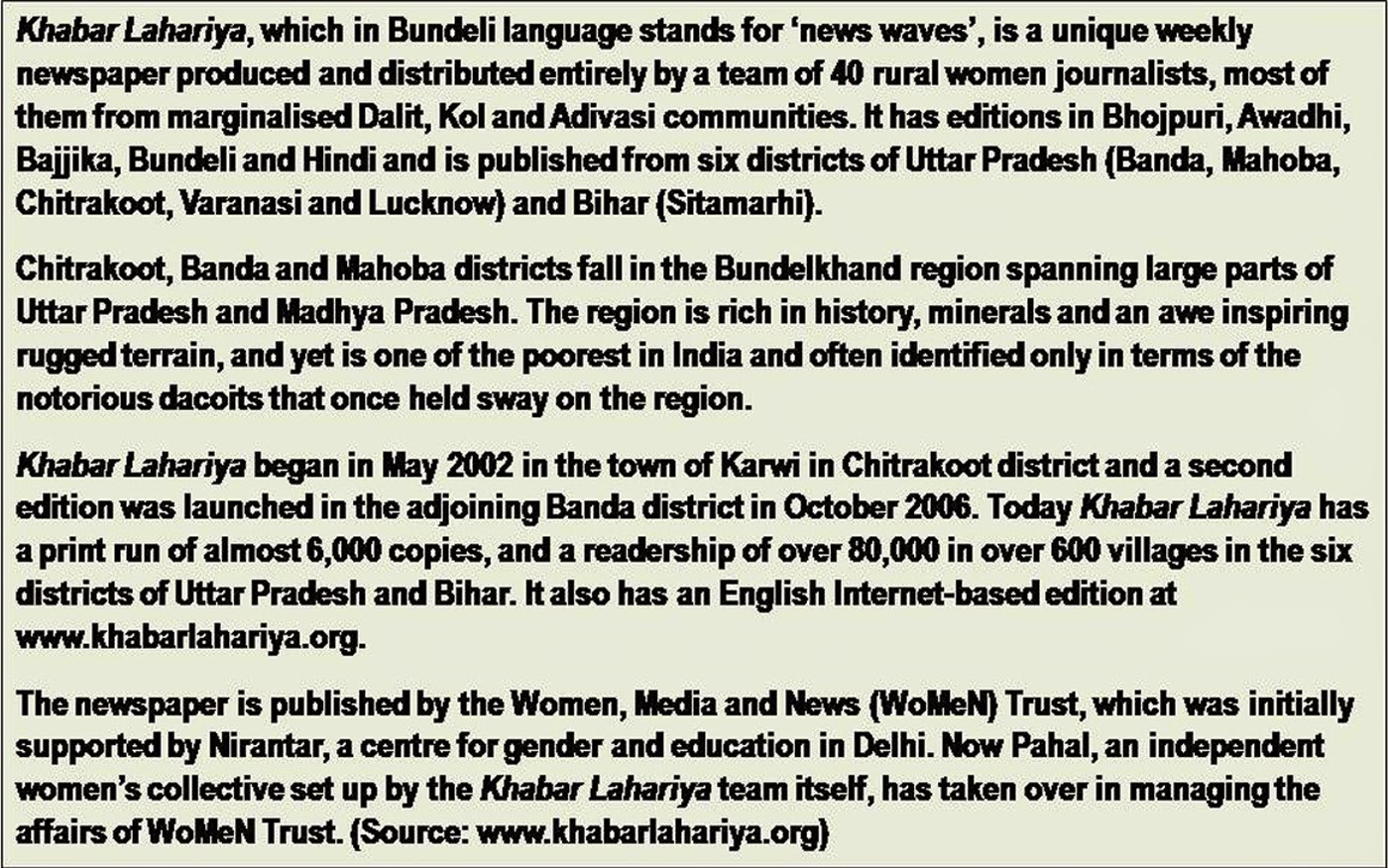 Soma: What challenges do you face in collecting the stories? Who poses these challenges?

Kavita: In the male dominated society of villages, women can't be seen showing power or domination. In towns and cities one does not face such problems. In villages we have to contend with very oppressive forces. But despite all the difficulties, we are determined to pursue the profession and remove every iota of stigma that still remains in the minds of the people.

Kavita: No, I am not scared of anything as the work and responsibility of Khabar Lahariya has become an integral part of my life. And I do not become emotional as that can impede my work. But I am empathetic towards the survivors of violence, my style of reporting becomes empathetic, I look into the cases empathetically.

I counsel the survivors so that they can take necessary steps to protest against the violence. I refer them to the relevant professionals or government departments so that they can advocate for their own rights. I follow up regularly on the matter and publish follow-up reports. But I don't engage myself directly in the process of seeking justice for the survivors.

Soma: What purpose does Khabar Lahariya serve in your opinion – a media watchdog body or an intervening agent?

Kavita: Khabar Lahariya has steadily gained a reputation for acting as a watchdog against greed and corruption in the region, not as an intervening agent.

Soma: The districts of Uttar Pradesh and Bihar where Khabar Lahariya is growing steadily have literacy rates lower than the national average. How does Khabar Lahariya attract readers and gain credibility or the trust of the readers?

Kavita: Currently Khabar Lahariya is published from five districts of Uttar Pradesh (Banda, Mahoba, Chitrakoot, Varanasi, and Lucknow) and one district in Bihar (Sitamarhi). Khabar Lahariya consists of eight pages where four pages are published in the local language and another four pages in Hindi. So it is easy for the local readers with even a minimum level of literacy to read at least four pages of the newspaper. Also they request the school going children of the family to read out the reports to them. If requests come from any enthusiastic villager to read out the newspaper during our news collection visits, we also spend some time with them and help them to understand the crux of the news published.

The journey has been difficult for us. But now we have been able to gain a substantial amount of credibility among the readers and community leaders of these regions. Previously they questioned our ability and credibility, did not allow us to enter their localities for collecting news, and most surprisingly they could not believe that women could be reporters! But now with our hard work, sincerity, patience and passion, we have created our own image which they cannot ignore and are bound to accept us and take us seriously.

Soma: Can you share some examples where Khabar Lahariya reporting has brought positive changes in the lives of people?

Kavita: Several reports published in Khabar Lahariya on injustice have enabled people to act and demand redress. The health centres in Banda district were not distributing iron tablets among the women patients. When Khabar Lahariya published a report on the issue, the health centres started distributing the tablets immediately. Then again, there was no teacher in the Banda Primary School, and we published a report on the matter. Soon teachers were appointed in the school and now it has become the most popular primary school in the locality. Also Khabar Lahariya reporting has helped improve the infrastructural facilities in several villages.

Soma: How has your work as a journalist with Khabar Lahariya affected you personally?

Kavita: It has made me a much stronger and confident woman!

The eight-page newspaper provides a mix of news, information and entertainment specifically for its rural readers most of whom have low levels of literacy. The publication covers current political news, stories on the functioning of Gram Panchayats, bureaucracy, schools and hospitals in the region, local scandals, ranging from petty corruption to instances of wife-beating and atrocities on women and marginalised communities. 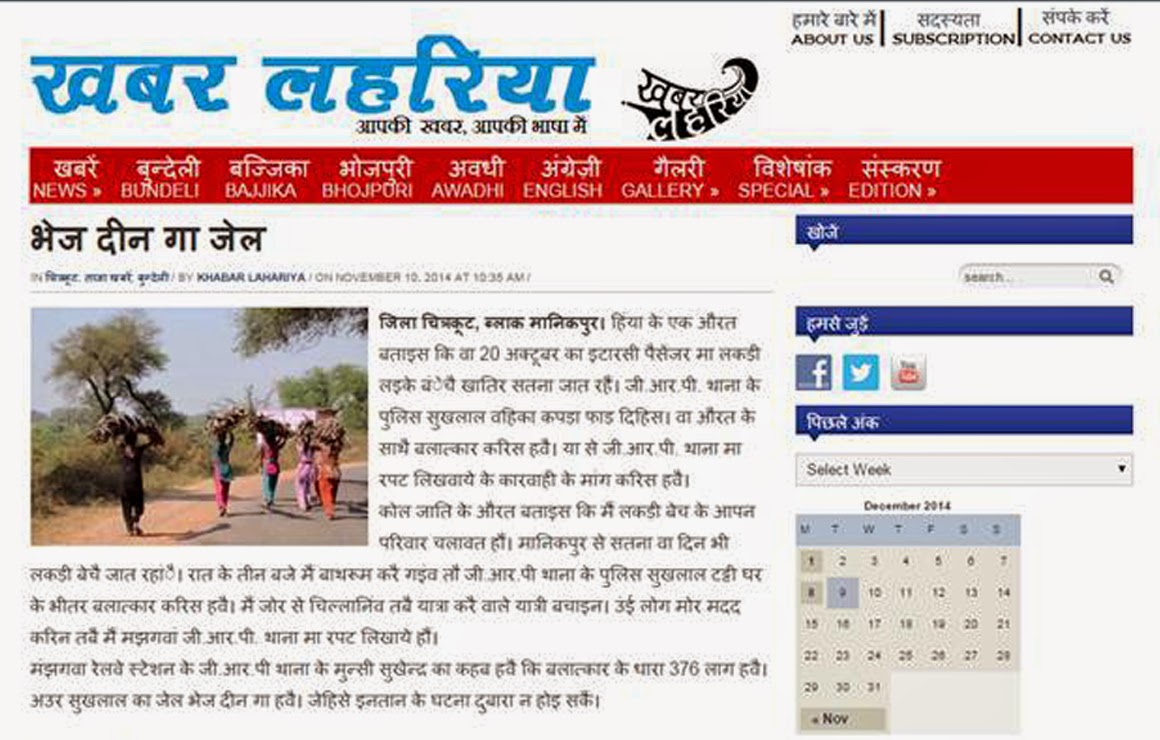 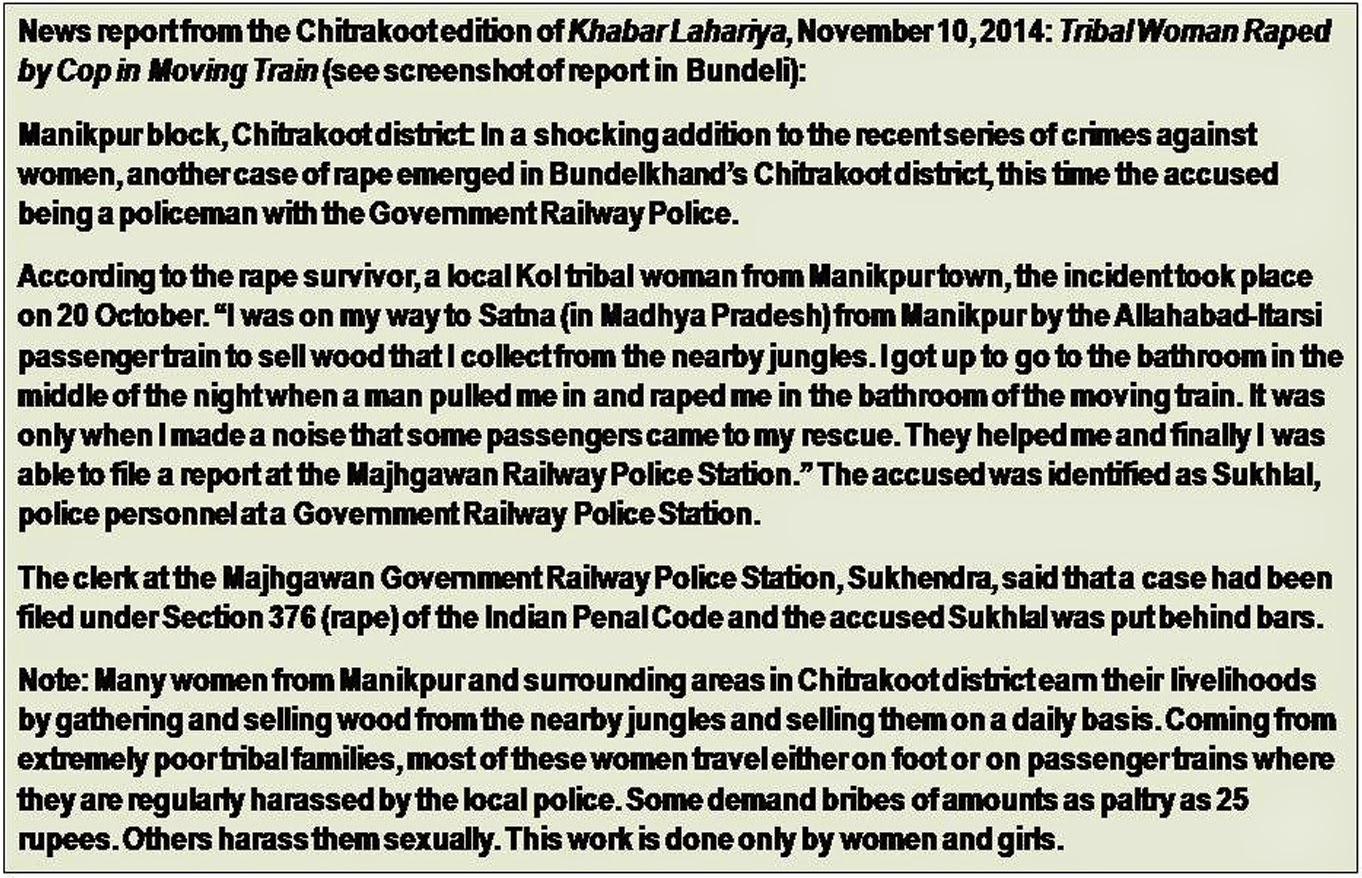 The newspaper is sold by the reporters and other agents of the newspaper for Rs.2 each. In the morning, the reporters can be seen stalking the markets, village fairs, offices and even train compartments, with their bundles. Copies are also available at small shops and tea stalls in the block headquarters and in remote villages and hamlets.

The Khabar Lahariya team agreed partially to carry local advertisements in the newspaper after much debate. But they want to avoid any casteist and sexist advertisements, having been survivors of caste and gender oppression themselves. They also do not accept any advertisement promoting or selling firearms.

Khabar Lahariya contributes to women’s empowerment in more ways than one, not the least of which is enabling its own team members struggle against traditional stereotypes and control within their homes. It has given them a new identity. Their exposure of scams and scandals has made them a force to reckon with. In the words of Editor Meera Jato: "The criminals and mafia dislike yet fear us . . . the pen in our hands is more potent than their aslah (weapons) . . . in the end, it's we who win!” (Source: www.khabarlahariya.org)

If you too want the victory of the pen over the aslah, visit www.khabarlahariya.org and support their endeavour!