What do the curative petitions filed against the Supreme Court’s verdict on Section 377 say?
Anonymous, Kolkata

Several parties have filed curative petitions in this matter, among them, Naz Foundation (India) Trust, the original petitioner in the constitutional challenge to Section 377. According to a statement issued by Lawyers Collective – HIV/AIDS Unit, counsel to Naz Foundation (India) Trust, its curative petition points out that the most glaring error in the Supreme Court verdict on Section 377 was the failure of the court to notice the effect of the amendment in the offence of rape in Section 375, IPC on Section 377.

After the Criminal Law (Amendment) Act 2013, Section 375 prohibits both penile-vaginal and penile-non vaginal sexual acts between man and woman, without consent. By implication, such sexual acts between man and woman, which are consensual, are not criminalized anymore. Therefore, consensual penile-non vaginal acts in a heterosexual context are out of the ambit of Section 377, otherwise the amendment in Section 375 becomes meaningless.

Currently, in effect, Section 377 only criminalizes all forms of penetrative sex, that is, penile-anal sex and penile-oral sex, between man and man, which makes it ex facie discriminatory against homosexual men and transgender persons and thus violative of Article 14 of the Constitution.

The Criminal Law (Amendment) Act 2013 came into force in February 2013, after the conclusion of final arguments on Section 377 in the Supreme Court in March 2012, but way before the pronouncement of the judgment on Section 377 in December 2013. The court ought to have noticed the import of the statutory amendments and their effect on Section 377 and ruled accordingly.

The petition further notes the gross miscarriage of justice that has resulted from the Supreme Court decision in misreading the legislative intention in not amending Section 377 during the criminal law amendments in early 2013. At the time of debating changes to the rape law, Section 377 was raised in the Lok Sabha, but the House refrained from discussing it because the matter was sub-judice. This legislative deference to judicial process cannot be seen as an endorsement of the existing Section 377, and by doing so the Supreme Court committed a manifest error of law.

In light of the significant import of the issues raised in its curative petition, Naz Foundation (India) Trust has sought an oral hearing of the petition as well as an interim stay on the Supreme Court’s Section 377 decision. 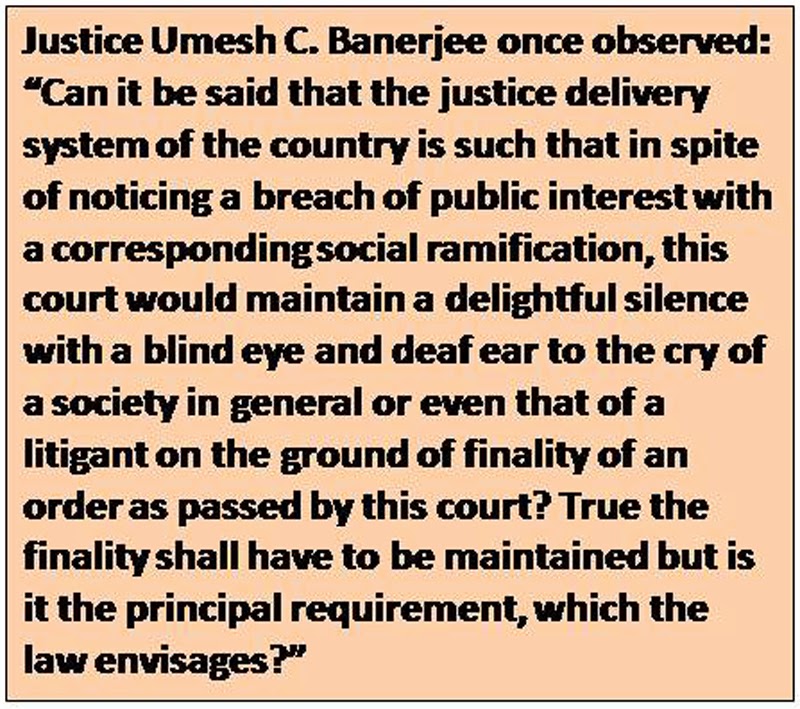 What is the legal opinion in the matter of curative petitions?
Anonymous

The entire world will have its eyes on the Supreme Court of India when it considers the curative petitions against its own verdict on Section 377. It is to be seen whether the apex court rises to the occasion and makes this a rare case for upholding the human rights of the citizens of India. It is not the law but the justice that should prevail.

One of the honourable judges of the apex court observed: "Justice is a virtue which transcends all barriers. Neither the rules of procedure nor technicalities of law can stand in its way. The order of the court should not be prejudicial to anyone. Rule of stare decisis [to stand by that which is decided] is adhered for consistency but it is not as inflexible in administrative law as in public law. Even the law bends before justice." – Justice Syed Shah Mohammed Quadri quoting Justice R. M. Sahai.

A curative petition is considered to be the last refuge in the legal process of the country. It is very important to give finality to a decision of the highest court of the land. Whether the judgment is to your liking or not, the law has to be settled. Thus there are very few instances where a curative petition has been entertained to overturn an earlier judgment.

However, it will not be out of context to quote Justice Umesh C. Banerjee in the case of Rupa Ashok Hurra wherein he observed: “Can it be said that the justice delivery system of the country is such that in spite of noticing a breach of public interest with a corresponding social ramification, this court would maintain a delightful silence with a blind eye and deaf ear to the cry of a society in general or even that of a litigant on the ground of finality of an order as passed by this court? True the finality shall have to be maintained but is it the principal requirement, which the law envisages?

“Roscoe Pound stated that flexibility is the greatest virtue of law and thus its applicability should also be flexible rather than a rigid insistence on a strict format. Justice of the situation shall have to be considered with a fair perception of such a concept rather than with a blinking light, attention ought to be focussed on a larger social perspective since law is meant for the society and if flexibility is its virtue, which law enjoys, its corresponding primary duty thus would be to change the legal horizon and perspective with the appropriate socio-economic change. The law must follow the society rather than abandon the society and carry on it strict track without any deviation or without being hindered of the social changes and thus resultantly face a social catastrophe.”

We hope the apex court will not let go this opportunity to prevent such a ‘social catastrophe’.

Kaushik Gupta is a lawyer by profession, a photographer by passion, and happy to answer your queries on legal matters around gender and sexuality. Write in your queries to vartablog@gmail.com, and they will be answered with due respect to confidentiality.
Posted by Varta at 00:25