People, Apr '15
An ‘agent of change’ seems to sum up late Kusum Gupta rather well. One year on since she left behind family, friends and colleagues forever, Pawan Dhall flips through papers of an unpublished interview with her from 2002

In 2002, the Marwar magazine was looking to profile Marwari women who were questioning the status quo around gender inequity in their communities through their work in different spheres. A journalist friend with the magazine requested me to interview Kusum Gupta for the unconventional and brave stand she had taken around women, children and queer rights, even if this was in circles away from media attention. It turned out to be an interview that lasted several memorable hours. I could never get around to writing it out and submitting it for publication. But April 7, 2015, her first death anniversary seemed like a good occasion to retrieve some of her comments from the interview notes, as close to verbatim as possible. The interview papers also included a short note Kusum Gupta wrote to describe her work and what she felt were her “achievements”. Her thoughts and beliefs may have changed over the years since the interview, but what she said or wrote in 2002, political incorrectness and all, still has relevance.


On her personal goal and principles

My goal is not to go against my family and husband but to work in harmony for the best – not to succumb to exploitation and discrimination, not to grow with fear.

My current work is my life. I will keep doing it till I can, and continue to draw inspiration from my children.

I learnt driving a car at the age of 16. I wanted to be in control of my destiny. 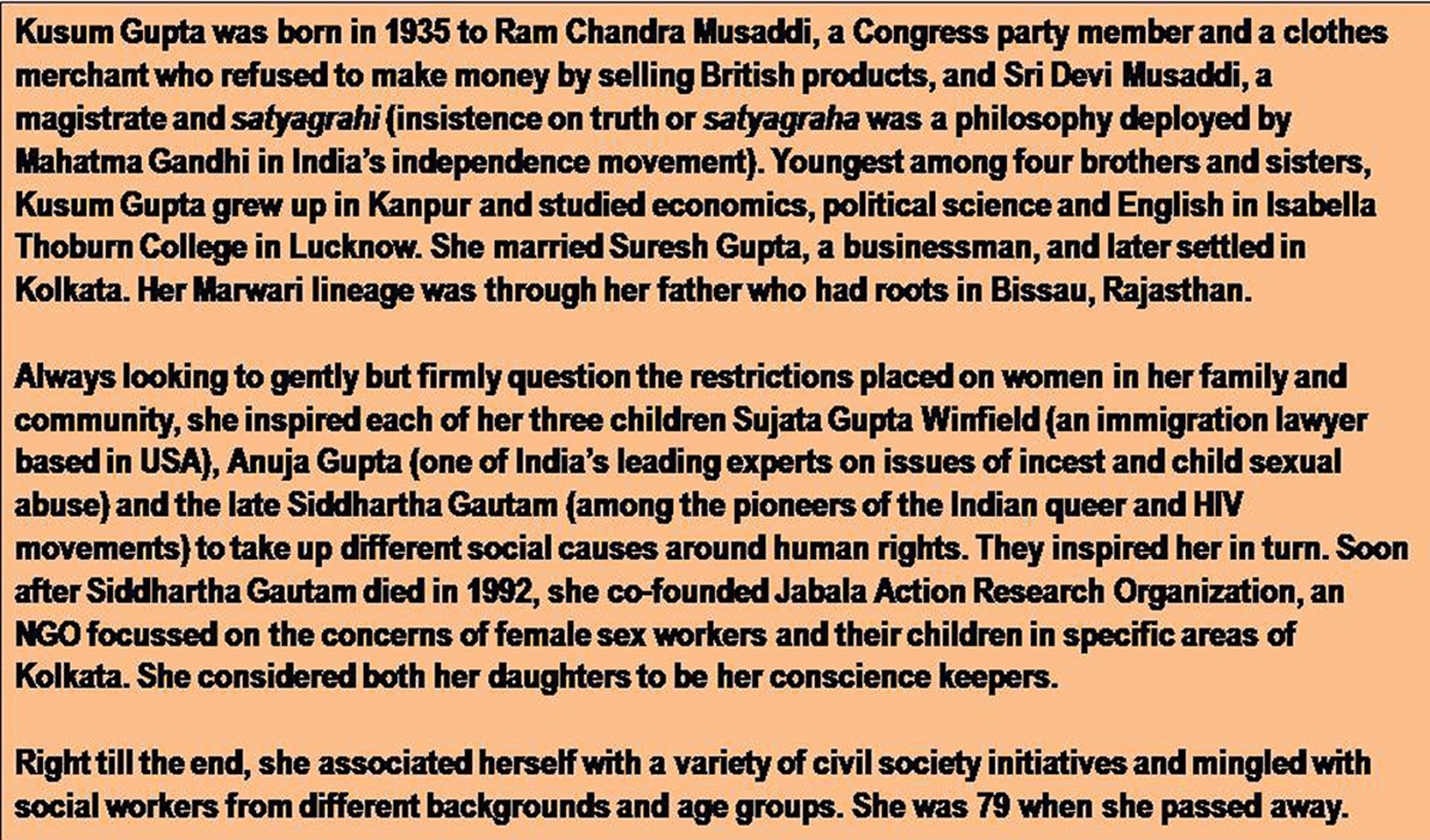 On the status of women in society

With all education, challenges and emancipation that have come with modernization, women are still the victim of religious superstitions, worshipping and fasting for the men who have made them inferior.

The status of women has gone from bad to worse. True, there were fewer career options for women earlier. But one adjusted. Today, the concept of adjustment is gone. There are higher levels of formal education, but the mindset remains the same. Marriage is still the goal for women . . . Even in the educational sphere the avenues are still stereotyped – interior decoration, cooking, home-based work . . . Crucial decision making is still in men’s hands. We need to put our foot down.

There is over-protection of girls, which makes them dependent. Even if they study or work, it has to be in tune with the ultimate goal of marriage . . . marriage may be important for companionship and a better life, but it can’t be the sole goal.

Women’s expectations are higher now, but remain unfulfilled. Expectations from women, including working women, have not gone down!

On bringing about change in society

In this male dominated society if we want to bring any change – we have to first fight against the definition of [our] own image, role and status which is so ingrained in us, which is making a woman [an] enemy of another woman. From the very childhood [we should] teach our children – boys especially – basic etiquette and respect for the opposite sex. We can stop the male child from turning into an oppressor and a female child into a victim.

How can things change unless men stop getting pampered and mollycoddled?

As a social worker, I owe my identity to my children . . . to endless discussions with Sujata, Anuja and Siddhartha . . . Siddhartha talked about sex workers as good people, while in my upbringing even being touched by an unrelated man meant a fall from grace . . . On a trip to New York where Siddhartha was undergoing a medical treatment, he arranged for me to attend a talk on HIV/AIDS, which was an emerging issue then. I knew he would not send me to a ‘bad place’. All the same, I felt confused and upset about it. But I knew he wanted me to learn something, and this possibly was the start to my journey as a social worker.

In March 1992, soon after Siddhartha passed away, I decided to travel to Manipur with two HIV activists. People at home were shocked: “You’ll go to Manipur with two men!” Fortunately, there were Siddhartha’s friends in Manipur known to my family. This was a trip Siddhartha was looking forward to, and that pushed me even more to go for it. The learning from this trip was the turning point for me.

Anuja and Siddhartha’s friends also influenced me, always urging me to get involved in social causes. In August 1992, I participated in a demonstration with them against police harassment of gay men in Delhi . . . I even started believing in live-in relationships listening to their friends. But then many of them got married, probably because of immense parental and social pressure.

I tried to love my children equally, but did I? It was Anuja, in her own assertive manner, who helped me take a critical look at my unconscious biases towards Siddhartha and realize where I was going wrong.

On her work in NGO Jabala, which she co-founded in 1992

It’s hard work. To bring change is a slow process. I get disillusioned at times, whether I am making any dent in the lives of the women or the children or not? Perhaps not! But definitely I am leaving ‘impressions’ which are lasting. When I go to my work area and hear “Didi, Didi aa gayi” from the children and women, I feel I have achieved something . . . Even if I save [a] few girls [from] falling in their mothers’ profession, having late marriages – going for studies, and boys not learning bad habits and going for careers, I’ll feel I have achieved something.

My work with Jabala evoked a strong reaction at home. I even lied to my parents-in-law initially about the children coming home for dance lessons. I said they were slum dwellers, hiding the fact that they were children of sex workers. But my husband knew and he was very upset about my work. Values differ even now. Yet I’ve always shared my work with him and that has given me strength. His silent support has always been there . . . Eventually everyone in the family came to know. My mother-in-law’s reaction was not negative. My family members have changed and now support my work and even attend Jabala’s annual functions.

On the debate on legalization of sex work

On the impact of Jabala’s work

In Jabala, we focus on education, physical and emotional health, livelihood and saving schemes for sex workers and their children. We involve them in theatre, music, dance and mime, including call shows. Generating community awareness and preventing child sexual abuse and trafficking are also part of our work. Over the years because of the exposure they have received, the children have developed confidence; they are independent thinkers, unafraid to express their views. They talk to visitors, they question them. They have developed maturity, creativity and talents.

On the way forward

It’s a long walk to achieve freedom, equality and the respect and acknowledgement of [our] work – they are not given, [we] have to earn them, wrest them, create them!