Pawan: What is 'Kashish' all about?

Sridhar: 'Kashish' primarily is meant to mainstream lesbian, gay, bisexual and transgender (queer) visibility through cinema. For the Indian queer audiences, the festival offers a mirror to similar lives, struggles and victories in other parts of the world. For the ‘mainstream’ audiences (who comprise about 30%), it is an opportunity to form a better understanding of queer persons, their lives, hopes and aspirations.

Pawan: How is it different from other queer film festivals in India?

Sridhar: 'Kashish', for the first time, has taken an Indian queer film festival to an international scale and also placed it in a mainstream theatre. It is very empowering for a gay or lesbian person to sit in a multiplex theatre and watch queer films on the big screen with their partner, friend, family or colleagues. It helps reduce the stigma and discrimination one feels as a queer person and allows one to be in a comfortable queer-friendly space without labels.

Nitin: What is your view on the quality of films that get submitted to Indian queer film festivals – 'Kashish' in particular? Is it difficult finding a decent bouquet of films?

Sridhar: 'Kashish' receives close to 300 submissions and an informed preview team works with the programming team to finally select around 130 films. 'Kashish' definitely has become an important queer film festival in the international queer film festival space and being selected at 'Kashish' is a matter of pride for filmmakers around the world. Having said that, it is still difficult at times to get the big queer features because of the screening fee requested by distributors. With very limited resources, we sometimes aren’t able to bring them to our festival.

However, 'Kashish’s' programming is on par with any international queer film festival around the world and our festival programme guide is closely looked at by other festivals. We have also helped programme a bunch of Indian queer-themed films at other queer film festivals in USA, China, Sweden, Italy, The Netherlands, Germany, Canada, Romania, and Japan. This makes for a fabulous opportunity for fledgling Indian queer shorts to be seen by an international audience.

Nitin: In your own estimate, how does 'Kashish' compare with queer festivals globally in terms of the quality of submissions? Is it among the top 20 as a recent poll says? Or is that an exaggeration?

Sridhar: The recent poll by Moviemaker Magazine was about the top 20 coolest queer film festivals, and 'Kashish' certainly is cool! Within four years, it has grown to become the biggest queer film festival in South Asia, with the largest number of films and the highest audience turnover. The four successful editions held so far have screened around 110-132 films from 25-40 countries every year and attracted a footfall of around 7,500. This I think is remarkable coming from a country like India, where till recently homosexuality was criminalized and queer communities were largely underground. 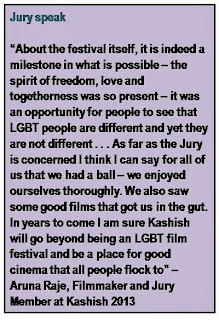 Nitin: Is the quality of Indian submissions enhancing or impacting the overall selection of films at 'Kashish'? Do you aspire to take 'Kashish' on a par with any other queer or 'mainstream' film festival?

Sridhar: The quantity of Indian films being submitted has gone up, but the quality of Indian submissions is definitely a matter of concern. At 'Kashish', over the past four years, the number of film submissions from India has increased. In the first year, in 2010, we received just about 25 Indian films, while in 2013 we received around 50 Indian films. However, we only could programme 18 of them, since a majority of the films did not measure up to even the basic standards of good content or filmmaking. There seem to be too many filmmakers who are making films with no technical expertise or even a cinematic eye for storytelling and aesthetics. Having said that, some of the Indian queer films that we programmed told important and pertinent stories, right from the heart. That too is definitely a big plus for the film to be appreciated by the audience.

Sridhar: 'Kashish' is now seen not only as one of the most important queer pride events in India, but also an important cultural event in Mumbai’s cultural calendar. In fact, many of our audiences in a post-festival survey mentioned that they felt the festival was one of the best organized – in terms of both administration and technical quality. To quote an audience member in the survey: “Films started by and large on time and 'Kashish' managed to stick to the schedule, something which even 'MAMI', 'IFFI' and 'Third Eye' fail to do.”

Then again, this year, for the first time, all the funds were raised from corporate bodies and through crowd funding, unlike earlier years where there was support from UN agencies and the social development sector. Several Indian queer companies, organizations and initiatives supported the festival with financial contributions or advertisements in the festival catalogue. The 'Kashish 2013' crowd funding through Wishberry was one of the most successful Wishberry crowd funding campaigns.

Nitin: What is your view of the quality of audiences at queer film festivals in India, specifically 'Kashish'?

Sridhar: Audience demand for good quality cinema has increased dramatically over the years. While in the first two years of 'Kashish' they wanted to see happy romantic comedies with sexy buff guys, over the past two years, the audience mainly flock for good quality, hard hitting international dramatic features or documentaries. There is a definite shift in appreciation of qualitative content and aesthetics.

The post-festival survey showed that 88% of the audience were between 18-45 years and predominantly male, about 80%. About 48% were salaried, 33% self-employed and 20% students. We definitely are looking forward to increasing the lesbian and transgender participation in the coming years.

Nitin: Do you consider the upcoming Supreme Court verdict on Section 377 Indian Penal Code as a risk factor for 'Kashish'? The verdict could go either way, so what happens if the Supreme Court upholds the appeals against the Delhi High Court judgement of 2009 that decriminalised same-sex sexual relations?

Sridhar: 'Kashish' is here to stay for good. No law change will impact it because we have the backing of filmmakers and the audience.

Pawan: What about future plans?

Sridhar: 'Kashish' is considering workshops and hands-on training programmes, as well as queer cinema appreciation courses to assist young filmmakers. 'Kashish' is also looking forward to expand its reach beyond the five days of the festival by holding film screenings at colleges and universities throughout the year. It recently supported screenings by the fledgling Queer Campus Hyderabad by curating a package of films for them. The festival has facilitated screening of Indian queer films at 'Tasveer Seattle South Asian Film Festival'. It will also be holding special screenings during the 'Mumbai Queer Pride Month' in January 2014.

The festival also has to develop a comprehensive financial model for it to be long sustaining. This can only be achieved through greater involvement by the audience as well as a stronger backing by sponsors. We are looking at increased participation of corporate bodies and brands in supporting such a mainstream queer initiative. Also it would be wonderful if the state government could support the event, as most queer film festivals across the world are supported by the local government or cultural body.

Nitin Karani is a Mumbai based queer activist and writer.