I have a transgender friend. After the Supreme Court judgment, she wants to change all her identity documents right from the birth certificate onwards and step out as a whole new person. Please advise how she can proceed.

As per the usual practice followed in the state of West Bengal, through a lawyer, one can get an affidavit affirmed in an appropriate format before a First Class Magistrate; wherever applicable, stating the desired name and gender and other particulars. Once the affidavit has been duly affirmed, the fact of the said change should be published in two local newspapers. Thereafter, the local office of the Department of Publication of the Ministry of Urban Development, Government of India has to be approached for getting the information of change of name and gender published in the official gazette of the state concerned. 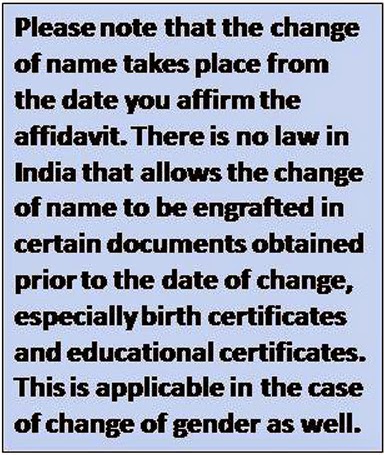 Next, each of the concerned government departments has to be approached with a copy of the said affidavit, the newspaper publication of the change and the gazette notification for the purpose of incorporating the change of name and gender in the passport, voter identity card, PAN card, Aadhaar card and ration card.

Please note that the change of name takes place from the date you affirm the affidavit. There is no law in India that allows the change of name to be engrafted in certain documents obtained prior to the date of change, especially birth certificates and educational certificates. This is applicable in the case of change of gender as well. Therefore, under the existing law, it may not be possible to change the birth and school / college certificates obtained prior to the change of name and gender unless the government, by enacting a law, specifically allows the same. The affidavit will act as a bridge between the earlier and new identities for all legal purposes.

In the absence of a clear central law, the procedures and challenges in name and gender change vary from state to state.

Kaushik Gupta is a lawyer by profession, a photographer by passion, and happy to answer your queries on legal matters around gender and sexuality. Write in your queries to vartablog@gmail.com, and they will be answered with due respect to confidentiality.
Posted by Varta at 23:00

Email ThisBlogThis!Share to TwitterShare to FacebookShare to Pinterest
Labels: Advice - Rights and Laws