Was it celebration or protest?

It was the perfect way to end a New Year’s Eve, with a loud, resounding and cheering “No” to patriarchy! This was the theme that resonated throughout an event titled ‘Call against Patriarchy – Defying Edition 377!’ held on a cold 31st night around a small open-air stage outside the Academy of Fine Arts in Kolkata.  Despite the chill, no one felt the slightest bit frosty. There was fire in our hearts and it burnt brighter as one performance after another furthered our resolve to keep fighting the injustices of a world that militates against anyone who is ‘not male, not heterosexual, not able-bodied, not normative in terms of class, caste, race or religion’.

I have never before seen such a lively public display of pride, and not just lesbian, gay, bisexual, transgender (LGBT) or queer pride. There were gender-queer fashion shows, plays, recitation, a freeze mob, stand-up comedy, songs, dance and more. In fact, I believe this event was even more successful than the last ‘Kolkata Rainbow Pride Walk’ because it had an inclusive approach. The organisers did a great job of bringing together diverse voices to talk about and challenge different facets of patriarchy, including Section 377 of the Indian Penal Code. These voices were not just of LGBT and other human rights activists, but also of artists, writers, academics and impromptu speakers from among an audience of 150-200 New Year revellers and people attending a theatre fest in the neighbourhood. When people spoke about LGBT concerns, they did so in solidarity with the concerns of women, children, youth, the disabled, people living with HIV, and even those experiencing unwanted religious conversions – patriarchy impacts all of us in many inter-connected ways.

The event was organised jointly by a number of individuals and agencies like Civilian Welfare Foundation, Kolkata Rainbow Pride Festival and Amitie’ Trust among others. It began with a short talk on patriarchy and Section 377 by Samrat Sengupta, Assistant Professor and English Head of the Department, Kharagpur College and Doctoral Fellow, Centre for Studies in Social Sciences, Kolkata. Since it was the beginning of the event the crowd of onlookers did not initially understand what was going on. So the hosts Tanushree and Deshapriya Mahapatra decided to engage the crowd to help them understand the theme of the event and to understand what Section 377 was all about. While most of the onlookers could not describe what the law was about, one of them was able to describe it quite elaborately and its social and legal implications. Perhaps a sign that more people are now aware about issues like Section 377. 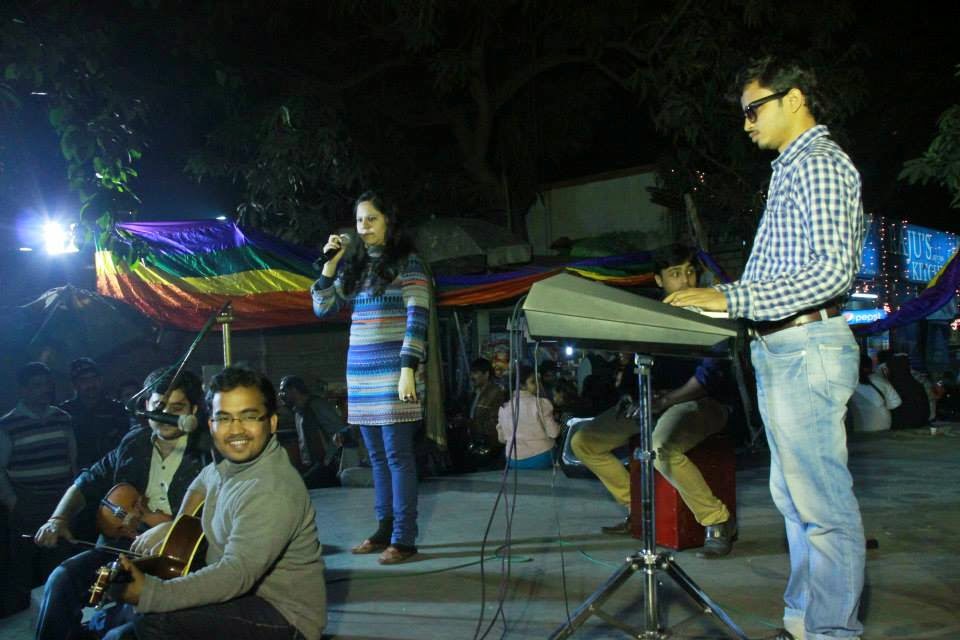 This was followed by a performance by X-Raf, an experimental raga and folk music fusion band. Though it was a relatively new band, it was certainly not lacking in performance. Their first song was one of their own compositions – on the need to keep up the fight against injustice. Personally I wanted to hear more of the violin, but it was overshadowed by the vocals, guitar, drums and the synthesizer. It was very good though, as was their next number, a Baul song, which overcame the limitations of the sound system and managed to bring in a larger audience. The crowd at this point was full of people who couldn’t decide whether or not to stay. Some of them stayed for some time but when they found that people were talking about Section 377, some of them crinkled their nose and left. Others decided to stay put and figure it out further. Inspiring speeches by Shampa Sengupta of Sruti Disability Rights Centre, Soma Roy Karmakar of RAHI, which works on child sexual abuse and incest issues, and Kshitij Mondal of South 24 Parganas Network of People Living with HIV/AIDS added to the audience’s interest levels.

Next, it was time for a stand-up comedy act in English by Trisha Roy, who introduced herself as the best female stand-up comedian in Kolkata, followed by how she was the only female stand-up comedian in the city! She then explained how initially it was two of them, but then one of them decided to join politics and now worked in Nabanna, the seat of the West Bengal government. Her act focussed on how “in today’s world men are not needed”. Tongue heavily in cheek, she drove home the point that sexual abuse was heavily gendered, one of the reasons “why men suck”! All in all, a funny act indeed, though a bit lost on the crowd that seemed lukewarm to the jokes in English.

‘Gender politics of clothes’ was next on the agenda – a fashion show to highlight the fact that clothes need not be related to biological sex or to gender. The show was a hit. Men (well, presumably men) in ‘women’s’ clothing, women (again presumably) in ‘men’s clothing’ – all boundaries, conventions and norms of clothing were shattered. I could clearly see some of the men ogling at the guys in some beautiful dresses. The show began with a trans woman cat-walking the stage, which doubled as the ramp. Then there were three women in dark biker gang clothes with cool shades. This was followed by three men in gowns and dresses oozing sexuality. Makes you realize that gender and sexuality are so fluid and ever-changing! Their poses displayed how confident all the models were, none of whom were professionals. The crowd cheered and whistled and had a blast. The two designers Archan and Prasenjit received a lot of praise, even as the crowd swelled and the celebration of diversity seemed to have begun in right earnest!

Now that the atmosphere was charged, it was time for a street play by Amitie’ Trust. The timing could not have been better. It was actually a series of short one-act plays depicting the impact of Section 377 on people’s lives – the college girl who is bullied and hit by her classmates because she is lesbian; the married man who has a love affair with another man – when his wife finds out she abuses him and leaves home – he is shattered, not because his wife has done anything wrong, but because his marriage with her in the first place was forced by rigid social norms that took a toll on both their lives; the story of a health worker who educates queer people about safer sex, but gets beaten up because of being ‘immoral’; the trans woman who does not get a job because her ‘ambiguous looks’ may put off prospective customers; the trans man who has to endure ‘correctional rape’ by his brothers who want ‘her’ to be more feminine.

In the end, Hijra activist Aparna Banerjee, who provided the voice-over for the plays, called all the actors on stage and informed that each of the skits was based on a real story. She explained how Section 377 affected everyone, and proclaimed that “this law may try to wear us down, weaken us and destroy us, but we will keep resisting, no matter what”. It was inspiring – my eyes were seriously stinging at this point – how awesome if every queer person could speak out loud and proud like Aparna Banerjee!

At this point, I saw a small boy and his father come through the crowd up front, probably because they thought it was a dance performance happening. However, just then a speaker on stage roared in anger at the injustice towards queer people and said how unfair Section 377 was. At this, the father’s face darkened and he immediately pulled his son away. It’s funny, but not funny, how people always decide what is appropriate or not for their children without once considering their children’s choices! 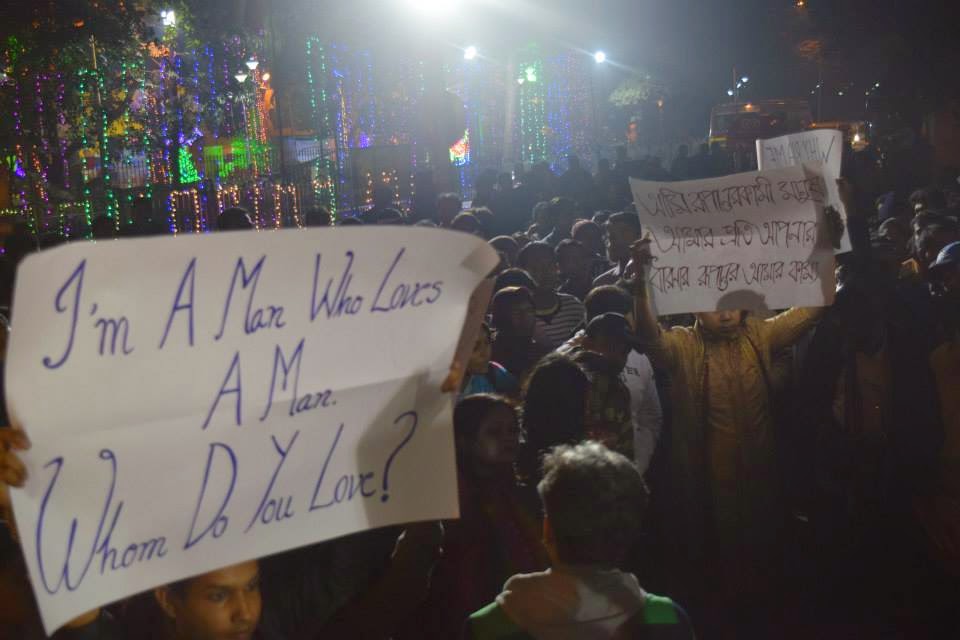 Next up was a freeze mob performance by Kolkata Rainbow Pride Festival volunteers, right amid the crowd of onlookers. While one volunteer lay down posing as a dead body covered in a white shroud, another sat next to the body with a placard that said “Humanity is dead!” Half a dozen other volunteers moved around the body to music playing in the background, holding up placards with messages like “Sex is not dirty, your mind is” and “I’m a man who loves a man. Whom do you love?” They froze where they were as soon as the music stopped. People from the audience were invited to place ‘paper wreaths’ on the dead body; each wreath had a human quality written on it – ‘friendship’, ‘tolerance’, ‘love’, ‘freedom’ and so on. The moderator of the freeze mob then summed up the performance, asking the audience to introspect: “What is each one of us doing to keep humanity alive?” A commendable effort that was quite appreciated by the audience, but people away from the centre of the crowd missed out on the performance. 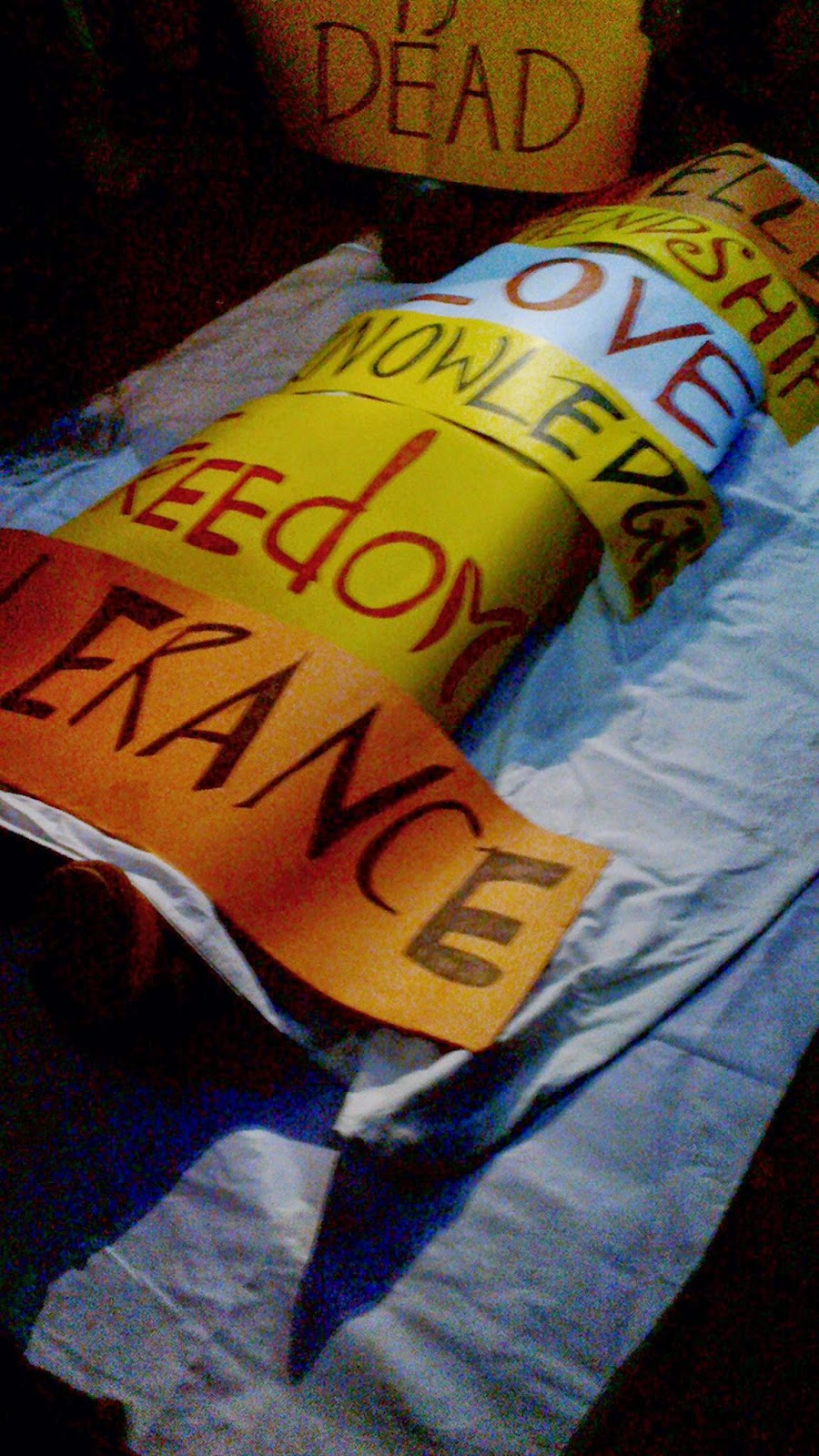 The sombre mood brought about by the freeze mob was transformed by Kathak-inspired dance numbers by Abhishek Gurung and Vishal Bhardwaj. The music and the moves clearly conveyed queer pride and Abhishek Gurung’s footwork in particular was nimble. X-Raf, which has three visually impaired members, continued the mood uplift with more songs and a guitar instrumental number. It was good fun as they made the audience join in. It was heartening to find a music band with so much soul as they decided to combine their love for music with a social cause.

Another fashion show and more dance and musical items were followed by recitations. Prosenjit Pal, Senior Research Fellow, S. N. Pradhan Centre for Neurosciences, University of Calcutta presented a poem titled Abahelar Prem Noy (Not Futile Love), which he had written in 2009. In the poem, a mother happens to see her favourite son in a passionate embrace with another boy, his best friend. The son is punished and locked away in his room by his mother. He remains isolated even within his family for years to come. All his siblings get married and leave home. He grows sadder and sadder, till one day his mother, now all alone herself, has a change of heart. She breaks down all shackles and hugs her son again. The reunion brings tears to their eyes. The mother then declares to the world that her son’s love is not futile and that he deserves as much respect and love as all her children. The poem had a distinctive feel of a grandmother’s tale seen in Sukumar Ray and Rabindranath Tagore’s writings.

Towards the end was a sruti natak (audio play), which was about two estranged lovers, a politician and a trans woman, meeting after a long time. As the politician’s star rose, he became involved in his work and neglected the trans woman, who had to go through a lot of hardship and pain. She makes the politician realize that he had abandoned her. The politician admits to his fault. The two then decide to raise their voice together against all forms of social injustice.

Section 377 may have been the rallying point for the event, but it also connects to other forms of social oppression that stigmatize anyone who is non-normative (depending on what the context is). Therein lies the need for different social movements to take up an integrated and inclusive approach to activism around different human rights concerns – an approach based on greater mutual understanding, strategic collaboration and solidarity. This message in itself made for a great start to the New Year!

Drake Fort is an engineering student trying to pack in Pokemon training, gadgets, activism, love for nature, parkour and more in 24 hours!