A thought for Ma and Baba


“When I first came out to my family, it wasn’t the easiest of journeys – as is generally the case with many lesbian, gay, bisexual and transgender people. However, the basic difference that I found in my journey with so many others’ is that my mother, to whom I came out initially, never felt as if her dreams had been thwarted,” says Debjyoti Ghosh, a young advocate from Kolkata currently studying human rights in Budapest, Hungary. 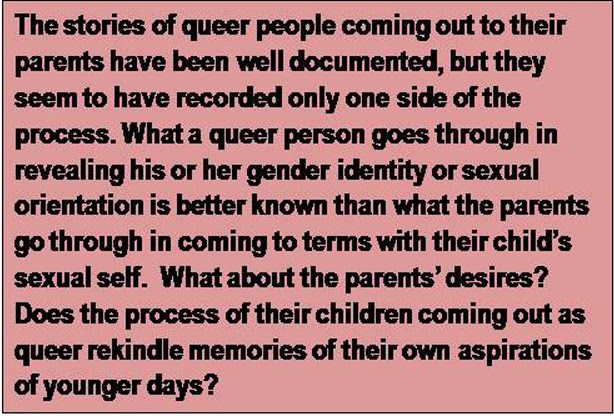 Debjyoti Ghosh’s story is one among a growing number of queer coming out stories in India that don’t necessarily end in a disaster. Indian parents accepting their queer children’s gender identity or sexual orientation may still be a rarity, but is no longer unheard of. Family acceptance of queer children is beginning to enter the realm of social research as well, and on the legal front, in 2009, the Delhi High Court read down Section 377 of the Indian Penal Code, which effectively decriminalized queer people. Though the Supreme Court reinstated the law in 2013, the Delhi High Court ruling led to many individuals across India coming out to their parents about their desires and dreams – in many cases with happy and not-so-sad results.

These stories have been well documented, but they seem to have recorded only one side of the coming out process. What a queer person goes through in revealing his or her gender identity or sexual orientation is better known than what the parents go through in coming to terms with their child’s sexual self. Queer sons and daughters trying to come out may feel anxiety, confusion, fear, even terror; but what do their parents feel? Utter disbelief, shock, anger, disgust, disappointment and concern for their child’s future are likely to be common responses. Some parents may also become violent, while in rare cases, they may feel good that their children confided in them something crucial about their lives. But even this information is not entirely unknown and is again in relation to the children’s desires. What about the parents’ desires? Does the process of their children coming out as queer rekindle memories of their own aspirations of younger days?

Kunal Roy (name changed), 27, researching Parkinson’s disease at the University of Calcutta, shares his conversation with his parents: “Baba wanted to be an engineer and wanted to go for higher studies, but given the family environment he could not muster courage to speak up about his ambitions. Mother, too, wanted to study a lot. But as part of a family of nine siblings, she could not bring herself to tell her father that she wanted to choose studies over marriage. They feel happy and proud that at least I have made it to a high level in academics.

“They still want me to get married and have a child. This wish probably arises from their concern for my future. I think my coming out as gay must have triggered memories of their own years of self-denial and they do not want me to be unhappy. They also saw an earlier relationship I had with a man end on a sad note. All along they have sublimated their desires so that their children (my sisters and I) could have the best in life. I hope to be able to do something for their future security.” 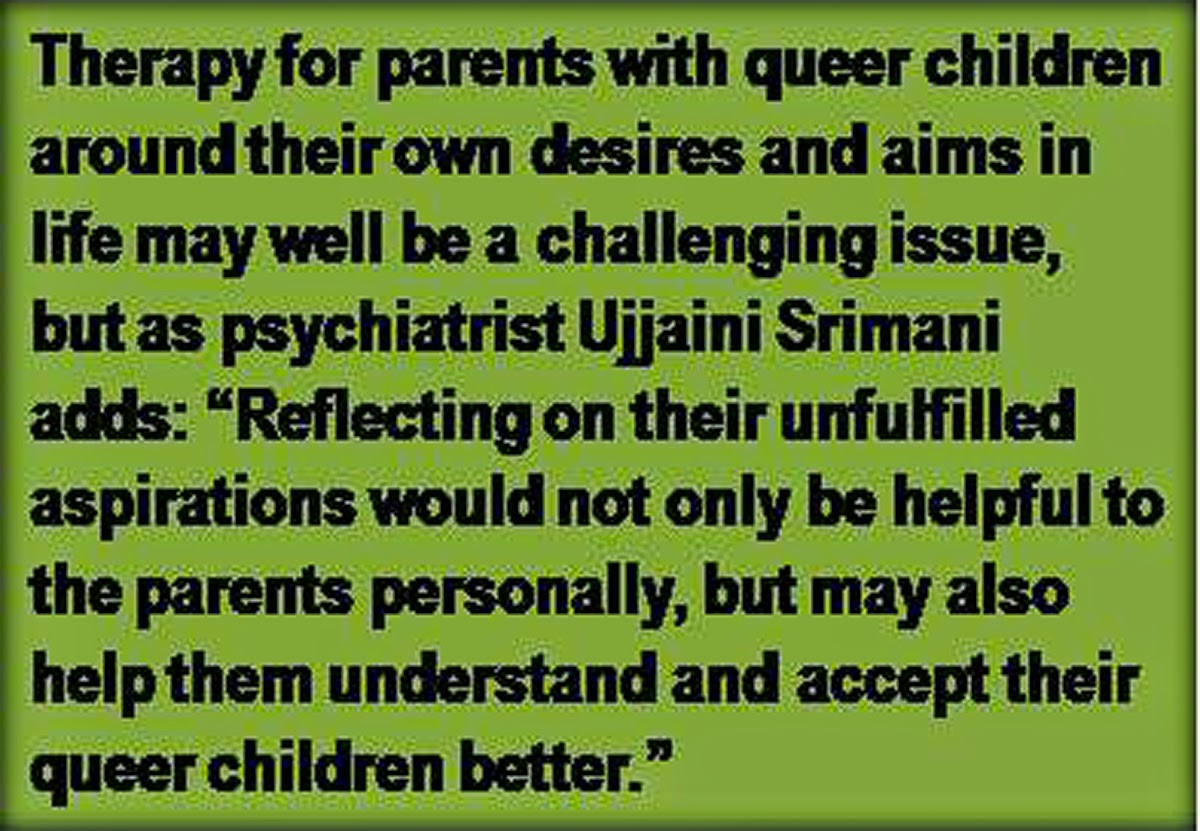 Debjyoti Ghosh narrates a similar situation in his e-mail from Budapest: “My parents, surprisingly for most Indian parents, never felt it necessary for their children to live out their aspirations. My mother’s immediate reaction was to reach out with unconditional love and then partially give in to all her fears for me – fear for my safety, fear for my security, fear for my future, fear of my being alone, without anyone, given the legal situation in India. However, she settled down and actually became actively involved in my life, reaching out to many of my friends and often giving them the safe space they needed.

“With my father, his support wavered, but in his own, stoic way, he probably supported me more than he ever got to know. He, too, never tried to thrust his ideas of family, religion (despite being deeply religious), or his relatively conservative social values – in fact, if anything, he has been very happy with my choice in men – as long as they know their whiskeys and cook well!”

Suchandra Das, a budding photographer based in Kolkata, had a mixed experience coming out to her parents: “I always had interest in members of the same gender but never really felt the urge to talk to my parents about it. Maybe I always knew that they were not going to accept it. But when I fell in love with my partner, I decided to tell my parents because I thought it was only fair for them to know what beautiful emotions their daughter was experiencing.

“So I told my dad one night after dinner. He patiently heard what I had to say. He was cold and resilient. My mother was more emotional. She was angry and not ready to accept. My parents felt what I had shared with them was abnormal and against nature, and that society would never approve of it. They could not imagine me in love with another woman.” Yet, Suchandra Das’ parents seem to be having a change of heart: “With the passage of time, their attitude has softened. My mom stays in touch with me and I too visit their place at times.”

Across the country, Nitin Karani, a middle aged Mumbai-based writer on queer issues, came out to his parents around 15 years ago. Speaking on the phone, his mother Kanchan Karani shares what transpired: “Nitin deliberately left around some magazines for me to discover. I was confused and shocked, but then conversations with Nitin and his cousins and friends helped a lot. This process lasted over two years. I was disappointed he would not get married. But slowly my thoughts changed. I stopped caring what the family members said. Marriage is not so important, my child’s happiness is. Nitin is in a relationship with another man, and I have no worries. I have given many interviews to the media and feel that parents should accept their children as they are.”

When asked whether her son’s coming out reminded her about any personal aspirations, Kanchan Karani said there were no such thoughts. But what enables some parents to be as accepting as she was, or what might be the reasons that Suchandra Das’ parents are also trying to understand her better? Could it be personal life-changing experiences and influences somewhere, sometime in the past?

Ujjaini Srimani, Kolkata-based psychiatrist, often sees parents bringing in their queer children to ‘change’ or ‘cure’ them. She agrees that in all such cases the focus is almost entirely on the children. “There is little scope, given our resources and set-up, to probe further into the early life experiences of the parents themselves. But I think a deeper therapeutic engagement with them may reveal the wishes they may have had in the past, as well as the compromises they had to make to adapt to society. These need not even be in relation to their sexuality, but anything that was unconventional in their times and which they had to give up on.”

Therapy for parents with queer children around their own desires and aims in life may well be a challenging issue, but as Ujjaini Srimani adds: “Reflecting on their unfulfilled aspirations would not only be helpful to the parents personally, but may also help them understand and accept their queer children better.” 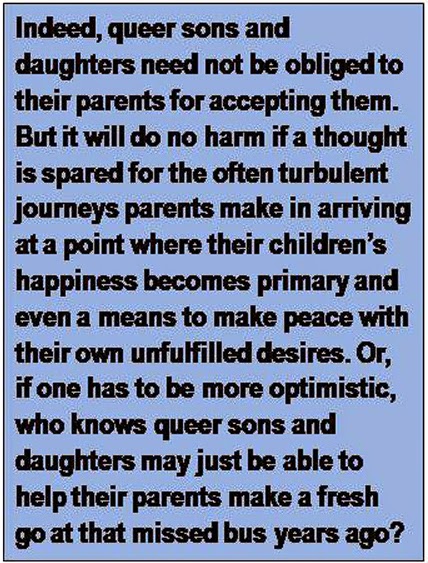 A study conducted by the Family Planning Association of India, Mumbai in 2011 (Family Acceptance among Self-identified Men Who Have Sex with Men and Transgender People in India) also calls for support forums for parents whose children come out to them as queer. Such forums should ideally be lead by parents who have accepted their children as queer and who can act as peers in helping other parents overcome their anxieties and fears in relation to their children’s gender identity or sexual orientation. But such forums will have to make the extra effort to also see if the parents need support in reflecting on their own past and deal with any residual pain around the compromises they had to make.

Queer people like Kunal Roy seem to feel this need intrinsically when they talk about their parent’s security. Debjyoti Ghosh is even more evocative: “Truth be told, in the beginning, it was I who felt that I had thwarted their aspirations – the things I had heard in my childhood – them being at my wedding – a straight one – my wife playing the piano every evening – Sunday lunches with grandchildren . . . One of the primary reasons why I landed up doing law was so that I would not disappoint them – and for the longest time, I felt the need to be obliged to them for accepting me. It was probably more because of the society I saw around me than them, because the last thing they seemed to want was a feeling of obligation from my end.”

Indeed, queer sons and daughters need not be obliged to their parents for accepting them. But it will do no harm if a thought is spared for the often turbulent journeys parents make in arriving at a point where their children’s happiness becomes primary and even a means to make peace with their own unfulfilled desires. Or, if one has to be more optimistic, who knows queer sons and daughters may just be able to help their parents make a fresh go at that missed bus years ago?

Pawan Dhall aspires to be a rainbow journalist and believes in taking a stand, even if it’s on the fence – the view is better from there!
Posted by Varta at 09:03