Debates are pivotal to human development. Whether it is women’s suffrage or finding a cure for AIDS, debate has been integral to addressing key social concerns. These include the issues of stigma and discrimination lesbian, gay, bisexual, transgender, intersex and other queer communities in India have to grapple with. I was part of a recent debate on the quality of media portrayal of queer people, which is a sensitive issue and has often been prioritized by queer activists as an area of intervention. The debate was organized by Sappho for Equality, a Kolkata-based community initiative dedicated to fight for the cause of lesbians, bisexual women and trans men (female-to-male transgender people). The motion for the debate was ‘Media Sensationalizes LGBTIQ Lives’.

Organized as part of Sappho for Equality’s annual media queer interface, the debate involved college students, six on each side of the motion, and media representatives acting as members of the jury. While the participants were from educational institutions in Kolkata like Presidency University, Jadavpur University, University of Calcutta, and St. Xavier’s College, the jury consisted of Sovan Tarafdar, Editor, Editorial Section, Ei Samay; Chandrima S. Bhattacharya, Associate Editor, The Telegraph, and Subhojit Bagchi, Bureau Chief, The Hindu. The moderator was Sayan Bhattacharya, Contributing Editor, Kindle Magazine. About a 100-strong audience attended the debate organized at Rotary Sadan on February 25, 2015.


Sappho for Equality, through this debate, not only tried to create a platform for public interaction on LGBTIQ or queer concerns but also critique the representation of queer lives in various media. Speakers against the motion emphasized that the media have played an integral part in the growth of the Indian queer movement. Even before the Delhi High Court verdict on Section 377, Indian Penal Code in 2009, the media were supportive of the queer movement’s struggle for human rights. As far back as late August 1992, The Illustrated Weekly of India ran a two-page story Indian, Gay and Unhappy. Earlier, the weekly Sunday carried a cover story on homosexuality in India with gay rights activist Ashok Row Kavi on the cover. More than a decade later, in 2004, The Hindustan Times’ Sunday magazine Brunch published a cover story Glad to be Gay, which was a first person account of a gay man living in India.

In 2005, when Prince Manavendra Singh Gohil from Gujarat came out publicly as gay, both Indian and world media anointed him as the “first openly gay royal”. The media have not only carried in-depth interviews with members of queer communities, but have also interviewed parents of queer individuals – Chitra Palekar: ‘Amma, I’m a Lesbian’ Didn’t Shock Me in The Times of India, or Mina Saran, mother of the late filmmaker Nishit Saran.

People speaking for the motion criticized the media for presenting queer lives in a mostly one-dimensional, unethical and irresponsible manner. In order to sky rocket their viewership or readership, the media have sensationalized queer lives time and again. With maximization of profit as the goal, the media only care about ‘good stories’ that are saleable. In the process, queer communities receive mostly negative media attention, particularly from the mass media during events like the pride walks. Most newspapers end up representing such events as drag shows. Often on popular entertainment TV channels, queer people are presented as incredibly bold and flashy, and to be hypersexual. 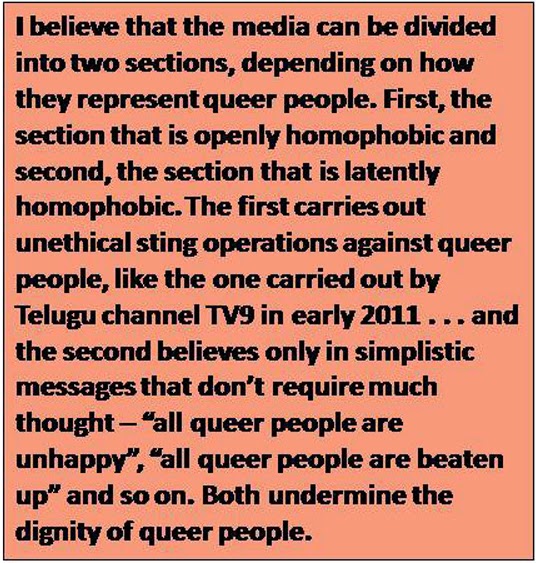 I believe that the media can be divided into two sections, depending on how they represent queer people. First, the section that is openly homophobic and second, the section that is latently homophobic. The first carries out unethical sting operations against queer people, like the one carried out by Telugu channel TV9 in early 2011. Some ‘brave journalists’ registered on an online social networking site connected with gay men, had telephone conversations with some of them and then telecast their names and pictures in order to ‘expose’ the “rampant gay culture in Hyderabad”. The Bangalore-based English TV channel News9 re-telecast the same. One was left wondering what the purpose of these telecasts was. Not only were they in gross violation of the News Broadcasters Association’s guidelines on privacy and sting operations, they also seemed incongruent given the Delhi High Court’s 2009 judgment decriminalizing adult consensual same-sex sexual relations.

The debate had no clear winners, though best speakers from each side of the motion were rewarded. As the moderator Sayan Bhattacharya said, issues such as media representation of queer people cannot be settled in black and white. He also screened a number of popular advertisements seen on TV, some of which had limitations despite trying to take a progressive stance on various social issues like gender and sexuality equity.

The event was a success for various reasons but I think the most important was its bilingual form. This ensured that a strong queer-friendly message went out to a larger audience than it would have, had the debate been only in English.

On a personal note, I would like to thank Sappho for Equality for organizing the debate, where youth, including queer youth, could interact face-to-face with media personnel, and also for giving me the opportunity to speak at a public forum. This was my first time speaking in public. My mother accompanied me and was of great support. She kept telling me everything was going to be alright, and it did!

Kaustav Manna studies psychology in Asutosh College, Kolkata, and is a photography enthusiast and freelance writer.
Posted by Varta at 01:15

Email ThisBlogThis!Share to TwitterShare to FacebookShare to Pinterest
Labels: Homophobia, My Story