Insight, Sep '15
Trans woman activist Santa Khurai tells Pawan Dhall how she pushed hard to help her friend Sandra Nandeibam secure admission in a college stating her gender as ‘TG’. This was possibly the first such instance in Manipur since the Supreme Court verdict on transgender identities and rights in April 2014, and perhaps more such ‘exceptions’ on the ground would propel faster formulation of policies, systems and rules to implement the verdict


Pawan: Santa, congratulations on your and Sandra’s success! How did this come about?

Santa: In June this year, Sandra Nandeibam (earlier Nandeibam Sandeep Singh) succeeded in securing admission in the D. M. College of Arts Imphal as a trans woman, probably the first trans person in Manipur to have managed in breaking a social barrier that does not recognize any gender beyond male and female.

Going by a University Grants Commission directive (based on last year’s Supreme Court verdict on transgender identities and rights), the college had expanded the gender options in the college admission form to include ‘TG’ (or transgender). Sandra opted for ‘TG’, and also submitted the legal documents for gender change (court affidavit, newspaper declarations, gazette notification and other papers) to support her option.


After submitting the admission form, Sandra appeared for the entrance examination. But a few days later, when the list of selected candidates came out, her name was not on the list. The very next day Sandra and I went to the college and met the Principal Adhikarimayum Nungshitombi Devi. I urged her to give Sandra a chance to study in the college, as it would not only benefit her but also encourage several other trans persons in Manipur to pursue higher studies. I explained to her the current situation faced by trans persons in the state when it came to educational opportunities. 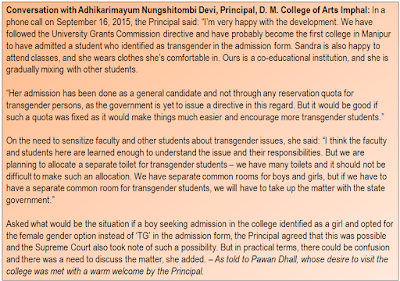 Pawan: How did you take the matter forward?

Santa: After hearing out the Principal, I shared with her a brief on the Supreme Court judgement, which directed the government to ensure equal opportunities to transgender people in every social sphere. She said there must be some legal or official documents to prove Sandra’s transgender identity. We informed her that Sandra had submitted all the relevant documents along with the admission form. The Principal then called a member of the college council, who was also involved in developing the student selection criteria. She asked him why Sandra was not selected in the entrance examination, though she had submitted all the documents related to her transgender identity.

The college council member explained the reservation system followed by the college. According to government guidelines, the Scheduled Caste (SC), Scheduled Tribe (ST) and Other Backward Class (OBC) students had to score a minimum (cut-off) level of marks to secure admission. He said the same cut-off (in the absence of a specific one for transgender students) could be considered for Sandra, but at that point of time, the marks scored by her were not known. Thus we were advised to first find out Sandra’s score from the declaration list. With this the college council member left, but I continued the conversation with the Principal. We again requested her to consider admitting Sandra from the point of providing encouragement to a marginalized community, especially when even after more than a year of the Supreme Court judgement the government had not worked out how to provide support to transgender students.

The Principal asked us to find out Sandra’s score in the entrance examination. We checked and found that it narrowly missed the cut-off level for SC, ST and OBC students. Fortunately, the Principal did not turn us away. She asked for Sandra’s examination roll and serial numbers, and noted my mobile phone number. She promised to call me on the admission day meant for the non-selected candidates, which was a couple of days later. But we kept waiting and there was no call, either from the Principal or any other staff member of the college.

Santa: We made a follow-up visit on the very same day, and found a long queue outside the college. We went directly to the Principal’s office and again met her. This time we also shared the operative part of the Supreme Court judgement, pointing out that we were only asking for what the apex court had said we were entitled to. The Principal thoroughly read the document and said we should have produced it on the very first day! Further she made a phone call to the Honourable Minister Education, Manipur and asked about reservation for transgender students seeking admission in colleges. The minister agreed that reservation was needed, but nothing had been decided so far. The Principal asked us to come again two days later, and assured us that she would keep her promise.

Two days later, we again found a huge crowd outside the college gate. The Manipur Police were controlling the crowd and no one was allowed to enter the college till the security personnel gave the go-ahead. Sandra waited in the women’s queue for some time, but had to move back when some of the men abused and harassed her for standing in the women’s queue. 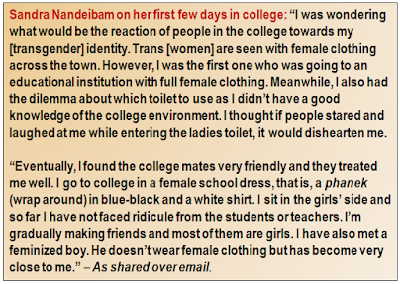 We wasted no more time and started looking for the college authorities. We saw a woman outside another college gate through which only the college authorities were allowed to enter. We found out that she was a lecturer in the college. She refused to give us the Principal’s phone number, but agreed to call and tell her that two trans women who wanted to talk to her about reservation for transgender students were waiting outside. She also mentioned our names. When the Principal took the call, the phone was passed on to me and I told her how Sandra had been thrown out of the queue. I said we were not there for any favours, but were looking for implementation of what had been promised to transgender people as a matter of their right.

The Principal answered genuinely that she had been waiting for us since the morning, and because of the rush, it was impossible to keep the main college gate open. Then she advised that Sandra should come closer to the gate, and when her name was called out by the security personnel, she went in and found the Principal waiting for her. After some formalities, Sandra’s admission was finalized – not under any reservation or quota but definitely as a transgender student!

Pawan: What are the subjects Sandra is studying?

Pawan: Let’s wish her all success!

Santa Khurai is a queer activist and champion of transgender rights based in Manipur. She is associated with civil society organizations Solidarity and Action Against The HIV Infection in India and the South Asian Human Rights Association on Marginalised Sexualities and Genders. Writing poems and stories on queer issues is one of her many passions.

Pawan Dhall aspires to be a rainbow journalist and believes in taking a stand, even if it’s on the fence – the view is better from there!
Posted by Varta at 09:26