A filmmaker speaks out about his self-realization as a gay person; an artist presents artwork that was part of his coming out process as a gay man; Gaylaxy, an English webzine on lesbian, gay, bisexual, transgender and other queer issues launches a Hindi version; mental health professionals strategize on how to take on social and legal stigma around homosexuality; the mother of a queer activist speaks out on the need for everyone to introspect on gender and sexual diversity . . . snapshots from the February 2014 issue of Varta . . . snapshots also of a larger reality. 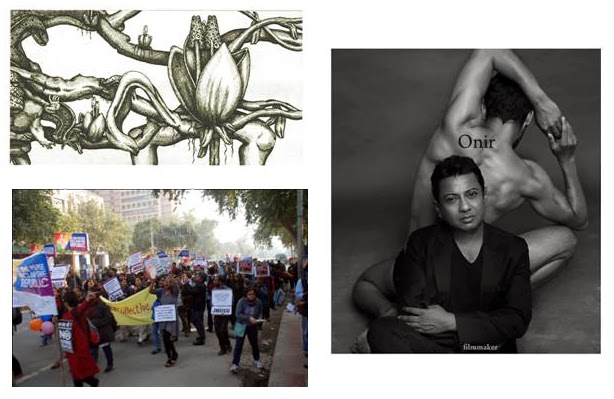 The Supreme Court’s verdict reinstating Section 377 of the Indian Penal Code on December 11, 2013 and its subsequent rejection of petitions seeking a review of the verdict on January 28, 2014 have not dampened the fire burning in people’s hearts. If anything, the Indian queer movement has developed new roots and shoots. Republic Day on January 26 this time saw a unique ‘alternate’ parade of several marginalized communities together in New Delhi. This was an effort to point out that the official Republic Day parade on Rajpath represented an India that had failed to protect its girls and women from violence, ensure meaningful development of Dalits, foster a supportive environment for the disabled, and along with all this, an India that had missed a chance to remove the unjustified tag of ‘criminal’ from the lives of its queer people.

Support for the queer movement first grew exponentially when the Delhi High Court read down Section 377 in July 2009 and decriminalized queer people. The Supreme Court’s verdict setting aside the Delhi High Court ruling has ironically given the movement another shot in the arm. Even if the stand taken by some political parties is ambivalent or downright homophobic, at least a few parties like the Congress have clearly supported decriminalization of queer people. Equally interestingly, a forum like Christians against Homosexuality in Chennai has given rise to its counter-point Christians against Homophobia in the same city. Students, not just from law colleges but also from other streams of learning, are debating Section 377 threadbare through panel discussions and other forums. Queer people in Guwahati are planning the first ever rainbow pride walk in North-East India on February 9, 2014 with support from human rights organizations.

The list could go on and on. So could the list of adverse impacts of the Supreme Court actions – people dropping out of health programmes for fear of being identified and harassed as queer persons; youth in same-sex relationships reporting threats and intimidation by family members and neighbours; trans women reporting increased harassment and abuse even while walking on the streets . . . yet the atmosphere is not one of defeat or letting go. The fight is on – legally, socially, digging deep within one’s soul to introspect and find a never-before resolve. And in these challenging times, Varta is happy to bring you stories of survival, courage and love.

Pawan Dhall aspires to be a rainbow journalist and believes in taking a stand, even if it’s on the fence – the view is better from there!
Posted by Varta at 00:20