Insight, Happenings, Aug '14
A quick round-up by Pawan Dhall on developments related to transgender and Hijra welfare in eastern India in the month gone by

Purulia / Bhubaneswar / Kolkata / Patna, July-August 2014: The run-up to the first birthday of Varta blog couldn’t have been better! The entire month of July saw a number of happenings in eastern India that took the path-breaking Supreme Court April 15, 2014 judgment on transgender identities and rights that much closer to reality on the ground. This was welcome relief from a slowly building up anxiety about when and how the court’s judgment would be implemented. Not that the question of an apex national body to oversee and coordinate the implementation systematically was answered. But it was good to see both civil society and state government initiatives catch the ball lobbed in the air by the Supreme Court and run with it!


On July 10, 2014, intimation was received from Rajarshi Chakraborty, Assistant Professor, Department of History at the Sidho-Kanho-Birsha University, Purulia that the university had probably become the first in West Bengal to include the ‘other’ gender option (apart from male and female) in the forms for students seeking admission to post-graduate courses. An excited Rajarshi Chakraborty, who is also an experienced advocate on gender and sexuality in the education sector, informed that the decision, a unanimous one, was taken a day before in a meeting headed by the university Vice Chancellor Professor Samita Manna. Earlier, on July 3, 2014, the same institution had also announced the inclusion of the ‘other’ option in the forms for the recruitment of professors, associate professors and assistant professors in the university. This too, in all likelihood, was a first for the state of West Bengal.

By far the most encouraging news came from neighbouring Odisha. On July 17, 2014, a number of support forums for Hijras and other trans women, like Odisha Kinner Mahasangha, SAKHA, Mamta Welfare Trust, Surakhya Kinner Sangathana and All Odisha Hijra Mahasangha, got together to organize a dharna (sit-in protest) in front of the Vidhan Sabha in Bhubaneswar to demand urgent implementation of the Supreme Court judgment on transgender identities and rights. Around 100 trans women and supporters gathered for the protest on Mahatma Gandhi Marg, which attracted wide media attention.

The meeting with Usha Padhi and Excise Minister Damodara Rout was fruitful. It was in a way a continuation of a dialogue that started last year between SAKHA, other trans women’s support forums and the Odisha Department of Women and Child Development (see Queer Developments in Odisha in the July 2014 issue of Varta). The trans women community leaders submitted a 10-point charter of demands, the key demand being “to set up a Transgender Commission which would work for equity, access and empowerment for the transgender community, led by transgender community representatives of Odisha”. An enumeration of the trans women population in the state; large scale public awareness to address stigma and discrimination against trans women; ensuring access to livelihood opportunities, social security and legal aid; and setting up separate wards for trans women in government hospitals were among the other demands.

The government sought time till early August to consider and prioritize some of the demands, and true to their word, they called another meeting on August 6, 2014 with the trans women community leaders. Arti Ahuja, Secretary, Department of Women and Child Development met the leaders and expressed support for their cause. Soon after, a laughing and excited Sadhana Kinner was again on the phone to update Varta on the success of the meeting – the government had indeed agreed to set up a transgender and Hijra welfare board, support a media campaign to create awareness about trans women and start with a pilot project on livelihood for trans women. An official announcement on this would be made later this month. Watch out this space for further updates!

A day before the momentous developments in Bhubaneswar, on July 16, West Bengal also witnessed a transgender community and government interface in Kolkata. Dr. Shashi Panja, Minister of State in the Council of Ministers of West Bengal with independent charge of women and child welfare and social welfare, chaired a meeting with support forums for trans women and trans men from across the state. The minister won many hearts with her willingness to hear out all sides and readiness in accepting the fact that transgender communities had suffered neglect for too long. The meeting concluded with the possibilities of a transgender welfare board being set up in the state. This was perhaps not as conclusive as the developments in neighbouring Odisha, but surely something to look forward to.

Cut to Patna, Bihar. On July 23, 2014, transgender and Hijra welfare received a boost in the state when Kiran Ghai Sinha, Chairperson, Child Protection and Women Empowerment Committee of Bihar Legislative Council, raised the matter in the Legislative Council and spoke about the marginalization faced by the trans communities in society. Citing the latest Census (2011) figures for the trans women’s population in India of around 4,90,000, she argued for immediate attention to the realization of their human rights. 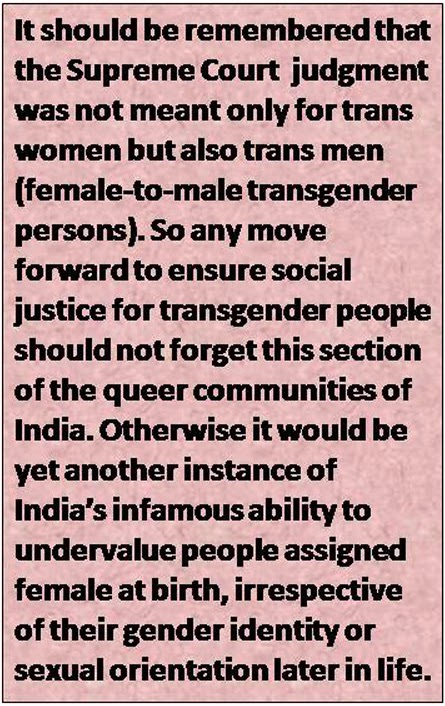 Speaking to Varta over phone after the session in the Legislative Council, she said there was heartwarming support from all political parties and it was decided that a government-community interface would soon be organized. Officials from all key state government departments would sit across the table with the trans women community representatives of Bihar to discuss their health and development priorities and plan steps to meet these needs. At the time of this report being written, processes to facilitate the interface were under way. Varta Trust, through its links with trans women community leaders in Bihar, was also involved in facilitating preparedness on the community front for the interface.

All good news so far and it was interesting to see that almost all government initiatives for trans people were being lead by women ministers and officials. We hope that their male counterparts would show their hand as well. Equally importantly, it should be remembered that the Supreme Court judgment was not meant only for trans women but also trans men (female-to-male transgender persons). So any move forward to ensure social justice for transgender people should not forget this section of the queer communities of India. Otherwise it would be yet another instance of India’s infamous ability to undervalue people assigned female at birth, irrespective of their gender identity or sexual orientation later in life.

Pawan Dhall aspires to be a rainbow journalist and believes in taking a stand, even if it’s on the fence – the view is better from there!
Posted by Varta at 03:46