Of birthdays and bans


August is Varta’s birthday month. On the first day of the month, we turned two and celebrated the occasion both online and offline. Around the same date, the Government of India blocked 857 porn websites to protect ‘morality’ and ‘decency’. In effect, this proved to be an apt birthday gift for Varta as the ‘dialogue on gender, sexuality and intimacy’ shot up hundredfold on social media, in newspapers and on TV shows, and in drawing rooms across India. Radio jockeys, irrespective of gender, went to town cracking jokes, mostly inane but a shade better than their usual banter. For a while, no social visit was possible without the ban creeping into the conversation, sheepishly or accompanied with raucous laughter. It was almost as if the government had inadvertently brushed past the Indian social G-spot!


The widespread (though not quite universal) condemnation of the big brotherly ban shows how the adult Indian mind ticks, never mind the outer appearances. The lingo of ‘right to privacy’, ‘right to freedom of speech’ – human rights in essence – seems to have caught on at least in certain circles. The government could not have been immune to this, for eventually it revoked and ‘fine tuned’ the ban to cover only child pornography, only to be informed by the Internet service providers (ISPs) that they could not separately ban child pornography because of technological limitations. Thus, as of now, many of the websites blocked earlier continue to be out of bounds because the ISPs want the government to come up with a more specific and practical solution than ad hoc directives. In the meantime, many Indians, at least those with Internet jugaad at their disposal, continue to get their pleasure fix as before. 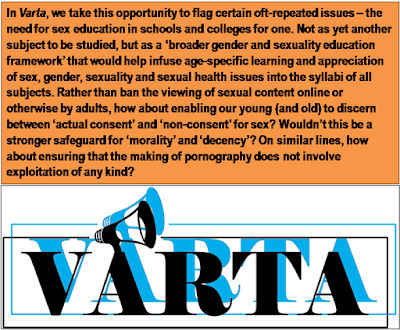 In Varta, we take this opportunity to flag certain oft-repeated issues – the need for sex education in schools and colleges for one. Not as yet another subject to be studied, but as a ‘broader gender and sexuality education framework’ that would help infuse age-specific learning and appreciation of sex, gender, sexuality and sexual health issues into the syllabi of all subjects. Rather than ban the viewing of sexual content online or otherwise by adults, how about enabling our young (and old) to discern between ‘actual consent’ and ‘non-consent’ for sex? Wouldn’t this be a stronger safeguard for ‘morality’ and ‘decency’? On similar lines, how about ensuring that the making of pornography does not involve exploitation of any kind?

It is no one’s case that child pornography should be condoned. In which case, how about cracking down harder on child trafficking and sexual exploitation rather than just cover up the end product? On the other hand, if preventing minors from viewing pornography is the concern, how about training parents to use better child locks on different gadgets? Better still, why not encourage and enable parents to talk frankly about sexual matters with their children, a known antidote to heightened curiosity in the young for anything that is supposed to be out of bounds? Let’s give dialogue a chance over pernicious (or ‘pornicious’) bans!

* * *
In this issue of Varta, read about another ‘birthday remembrance’ To CC with Love! – a flashback on the occasion of the erstwhile Counsel Club’s 22nd foundation day on August 15.

Pawan Dhall aspires to be a rainbow journalist and believes in taking a stand, even if it’s on the fence – the view is better from there!
Posted by Varta at 12:33