Pallav Bonerjee continues his series of personal narratives on psychology, people and destiny, this time in collaboration with a patient who provides his perspective on depression

When I started collecting my thoughts on depression as a mental illness and how strongly it affects the life of an individual, I couldn’t help falling back on some of the many anecdotal instances narrated to me by patients during their interactions with me as a therapist. I have tried to recreate some of them here with the intention of allowing others a glimpse into the life of an individual suffering from depression. I have also tried to collaborate for the first time with a patient who I felt could provide a unique and invaluable perspective on depression.


Sometimes, there are periods in one’s life when things around don’t seem to make much sense anymore. One becomes ‘disconnected’ so to speak from one’s environment. There is an experience of emotional inertness, where participation in the world becomes increasingly effortful and unattractive. Sadness becomes the prevalent mood state. The direction of flow of life becomes vague, as if one were getting pulled and pushed by equally strong unknown forces from opposing directions. After a while, it seems futile to attempt to control it and one just gives up. Social interactions become meaningless and one starts living in an unhappy solitude. Time slows down, though for everybody else it keeps moving at a frantic, mindless pace. 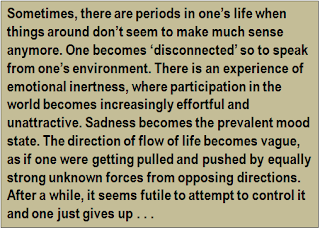 One becomes hyper-sensitive to the multitude of sensory stimulations all around. It is as if the brain has suddenly shifted gear from a parallel to a serial processing mode. Attention shifts from one stimulus to another, in slow motion – the soft whirring of the fan, the gentle breeze on the skin, the dry heat, the parched tongue, the heavy eyes . . . Minute aches and pains in the body occupy the centre of attention and seem intense. Thoughts get fuzzy and there is lack of clarity of purpose. The simplest of decisions appear to be only possible after mammoth internal debates that are exhausting. Every alternative seems equally justified and probable and one tends to get stuck in a limbo for long periods, unable to decide the next course of action. Inaction feels safer, more rewarding.

This is quite different from the usual ups and downs that most of us experience on a regular basis as a consequence of daily life stressors. This seems more pervasive and doesn’t quite go away on its own, even after stressful situations abate. Such is the clinical picture of depression as a mental health challenge, which affects about 15-20% of our population (rough estimates). 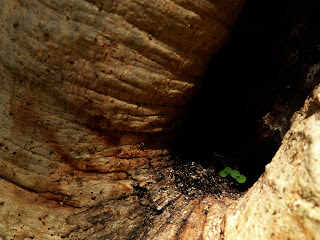 Atul (name changed) is in his early 30s and suffers from depression since the past few years. He takes anti-depressant medicines and undergoes psychotherapy. Recently he also underwent modified electro-convulsive therapy (MECT) to deal with recurrent thoughts of harming himself. He worked well for himself in an advertising agency some time ago. However, for various reasons mostly attributable to his illness, he quit his job and now finds it increasingly difficult to rehabilitate himself professionally. There are times when he is quite alright and manages most of his responsibilities well. And then there are those dark and gloomy periods when everything starts crumbling down around him.

During these periods Atul finds it very difficult to get out of bed in order to engage in anything productive or even routine. He skips appointments, forgets medicines, avoids people and isolates himself in his room, mostly brooding and feeling helpless. He also becomes irregular with his sleeping and eating habits, stays up most of the night snacking on biscuits and ice creams and sleeping through the day. He says that eating at night is one of those rare things that make him feel better, even if for a short while. This results in a lot of unpleasant exchanges with his parents, who find it difficult to accept such a lifestyle from a 30-year old, well-educated boy.

When I asked Atul if he would like to collaborate with me in sharing his understanding and perspective about living with depression as an illness and undergoing treatment for it since the past few years, he seemed tentative at first. However, with some encouragement he agreed to write about it and reach out to more people with his story, some of whom may well have a similar story to share. Excerpts from Atul’s writing follow:

“A depressed person is one who is unusually sad and hopeless; someone who alienates himself or herself from society and avoids human interaction. It is characterised by low mood, lack of energy, loss of confidence, negative self-image, negative thought patterns and reduced sexual desire. However, many people tend to believe depression to be a figment of one's imagination; a weakness in character. They believe it happens to those who have a fussy nature or to people who get annoyed and disheartened on not getting what they want. People feel that it is simply the inability or lack of desire to get better, that depression is self-induced and it is a question of one’s will power. They often don't realise that depression has a strong biological component. Its cause is not unitary and lies beyond the whims and fancies of the depressed individual. It is not simply a question of lack of determination to get better.

“I find this line of reasoning rather amusing. No person wants to or enjoys feeling sad, hopeless and helpless. Feeling tired and gloomy all the time are not pleasant states of mind. And they are certainly not mental states that one prays and works hard to achieve. The bottom line is that everyone wants to be happy. Everybody wants to experience joy and positivity in their life – even a depressed person.

“I often wish that everyone should compulsorily experience depression at least once in their lifetime, so they get to know what it feels like to be depressed. Hopefully, then they will be able to understand and empathise with people suffering from this illness. By personally experiencing this phenomenon, people will realise that it is not due to a flaw in one's character or the lack of desire to get better. People will also realise how difficult it is to live life in such a state; to just exist, all the while hoping and praying to become normal once again.

“It is a myth that depression is a phenomenon experienced only by women. Men also get depressed, though many don't report it since they feel it portrays them as weak . . . 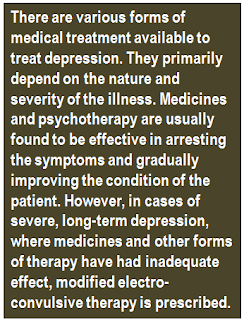 “It feels bad when you see your near-and-dear ones, friends and family enjoy life, prosper and get ahead, while you feel alone, trapped and caged, as if stuck in a time capsule. You start to question the dependence on medicines and therapy to the point where you even pity yourself and mock your condition. You wish you could just break away from the invisible shackles and fly away. Those are times when you understand what it really means to be free. Birds and their ability to fly freely at will take on a whole new meaning. However, it seems like a very tough thing to do and a strong feeling of helplessness takes over every time you attempt to do something on your own.

“There are various forms of medical treatment available to treat depression. They primarily depend on the nature and severity of the illness. Medicines and psychotherapy are usually found to be effective in arresting the symptoms and gradually improving the condition of the patient. However, in cases of severe, long-term depression, where medicines and other forms of therapy have had inadequate effect, MECT is prescribed, which involves passing of very small amounts of an electric current through the brain to induce a seizure under general anaesthesia. It unsettles the neuro-chemicals present in the brain, shaking them up to break the existing neuro-chemical-electrical brain circuitry. It is akin to the ‘refresh’ button on the computer.

“Predictably, there is confusion and memory loss for a short while. One may have difficulty in remembering certain specific events and incidents immediately prior to or after MECT. Some patients may have slight slurring of speech or feel awkward and uneasy because of the (temporary) memory loss. Fortunately, these side-effects are short-term in nature and one recovers completely in four to six weeks, which includes all memories and knowledge. On the positive side, it does help one feel better emotionally and makes one hopeful of recovery. 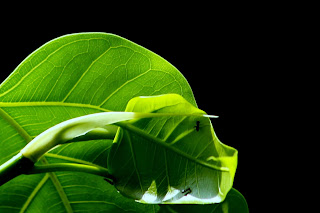 “From my personal experience, I can vouch that MECT does not cause pain or discomfort during the treatment, as the patient is sedated during its administration. Unfortunately, popular media has painted an inaccurate, distorted, scary and untrue picture about ECT. A lot needs to be done to dispel the misinformation. Interesting, fun, light-hearted movies and television shows involving mental health themes need to be developed to shed light on depression, other mental health issues and different forms of treatment. Opportunities where the masses are exposed to authentic information will help sensitise them towards people who are battling different mental health problems.”

Vahista Dastoor wields the camera to get her point across when she is not documenting child rights, mental health or gender related issues.
Posted by Varta at 01:18