When Bahujan intellectual Kancha Ilaiah inaugurated the ‘1st Telengana Queer Swabhimana Walk’ last February, little did anyone know that it would spark a deluge of assertion of Dalit identities in queer spaces across the country. The well-known writer’s presence was part of the organiser’s conscious push to reach out to as many struggles and movements across the region – as a result, Dalit and Bahujan contingents marched in the pride walk. Later in July, Dalit feminist author Gogu Shyamala inaugurated Hyderabad’s queer carnival and expressed solidarity with the struggles of LGBTQIA people (an umbrella term for queer communities or people with non-normative genders and sexualities).


The next 12 months were remarkable as queer Dalit individuals asserted their identity from the stage at the Delhi Queer Pride, questions of caste, gender and sexuality politics dominated conferences in various cities, trans feminists engaged with caste and class issues in a recent event in Kolkata, and online queer spaces saw growing discussions on intersectional approaches. In short, caste was out of the bag.

Not that it was ever hidden, simmering beneath the surface of the urban, polished face of our queer movement. Caste is an unmistakable reality for millions of people in South Asia where societies are structured on a vertical stratification. For centuries, upper caste communities held on to wealth, influence, education, power and history with impunity and violence, brutally putting down any lower caste individual daring to reach out for a share of the pie. They invoked the powerful notion of purity and pollution to perch themselves atop the social chain, cracking down on any attempt to wrest away any influence. 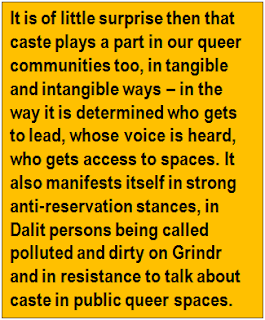 The historical advantages have transformed into class and social capital in modern times but India is still strongly governed by caste. For most, this may be exhibited in the rural countryside, in the form of honour killings, untouchability and genocides such as the episodes in Laxmanpur Bathe (Bihar, 1997), Khairlanji (Maharashtra, 2006) or Dharmapuri (Tamil Nadu, 2012). But take a look around our cities, and you will find caste festering in our shiny malls, in upper caste monopolization of the academia, literature and cultural expression. It will be present in our behaviours, in our visceral opposition to reservations, in our treatment of house helps and our shutting down of any caste critiques.

It is of little surprise then that caste plays a part in our queer communities too, in tangible and intangible ways – in the way it is determined who gets to lead, whose voice is heard, who gets access to spaces. It also manifests itself in strong anti-reservation stances, in Dalit persons being called polluted and dirty on Grindr and in resistance to talk about caste in public queer spaces.

This is why 2015 was remarkable. The Chennai pride walk in June unequivocally stated the queer movement’s solidarity with the caste question. Tamil Nadu, known for its powerful anti-caste movement, has had a history of intersectional struggles, especially between lower caste and gender-sexuality activists. A day before the pride walk, the organisers held a seminar on caste and queerness, calling in Dalit feminists, queer persons and long-term Dalit activists and scholars. The bilingual event concentrated on exploring caste and the fissures within the queer movement, trying to find ways to extend solidarity.

In the Bangalore pride march on November 22, 2015, people walked with posters – deemed controversial later – that connected beef eating with one’s queer identity and there were shout-outs to the interconnectedness of struggles.

A week later, Delhi saw a stronger articulation of lower caste individuals from the pride stage, with a performance and a manifesto that put forth the idea of a robust and proud Dalit identity. Through poetry and prose, three young individuals emphatically stated that their lives and struggles as queer people were inseparable from their identity as Dalits and any LGBTQIA fight must include caste. Several people walked with “Queer, Dalit and Proud” posters.

Similar articulations were witnessed at the ‘14th Kolkata Rainbow Pride Walk’ on December 13, 2015, where the common literature distributed mentioned fighting against caste as part of the queer movement’s agenda. 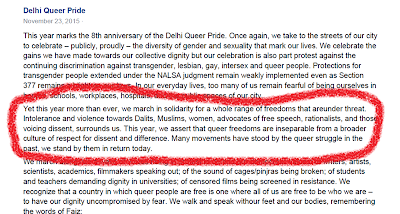 A meeting held by Women against Sexual Violence and State Repression in Delhi last month also focussed on building alliances between caste, gender and sexuality. Several panellists discussed how the movements could come together, in the backdrop of similar discussions around the rights and practices of land, household help and others. On January 10 this year, trans feminists gathered in Kolkata for a meeting called by Samabhabana, where questions of caste, class, language and regional domination were discussed.

It is also important to acknowledge why some voices get amplified while others are invisibilised. The meeting in Kolkata had Dalit activists like Manoranjan Byapari writing for decades on issues of social oppression in West Bengal, who haven’t been as powerfully heard as many who work in metro cities, talk in English, come from a certain class and can articulate ‘respectably’. The caste-queer struggle has been carried on for centuries, if not more, by lower caste trans persons, who have never been lauded for their contribution. Cities like Hyderabad and Chennai have had a long history of caste-gender-sexuality connected struggles and such solidarities have existed through people’s movements, without much fanfare.

Away from the spotlight, millions of people across the country are enacting powerful struggles against both gender-sexuality and caste shackles. Many of them are poor, live in rural areas, aren’t mainstream-educated, and can’t market their activism. But they’re at the forefront of our struggle against patriarchal oppression and hope for a better day.

Dhrubo Jyoti studied physics only to go into journalism. He now works with The Hindustan Times and freelances with Gaylaxy.
Posted by Varta at 23:10