Advice - Disability, Jan '16
Shampa Sengupta argues that both government and civil society are not living up to their commitment towards women with disabilities


Rarely do we see news or photographs of women with disabilities on the front page of any newspaper. So when Ira Singhal made it to the first page of all the national dailies of India in July last year, it was a matter of great joy. Ira Singhal, who topped the Union Public Service Commission examination and made all of us proud, talked about the hurdles she faced in life. According to some media reports, she maintained that her parents did not bring her up as someone with ‘special’ problems and the difficulties she faced were more on grounds of gender than disability. Since this is her personal experience, we believe in her words. However, the majority of disabled women face multiple levels of discrimination. Sometimes they articulate the discrimination they face; at other times they perhaps don’t even understand the inequity and remain in an unaware stage without striving to change the situation.


The policy and law makers in India did not give much attention to this issue prior to the discussions, debates and drafting of the United Nations Convention on the Rights of Persons with Disabilities (UNCRPD). One may recall here that during the drafting of UNCRPD, there were debates on whether there would be enough to have a chapter on women with disabilities or the gender component should run through the text of the convention. In the end, it was decided that a twin-track approach would be applied and there would be both a separate chapter as well as mention of women with disabilities in the other articles of the convention.

Article 6 – Women with Disabilities mentions: “(1) States Parties recognize that women and girls with disabilities are subject to multiple discriminations, and in this regard shall take measures to ensure the full and equal enjoyment by them of all human rights and fundamental freedoms; (2) States Parties shall take all appropriate measures to ensure the full development, advancement and empowerment of women, for the purpose of guaranteeing them the exercise and enjoyment of the human rights and fundamental freedoms set out in the present Convention”. 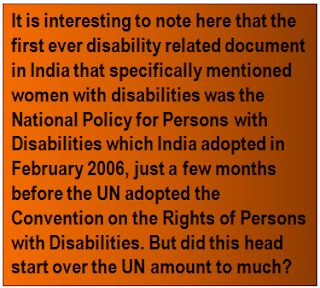 “Programmes will be undertaken to rehabilitate abandoned disabled women / girls by encouraging their adoption in families, support to house them and impart them training for gainful employment skills. The Government will encourage the projects where representation of women with disabilities is ensured at least to the extent of twenty five percent of total beneficiaries.

Now, all the issues raised in the policy can’t be considered written from a rights-based approach – the women’s movements and disability movements both have enough reasons to criticise the policy. But whatever be the lacunae, the key point to deplore is the almost zero level of implementation of the policy, which, quite ironically, says (in Para 62) that “Every five years a comprehensive review will be done on the implementation of the National Policy. A document indicating status of implementation and a roadmap for five years shall be prepared based on the deliberations in a national level convention. State Governments and Union Territory administrations will be urged to take steps for drawing up State Policy and develop action.”

Almost a decade has passed by, but the governments at national and state levels have not bothered to review the implementation of the policy. The saddest part is, of course, that the civil society has remained completely silent on this. Whereas demands to bring in new legislation on disability has been made by many, few disability activists have raised the question why the existing policy has not been implemented or a more basic demand that the policy needs to be reviewed and reframed even before it is acted upon.

It is also important to note here that some of the states have formulated their own policy on disability. The Office of the Commissioner for Persons with Disabilities, West Bengal also promised that they would formulate a state disability policy, so since 2011-12, there were several dialogues with the concerned officers about how and when the policy would be drafted. In a recent conversation with a senior bureaucrat of the concerned department, I was informed that the state did draft a policy but during consultations a “very big NGO” objected to the formulation of a state policy before the Rights of Persons with Disabilities Bill 2012 was passed nationally. Given the resistance from civil society, the state government doesn’t seem too keen on adopting the policy for the moment.

So the status of women with disabilities remains the same – notwithstanding what India promised to the UN, the Rights of Persons with Disabilities Bill is yet to materialize, the National Policy for Persons with Disabilities is not implemented, and in West Bengal, the officials conveniently pass
the buck to NGOs and blame them for its own failure to adopt a state level policy. In the meantime women (and other people) with disabilities keep facing multiple levels of discrimination and abuse, which only a strong grassroots people’s movement can end.

Shampa Sengupta is a Kolkata-based activist working on gender and disability issues for more than 25 years. She is the founder of an advocacy group called Sruti Disability Rights Centre and is Executive Committee Member, National Platform for Rights of the Disabled. She will be happy to answer your queries on disability and related issues. Write in your queries to vartablog@gmail.com, and they will be answered with due respect to confidentiality.
Posted by Varta at 20:08