Vidya: Look, your school batch mates are organizing another reunion. There’s a Facebook post. You shouldn’t miss it this year!

Sameer: I’m still not sure I want to attend it. These days, too strong a dose of nostalgia doesn’t quite agree with me.

Vidya: But some of them were your fast friends, and you don’t tire of remembering your teachers.

Sameer: Yes, they were all important people in my life – my best friend from the seventh till the 10th standard who helped me realize I too could be a chatterbox, the guy with whom I got into an ink splattering-fight, the mathematics wizards in class, mates from my neighbourhood who went swimming with me, students who so often denied me the first rank, even those who borrowed my notes and never returned them on time . . .

Sameer: The teachers who taught beyond the syllabus – those geography and mathematics classes were the best! Or those who took over our summer holidays with extra classes on life sciences (including lessons on the human reproductive system), and then those who were always so generous in making poetry, history and chemistry oral tests easier and easier – the excursions, sports events and art contests they organized . . .

Vidya: So why not relive these happy memories with them?

Sameer: Well, I did attend one school reunion and I’ve met some of the batch mates and teachers individually, and it was great talking to them. It’s also been fun rediscovering them on Facebook. But I’m not sure if I want to go further.

Vidya: This sounds as perplexing as unseen dictation tests or math problems from outside text books with no answers to match at the end . . .

Sameer: You said it! But school life also taught us to think for ourselves, and that’s what I’m trying to do.

Vidya: This argument is another googly!

Sameer: I prefer to call it a badminton placement shot. The point is not all my memories of school are happy ones. Speaking about googlies, I didn’t like playing cricket and still can’t forget the shame I experienced when I couldn’t hold the bat straight the only time I played cricket in school. That made me quite a spectacle of sorts among the students. Or the time when I shared in class that I asked my mother to help me with work education assignments. The stunned silence that followed – was it because I mentioned my mother and not father or brother, or because boys were not supposed to be so weak as to ask their parents for help with book binding and electrical circuitry projects? 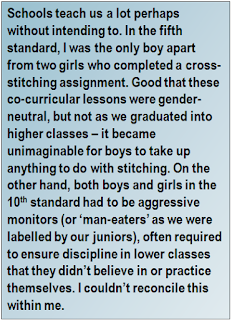 Sameer: Schools teach us a lot perhaps without intending to. In the fifth standard, I was the only boy apart from two girls who completed a cross-stitching assignment. Good that these co-curricular lessons were gender-neutral, but not as we graduated into higher classes – it became unimaginable for boys to take up anything to do with stitching. On the other hand, both boys and girls in the 10th standard had to be aggressive monitors (or ‘man-eaters’ as we were labelled by our juniors), often required to ensure discipline in lower classes (after lunch breaks) that they didn’t believe in or practice themselves. I couldn’t reconcile this within me. Neither could I express shock when a student got injured while playing because I was admonished by my class mates: “Kya ladkiyon jaise react kar raha hai!” Why should it be girlish to express shock, and what is wrong in being like a girl or a different kind of a boy?

Vidya: Oh come on, this happens all the time!

Sameer: That doesn’t make it right. Today we talk about ensuring that all schools should have toilets, clean ones. How about ensuring that they are safe ones as well? I’m not complaining about toilet humour, rather about bullying in toilets. Even one such incident can force many students to carefully pick and choose the time they go to the toilet in school (or any public toilet even after they’ve grown up) . . . stop laughing because it’s not funny!

Vidya: But after these many years, 20 actually since you passed out of high school, all this should be so much water under the bridge . . .

Sameer: Unless you’re the one caught in the flow. You see, I had my share of crushes in school. The initial ones on girls I didn’t speak about because I was shy; but the later ones on boys I didn’t dare to because I was terrified. Who would have understood my very first deep love for another boy, how meaningful it was, how maddeningly heady? Many guys guessed or guessed at my sexual attraction and I had to live with comments like “Yeh to saala homo hai”. Yet, I count myself among the luckier ones.

My bestie didn’t squeal on me when I jokingly told him about my love and that I was gay. The love for reading books inculcated both at school and home helped me realize at age 14 that I wasn’t the only gay person in the whole world. And then I was a quiet all-rounder in studies, arts and sports (barring cricket, of course), so in the trade-off between grades and sexualities, the former won. But what if I had been an average or a naughty student and gay, gender queer or ‘beyond norms and standards’ in any other way? In fact, I know of gay school mates who laboured under an oppressive silence around their sexual orientation and may not have got the best of deals in school or later in life.

Vidya: Well, that was then, but now the Supreme Court of India verdict on transgender identities and rights issued in April 2014 means every school, college and university in the country must ensure inclusion of students who may be transgender. This verdict may not cover gay, lesbian, bisexual or other queer students, but at least it’s a start. Why don’t you bring this up in the school reunion?

Sameer: That’s an idea, but our conversation isn’t about what one authority has said other authorities should do about the lives of certain young people. It is about self-determination. I may have fond memories of my school, teachers and fellow students. But they were like a ‘given’ in mathematics or economics, largely determined by my parents. Today, if I meet them again (as I already do at least once in a blue moon) or do something to express my gratitude and support for them, I would want to in my own time, on my own terms, under no pressure to accept or adjust to their standards of social norms.

Should that be counted against me? Would I be doing my school less proud if I just stayed away and continued to do my work quietly and diligently – so much of it learnt in school anyway? For even the syllabus doesn’t say that I must attend school reunions.