Kolkata, November 17, 2015: With 2016 knocking on the door, where do we stand as women? Sometimes one feels no less removed in time from that of one’s mother’s. Many women these days are financially independent and may be single, but the world around has not changed much. One is still surrounded by walls of fear and apprehensions – walking alone after 9 pm in most cities is a challenge, uncomfortable questions about one’s single status never seem to end, trying doubly hard to prove our intelligent worth at the workplace – the list is a long one and of course, also includes more direct or physical forms of discrimination and violence – rape, molestation, domestic violence, female foeticide . . . we still need to make advances on a lot many crucial fronts, never mind the technological leaps forward!

These and other such thoughts crowded my mind as I sat through a meeting and panel discussion titled ‘Importance of Sexual and Reproductive Health and Rights in the 2030 Global Goals for Sustainable Development’. Co-organized by the Family Planning Association of India (FPAI) and Citizen News Service (CNS) at the Senator Hotel, the meeting was attended by 50-odd health care providers, media persons and social workers engaged with communities of female sex workers, sexual minorities, people living with HIV, as also young people and women living in urban slums.

Issues of family planning, infant and maternal mortality, abortion and condom use shared space with concerns of trans women, males who have sex with males (MSM), and female sex workers. Quite a cross-current of issues, but such a wide compass is what should be the essence of this grandiose expression ‘sexual and reproductive health and rights’. And the fear that this inclusivity is what will go missing in the Sustainable Development Goals (SDGs) was one of the highlights of the meeting – at least that was my takeaway (see inset and graphic for details of SDGs). 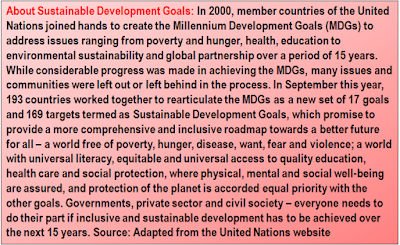 First, the concerns mentioned in the opening paragraph are often not recognized by many policymakers and other development stakeholders worldwide as part of the domain of sexual and reproductive health and rights (SRHR for short). Second, SRHR itself often gets poor attention in development planning and allocation of budgetary resources by governments. Even the SDGs seem to have fallen short in this regard – according to experts at the meeting, few targets under the broader goals explicitly relate to SRHR concerns.

Dr. Chinmoy Kr. Bose of FPAI, Kolkata Branch pinpointed key exclusions from the SDG framework. Shockingly, it doesn’t seem to include a commitment by governments to provide universal sexual and reproductive health services, including safe abortion services for girls and women. Neither does it talk about ensuring non-discrimination for lesbian, gay, bisexual, transgender and other queer people in the context of sexual health services, let alone recognize their reproductive health needs. As Pawan Dhall of Varta Trust pointed out, many trans women and MSM in India do get married and become parents. Similarly, Dr. Soma Roy, a researcher associated with Durbar Mahila Samanwaya Committee was apprehensive that the SRHR concerns of female sex workers would get short shrift in the SDG framework.

The speakers in the panel discussion hoped the efforts to achieve the SDGs would address a host of other equally pressing concerns as well. Shobha Shukla of CNS presented highlights of the Indian government’s commitments to meet the SDG targets. Dr. Baijayanti Baur, also of FPAI, flagged sexual violence within the family, while Dr. Dipanwita Hazari said a reality check was needed with regard to contraception and gynaecological problems – not just rural women but those in urban slums in Kolkata too were unable to talk about these issues readily with their husbands. Dr. P. K. Sarkar lamented that sex education was still a taboo in schools and colleges in India, and the SDGs couldn’t be achieved till this gap was plugged.

Ranjita Sinha of the Association of Transgender and Hijra in Bengal said without comprehensive data on the health and related needs of transgender persons, it would not be possible to ensure their well-being. Pawan Dhall added that just like trans women, MSM too were a poorly understood community. Not just what their socio-cultural profile was, but what factors made these communities especially vulnerable to HIV also needed to be understood. In 2013, National AIDS Control Organization data showed that HIV prevalence was 15 and 30 times higher among MSM and trans women, respectively, than in the general population in India. He contended that this was not just a matter of the degree of risk in the sexual acts practised by MSM and trans women. The pathways through which socio-economic exclusion and widespread gender-based violence lead to high levels of HIV prevalence among trans women and MSM must be mapped and factored in by the national HIV programme if India were to meet its HIV related targets under the SDGs.

SDGs 1, 3, 5, 10 and 16 talk about poverty reduction, health and well-being, gender equality reducing inequality and democratic governance, respectively. Given the exclusions and gaps discussed in the meeting, do we really see these goals being met by 2030? Perhaps consultations planned to review the monitoring and evaluation framework of the SDGs early next year would provide an opportunity to bring in the issues left out. If this doesn’t happen, it would be tragic because sustainable development is also inclusive development – it has to be about giving people – all people – the freedom to live lives they value.

Though born in industrial centre Asansol, Sarika Kar has spent more than a decade in Kolkata. A music buff and avid reader, socio-economic disparities motivated her to plan a career in social development work. She works with Anudip Foundation for Social Welfare on issues of livelihood for rural disadvantaged youth.
Posted by Varta at 23:46