I’m a writer and need help for an article on legal issues concerning lesbian, gay, bisexual and transgender people. I heard of an incident before 2009, that is, when the legal status of homosexuality was the same as today after the December 11, 2013 verdict of the Supreme Court of India on Section 377, Indian Penal Code. At that time, a young lesbian couple was dragged by their parents to a District Magistrate. The two women, both adults, were living in a flat, away from their parents, and both were pursuing respective jobs. Their parents took the help of cops to catch them and despite their unwillingness, the District Magistrate forced them to return to their parental homes.


Now my questions are as follows: What is the role of a District Magistrate? First of all, he knew that the women were adults and brought to him forcibly. So do his actions imply that they had really committed a crime? And even if their staying together was a crime, did he have the authority to take steps against them without sending them to court? After all, though a powerful man, he was neither a police officer nor a judge.

If the women still wanted to live together, ignoring the cops' threats, parents' tyranny and the District Magistrate’s order, what could they have done in this regard without breaking the law?

Also, suppose the women had charged their parents and police of wrongful restraint. Then the parents and police might have claimed that they were engaged in illegal sexual acts (as per Section 377). The women would then have been victimized because forensic medical tests might have shown that they were involved sexually. In such a circumstance, would the law have allowed them to leave their parental homes and live according to their own will?
Sayantan Maity, Kolkata 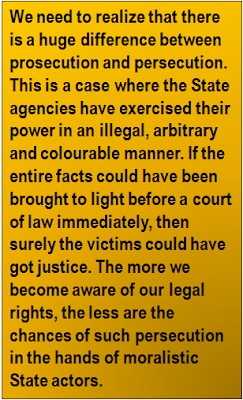 We need to realize that there is a huge difference between prosecution and persecution. This is a case where the State agencies have exercised their power in an illegal, arbitrary and colourable manner. If the entire facts could have been brought to light before a court of law immediately, then surely the victims could have got justice. The more we become aware of our legal rights, the less are the chances of such persecution in the hands of moralistic State actors.

Article 14 of the Constitution of India gives us the Fundamental Right to Equality and equal protection under the laws within the territory of India. Article 19(1)(g) confers the right to every citizen to reside and settle in any part of the territory of India. In the case at hand, since both women were adults, they had the right to reside in the same house of their choice without any disturbance from either the family or the law enforcing agencies.

Section 377 of the Indian Penal Code (IPC), 1860 comes into play, not in the case of sexual orientations, but only in relation to particular sexual acts, namely non penile-vaginal intercourse. The prosecution has to prove the alleged sexual acts in a court of law beyond reasonable doubt by adducing evidence. However, if someone makes an open admission regarding commission of such sexual acts, then the same may amount to extra judicial confession and can be used as evidence against the person in a trial.

The actions of the parents were offences under Sections 341 and 350 IPC (wrongful restraint and criminal force, respectively). They ought to have been proceeded against for commission of such offences.

The action of the police along with the District Magistrate as described was beyond jurisdiction and illegal. However, unless such illegal acts are brought to the notice of a High Court by filing a writ petition for protection of Fundamental Rights, no remedy can reach the victims. It is not always necessary that the victims themselves have to approach the court. Anyone on their behalf and/or any organization protecting human rights can approach the court. It is advised that the court be approached without any delay.

It is also important to mention here that the women were entitled to free and competent legal services before all courts within the territory of India. To avail the same they were required to approach the concerned District Legal Services Authority – every district court in West Bengal has the office of such an authority.

Kaushik Gupta is a lawyer by profession, a photographer by passion, and happy to answer your queries on legal matters around gender and sexuality. Write in your queries to vartablog@gmail.com, and they will be answered with due respect to confidentiality.
Posted by Varta at 23:01