Happenings, Nov '15 (update 1)
The 14th edition of the 'Kolkata Rainbow Pride Walk', the oldest of its kind in South Asia, is planned for December 13, 2015. Excerpts from a leaflet developed by the organizers of the walk shared here

The movement for equal rights for people of diverse genders, gender expressions and sexual identities has seen some very contrasting developments in the past couple of years in India. The historic judgment by the Delhi High Court on 2 July 2009 held that treating consensual sex of any kind, including homosexual sex, between adults as a crime is a violation of the Fundamental Rights protected by India's Constitution. The verdict resulted in the decriminalisation of homosexual acts involving consenting adults in the jurisdiction of the Delhi High court. This verdict was later overturned by the Supreme Court of India on 11 December 2013, with the Court holding that amending or repealing Section 377 should be a matter left to Parliament, not the judiciary. The legal battle for equal rights of all citizens immaterial to their sexual orientation or gender identity suffered a definite setback with the judgment. Nevertheless the voices against such discrimination became stronger than ever. The same apex court, in the National Legal Services Authority Vs. Union of India and Others case, delivered a landmark judgment affirming that the Fundamental Rights granted under the Constitution of India would be equally applicable to transgender people, and gave every citizen the right to self-identification of their gender as male, female or third gender. 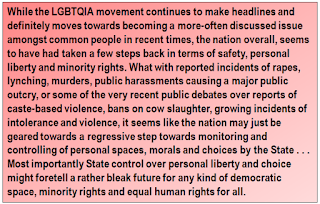 In April 2015, the Rajya Sabha passed the Rights of Transgender Persons Bill, 2014, moved by Tiruchi Shiva, calling for equal rights and reservations for transgender individuals and envisaging creation of a national commission and state level commissions for transgender communities. The Indian government is also reportedly preparing a bill to this end. Several other developments in 2015 were positive in advancing the cause of equal rights, including the formation of a Transgender Development Board in West Bengal. While the constitution of the board in West Bengal has seen controversies regarding representation from different sections of transgender communities, it has also been hailed as a positive step in the direction of recognition and protection of minority rights. It may be worthwhile to mention that such boards already existed in Maharashtra and Tamil Nadu.

While the LGBTQIA movement continues to make headlines and definitely moves towards becoming a more-often discussed issue amongst common people in recent times, the nation overall, seems to have had taken a few steps back in terms of safety, personal liberty and minority rights. What with reported incidents of rapes, lynching, murders, public harassment causing a major public outcry, or some of the very recent public debates over reports of caste-based violence, bans on cow slaughter, growing incidents of intolerance and violence, it seems like the nation may just be geared towards a regressive step towards monitoring and controlling of personal spaces, morals and choices by the State. Such a regressive stance, if taken, would definitely be a disgrace for any free democratic country and its citizens. Most importantly State control over personal liberty and choice might foretell a rather bleak future for any kind of democratic space, minority rights and equal human rights for all.

It is high time that we moved to dismantle the outdated patriarchal structures that perpetuate so much hate and exclusion, and put an end to the culture of discrimination and violence that it seems to perpetuate. It is time that we begin to respect and stand up for the individual’s freedom to choose a life of dignity, safety and respect. To love how and whom we wish. It is high time that we dismantled patriarchal gender and sexual norms or archaic and classist social systems to move towards a just social structure. It is high time that we strongly asserted that these archaic and exclusionary social norms cannot be used against anyone to deny them their basic freedoms and human rights or to perpetuate violence upon them.

What is the walk about? 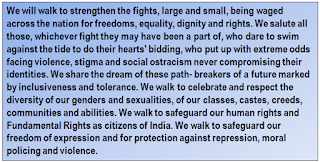 The '14th Kolkata Rainbow Pride Walk', the oldest queer pride walk of India and South Asia, intends to make a political statement for ‘equality, tolerance, love and solidarity’. We want to walk for strengthening the voices for equality for all – irrespective of gender, sexuality, age, occupation, caste, class, religion, race, language, disability or HIV status. We want to walk in solidarity with different rights-based movements – child rights, women’s rights, Dalit rights, rights of persons with disabilities, students groups and others. We vehemently protest the increasing atmosphere of moral policing and the restrictive approach of the establishment towards any ‘un-sanctioned’ behaviour. This moral policing is being increasingly used to stigmatize and discriminate against minority groups of all kinds.

We will walk to strengthen the fights, large and small, being waged across the nation for freedoms, equality, dignity and rights. We salute all those, whichever fight they may have been a part of, who dare to swim against the tide to do their hearts' bidding, who put up with extreme odds facing violence, stigma and social ostracism never compromising their identities. We share the dream of these path- breakers of a future marked by inclusiveness and tolerance. We walk to celebrate and respect the diversity of our genders and sexualities, of our creeds, communities and abilities. We walk to safeguard our human rights and Fundamental Rights as citizens of India. We walk to safeguard our freedom of expression and for protection against repression, moral policing and violence.

We walk in protest, in solidarity, in celebration and with faith in humanity!

We invite all free-thinking individuals, groups and entities to join us for 'Kolkata Rainbow Pride Walk 2015'. Let us stand in solidarity against discrimination, exclusion and violence!

Please note: 'Kolkata Rainbow Pride Walk' follows a ‘no organizational banners/logos/advertisements’ policy. Everyone walks with a common banner. But do bring as many creative posters and slogans as you can! You can also participate in a poster-making workshop a week ahead of the walk.

Route: Shyambazar, on to Khanna, Maniktala, Rajabazar, Sealdah, with end point at Moulali Ramlila Maidan. There will be a short public meeting and cultural performances at the end point.