Insight, From the Archives, Apr '16
Sayan Bhattacharya comes across ‘marriage of convenience’ as an issue reflected in the Counsel Club archives and wonders what such arrangements mean for ‘queerness’, ‘desire’ and ‘identity’. These series of articles intend to create an archive of the queer movement in Bengal and India – not a chronological narrative of the movement, rather anecdotal histories capturing the little voices that are often lost in general historical accounts – voices from thousands of letters received by Counsel Club, one of India’s earliest queer support groups (1993 to 2002), and from the group’s house journal Naya Pravartak.


A recent campaign called ‘Come Out Loud’ has been documenting queer narratives across India to forcefully challenge the ‘minuscule minority’ claim made by the Supreme Court of India in its verdict on Section 377, Indian Penal Code in December 2013. Stories of varying degrees of struggle with a hetero-normative economy and violent institutions like the education system, workspace and the family – to establish one’s sense of self, to live on one’s own terms. Perhaps these stories can be an inspiration for those who are discovering their selves or who are struggling with similar situations. Moreover, to be able to say that we are a large number of people and there is no way that the State can deny us our rights, might serve on a strategic level.


However, such a method of mobilization is problematic to me on two levels. First, if we go by our Constitution (or the sense of constitutional morality invoked in the Delhi High Court judgment on Section 377 in 2009), every citizen of the country is supposed to be equal. Their numbers cannot be a criterion to determine their rights. In other words, even if there is a single queer individual in the country, she will still be a rights-bearing citizen. So then, doesn’t this effort at proving numerical strength a turn away from constitutional values?

This is a complex question and merits another article but this current piece is concerned more with the second problematic. Do the ‘Come Out Loud’ videos essentially about surmounting all challenges to proudly proclaim oneself as LGBTIQ not set up a hierarchy on the basis of those who can come out and those who can’t? Is coming out a once and for all process? Don’t some of us come out strategically at some spaces and not at others? Isn’t this idea of coming out utterly irrelevant for many gender non-conforming people whose bodies and gestures already fail to fit the hetero-normative mould and hence there is no closet for them? How do our caste and class positions inform this so called coming out process?

Finally, when indeed someone comes out as gay, lesbian, bisexual or gender non-conforming, isn’t that person expected to live a certain way? Say, for example, the gay man must have partners of the same gender. The gender non-conforming one will always have to have some marker on hir body to prove hir gender variance and so on. In other words, doesn’t coming out stamp a mark of authenticity on your way of living?

We shall return to this question of authenticity soon but let us pause at this point and turn towards the Counsel Club archives. A letter from September 1996 has an Indian researcher working in USA, who identifies himself as gay and signs off as Deepak, PhD (name changed), write: “I am seeking a bisex / lesbian partner to work towards a marriage of convenience. I have put an ad in some of the local papers and is still awaiting response . . . Have you seen any ad of this kind (gay / bisex male seeking lesbian) in the past?” Deepak continues to say that he will shortly arrive in Bombay for his wedding and he wants to marry a queer woman.

Or sample this advertisement in the May-December 1995 issue of Naya Pravartak: “31-year old handsome guy from Assam seeks friendship with young gay men. Also open to a relationship with a lesbian . . .” There are other letters and writings too in the Counsel Club archives that talk about similar marriages or relationships. 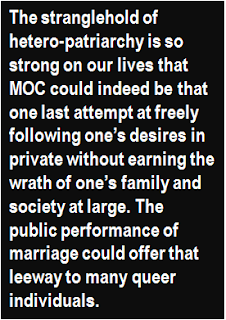 A marriage of convenience (MOC) allows both parties to have the freedom to lead their respective lives while maintaining the façade of marriage for society and family. Sometimes these marriages could also take place for acquiring a green card or for financial benefits, but in the case of the Counsel Club archives, the issue seems to have been more about marriage giving the sanction for one’s non-normative desires. It is but obvious that the very term MOC has a derogatory connote and is frowned upon. So let us first rehearse the arguments against such marriages.

MOC is often looked upon as a compromise on one’s life, a desperate surrender under family pressure. It is seen as a betrayal of one’s desires. In fact, often NGOs receive phone calls from queer men wishing to meet queer women for marriage. Their calls are not encouraged. They are told that this is not the ‘right’ way to live life. Queer women who want such marriages too are castigated by these NGOs. Yet, more than we like to acknowledge, a lot of queer people do explore the idea of MOC. I have been privy to several such conversations in queer circles where a lesbian and a gay man, who are also very close friends, have explored the idea of marriage. So then, is it possible to read these letters and advertisements in a way that takes cognizance of such commonplace desires? How do we read such an archive of emotions that involves both criticality and empathy?

The stranglehold of hetero-patriarchy is so strong on our lives that MOC could indeed be that one last attempt at freely following one’s desires in private without earning the wrath of one’s family and society at large. The public performance of marriage could offer that leeway to many queer individuals. Yet, how many MOCs have actually taken place? In the absence of any study, it is anybody’s guess.

However, what is indeed obvious is that a lot of gay men do end up marrying heterosexual women and the same goes for queer women. Keeping that in relief, isn’t MOC a better idea at creating an equitable space within an institution which is intrinsically violent? At least, in such a marriage there is absolute transparency between the two parties about how they would like to transact their respective desires. In fact, the idea of the MOC comes from the desire to continue to follow one’s intimate desires. This is not really to advocate MOC or to extol its virtues. It is to try and understand what could motivate two individuals to contemplate such an arrangement. 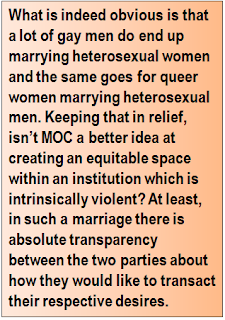 We are all implicated within different power structures and we try to negotiate with them, we try to subvert them in different ways. These negotiations could depend on our socio-cultural and economic settings too. Are there some pre-ordained and ideal ways to negotiate systems such that any departure from them marks one as inauthentic? This brings us back to ‘loud’ coming out campaigns. In this time and age of ‘NGOised’ movements, are we in a hurry to circumscribe the meanings of identities and what all they can or can’t do? If that be the case, where do we fit in the grey zones in such a scheme?

One may ask where is the grey zone in an MOC? Where could be the ambiguous area in what is essentially a compromise? That brings me to the idea of friendship. We talk so much about ideological wars between various sexual and gender minorities, but do we talk enough about friendships across sexualities and genders? Friendships that often survive bitter organizational rivalries or ideological differences? Say, friendships between gay men and lesbian women? Friendships between trans men and trans women?

In today’s turf wars among NGOs (where identities are seen as territories that need to be fiercely defended and any attempt at trying to work across them are seen as sinister designs at expansion of territories), isn’t such a friendship a radical attempt that blurs how we understand our selves and desires? Who is to say what the limits to such friendships are? Mutual understanding, dependence, love, even romance . . . are there any limits really?

It isn’t necessary that an MOC can engender such feelings but is it necessary that an MOC can’t engender any kind of attachment between two marginalized individuals? I can totally imagine some NGOs interjecting, “If there is any romance between a gay man and a lesbian, they must be bisexual!” Perhaps, that’s what the NGOs are hardwired to do, to reduce ways of being into neat definitions. But why can’t one be many things at the same time?

Perhaps too politically incorrect? On my part, I hope Deepak succeeded because I didn’t find another letter from him in the Counsel Club archives. That could be because Counsel Club didn’t know how or whom to connect Deepak to (his letter was replied to but there is no copy of the response available). But it could also be because of disappointment at being scoffed at by lesbian and gay communities at large.

Sayan Bhattacharya is currently enjoying himself outside of any institutional space, but he is happy and sad to report he is returning to the university in three months for a PhD. Meanwhile, he continues to work as a freelance journalist and research consultant. He can be reached at sayanb360@gmail.com.