Star quest: Fighter with a heart


Star Quest is a series of photo-stories of individuals who may not be public figures like politicians, artistes, social activists or media persons, but have in their own way contributed to social equity and empowerment around gender, sexuality and related issues. 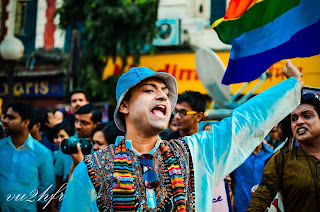 Star of the month: Anurag Maitrayee, 31, resident of Kolkata. She identifies herself as a trans woman and strives to make a change through her art commune Muhurto. She has faced severe transphobia and yet doesn’t believe in labelling people as ‘transphobic’ or ‘homophobic’ and pushing them away. She believes there is goodness in everyone and wishes to embrace everyone and move forward.

The term muhurto translates as ‘a moment’. Muhurto, through their plays, intend to bring forth stories from the margins to the centre of collective consciousness. They have staged a few plays in the recent past like Akash (first staged in 2014), which is about a journey towards change – a change of heart. It is the story of the transformation of a homophobic person and their friendship with a queer person. 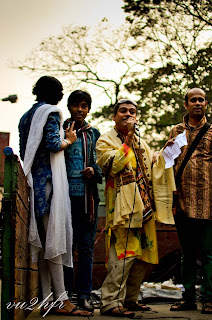 Anurag Maitrayee wasn’t always vocal about her needs. There was a time when she had to struggle hard to be heard, to be herself. She says that institutions that confine people still give some visibility to the inhabitants’ pain, but people on the margins are denied even that. Society doesn’t grant the wishes of people who crave for things different from the already ‘assigned list of wishes’. She believes that every voice matters. She doesn’t like to discriminate between the struggles of a transgender queer person and those of a cisgender queer person. She believes that every struggle is important and thus every fight for existence must be respected.

She recalls how as a teenager she was attracted to a particular boy but could never express herself. She had to hide her feelings and that is the earliest she remembers of being in ‘solitary confinement’. Her parents, after she came out to them, took time but came around to accept her. Sadly, she lost them both very recently, but to her surprise she was accepted as a part of the family of her best friend. She feels at home with her friend’s parents. This makes her question society’s emphasis on stereotypical notions of family. 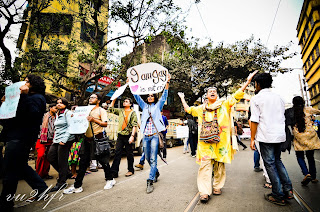 In September 2015, Anurag Maitrayee went through another challenging experience. She still remembers vividly what a dark night it was. Amid the Durga Puja fervour she was out with some friends in the evening, travelling by the Kolkata Metro. As she and her friends boarded the train at Shyambazar, a bunch of goons made a pass at them. They protested, and the nuisance stopped – or so they thought. Later, when they got off at Jatin Das Park station to go to Maddox Square, the goons followed and attacked them in full public view on Hazra Road. They reported the goons to police officials present nearby, but the police merely rebuked the criminals with a fatherly empathy.

The police then misinformed Anurag Maitrayee about the police jurisdiction of the site where the attack took place. They asked her to file a complaint at Bhowanipur Police Station, whereas she should have been guided to Tollygunge Police Station. At Bhowanipur Police Station, the designated duty officer that night kept her waiting without taking a note of her plea. Ultimately, he ordered a police van to take her and her friends to Tollygunge Police Station. Exhausted, when they finally reached the right police station, the Officer-in-Charge (OC), instead of helping them, showered them with extreme verbal abuse. 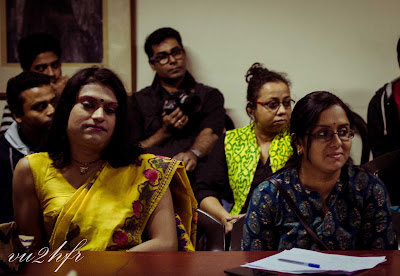 The OC demanded to see signs of physical violence and refused to register an FIR. He repeatedly asked for marks of blood on the complainants’ bodies. Anurag Maitrayee found it amusing how physical marks became a validation for violence. Even after a lot of requests, when the OC refused to register an FIR, Anurag Maitrayee had to resort to speaking in English. This worked like a miracle! Her FIR was finally recorded, but by this time it was already midnight. The police failed to provide her and her friends any transport home, and it was an old cabbie who came to their rescue and helped them immensely.

The incident left a deep wound on Anurag Maitrayee’s mind – she went into a phase of post-traumatic stress disorder and was unable to use the metro railway for several days to come. It was with the help of her newfound family that she could finally recover. In the meantime, Ardhek Akash, a journal focussed on fighting gender-based discrimination, and Chandak Chatterjee of Presidency University stepped in to help her. Messages put up by them on social media helped mobilize a big protest outside Bhowanipur Police Station. Several civil society groups like Das Theke Das Hajar, Durbar Mahila Samanwaya Committee, Kolkata Rista, Prantakatha, Pratyay Gender Trust, Samabhabana, Sappho for Equality and Swikriti came together for the protest. 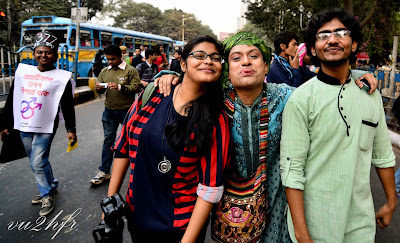 Eventually, the higher echelons of Kolkata Police were forced to take action against the police officials who failed to perform their duties. After a deputation meeting with Murali Dhar, Deputy Commissioner of Police, South Division, it was decided that the culprits would meet with exemplary punishment. After a second deputation from Das Theke Das Hajar, the OC of Tollygunge Police Station was demoted, two other police officials had their payments stopped, and another two were suspended for two months. But the goons who harassed Anurag Maitrayee and her friends last September remained unapprehended.

The ‘mainstream’ media did no better than to exoticize the developments and paint them as something of concern only to queer people. Anurag Maitrayee, with help from her friend Mitali, wrote to Ei Samay newspaper to point out that the protests against the police were not just a struggle for queer rights, but a larger movement for freedom of expression.

Anurag Maitrayee believes that the queer movement should transform into a mass movement because laws like Section 377 of the Indian Penal Code affect everyone’s lives. As an artist, she remains committed to the belief that art is the biggest form of protest.

Kaustav Manna, a graduate in psychology, is a photography enthusiast and freelance writer.
Posted by Varta at 02:51