“Ma, are there only two kinds of human beings – male and female and no more?” This was the question my daughter Suchetana asked me 14 years ago when she was four. As usual, I pretended to be busy (which I often did whenever she asked me difficult questions) and told her I would explain later.

I had to take help of mythology when I came back to her with explanations – since story telling was part of my daily routine when I was with her, I started telling stories from Mahabharata – so Shikhandi’s story was told and retold a number of times, as also those of Brihannala and Iravan. But I distinctly remember Shikhandi was a favourite with both of us.

A couple of times I wondered why she asked this question – she was exposed to different kinds of people from early childhood as she had to accompany me to meetings, workshops as well as protest meets, as there were days I didn’t have anyone with whom I could leave her at home. So she met persons with disabilities and members of women’s rights groups (no, we didn’t say gender rights in those days but said women’s rights). Was it because she saw and met members of Sappho regularly around that time?

Incidentally, when I met a few members of Sappho, Kolkata’s first lesbian and bisexual women’s support group, they said they were looking for a room which they could use for their meetings as they did not have resources for a full-fledged office. I offered them one room of my house, which was lying vacant then. I mentioned the conversation with my daughter to my friends in Sappho, and in one of our informal gatherings we discussed at length whether mythology was a good way to explain gender roles and fluidity to children.

I recall that about 15 years ago it was not so easy to talk about diverse sexual orientations and gender identities as it is today. It was only my husband and I who knew about Sappho’s work. I told my in-laws tactfully that it was an all women’s group who would be using the room for their work – well, I was truthful, after all. I gave similar answers to all the neighbours – not just neighbours, even the local shopkeepers repeatedly asked me who came to our house and for what purpose.

Would the answer be any different if I was asked similar questions today? How much has time changed? How much has our vocabulary on gender and sexuality changed in the past 15 years or so? I know these issues are discussed much more now; the media also gives more space to these issues but somewhere there is alienation when it comes to languages other than English. Even in the context of English, speaking about gender and sexuality to adults is likely to be easier, but till date I lack the skills if children ask about similar issues. 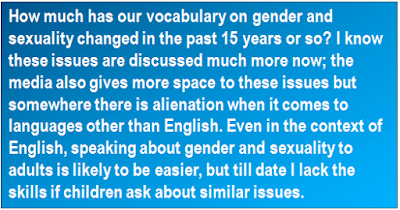 I realised this when last year I attended the ‘Kolkata Rainbow Pride Walk’ for the first time. As I entered the park where the walk was supposed to end, I saw several children playing around. A few of them asked me what the procession was about and once again I fumbled for words – how to explain ‘rainbow pride’ to the children? I didn’t have enough vocabulary in their language or the expertise to clarify diversity that ‘rainbow pride’ was made of.

While carrying out a needs assessment on sexuality education for children with developmental disabilities, the principal of a special school told me that she found it difficult these days to explain the concepts of ‘boy’ and ‘girl’ to her students. I wasn’t surprised. She said, “Previously, we used to show a doll in a dress with long hair and said this was a girl, but now with the whole concept of cross-dressing and gender-fluidity coming up, we don’t know how to explain these concepts to our children.”

She added that previously teaching young adults with intellectual disabilities how to prevent ‘sexual abuse’ meant saying “Don’t let people of the other sex touch your private parts”. Now with so much more openness about same-sex relationships, this concept too should be reframed. But when she asked me for suggestions, I had none – because we haven’t developed a simple vocabulary that can be used to explain queer issues to our children.

Every single time I plan sexuality education sessions for persons with developmental disabilities I find this gap increasing. Today, how can I take sessions on gender and sexuality without talking about queer issues? 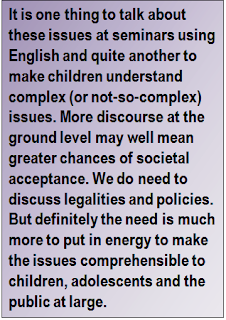 It is also important to be alert about how children receive totally different views on gender and sexuality from different sources and it confuses them more. For example, when my nephew was a student in the sixth standard in one of the most reputed schools in Kolkata, he came and told us that a cuss word used by some of his friends was ‘gay’. It was an all-boys school and when a gang of boys wanted to tease a particular child, it was usual to call him ‘gay’. My nephew thought it must be the ultimate bad thing to be gay. This was in the ‘90s and he was not aware what this particular word meant. When he asked his family, his mother felt too shy to answer. So he came to me. My explanation that being gay was nothing bad didn’t satisfy him. It was difficult for him to disbelieve his peer group, his friends.

Lack of books, comics and films on queer issues also makes things more difficult. Somewhere we need to understand that the more invisible this issue becomes, the more complex it is for a child to understand the issue of gender and sexuality diversity.

It is one thing to talk about these issues at seminars using English and quite another to make children understand complex (or not-so-complex) issues. More discourse at the ground level may well mean greater chances of societal acceptance. We do need to discuss legalities and policies. But definitely the need is much more to put in energy to make the issues comprehensible to children, adolescents and the public at large.

Shampa Sengupta is a Kolkata-based activist working on gender and disability issues for more than 25 years. She is the founder of an advocacy group called Sruti Disability Rights Centre and is Executive Committee Member, National Platform for Rights of the Disabled.