Vigils for trust and kindness

I had forgotten many details of this family story from the time of India’s partition in 1947 – till a cousin sister recounted it recently. My late father, then all of 19 and unmarried, along with his younger brother and parents, lived in Shorkot town in the Punjab now in Pakistan. A time came when they had to leave home in a rush and take refuge in a camp within the town. Only to realize that they had left behind some valuables, which would have proved more than handy if and when they crossed the border.

My grandfather was a teacher and two of his students played significant roles in this story, which may be of some value even in today’s circumstances. Both turned up at the refugee camp to offer help. One of the students was Muslim, the other Hindu (their names now long forgotten). When the Muslim student came to know about the dilemma around the valuables left behind, he assured my grandparents and escorted my father home from the camp to collect the valuables.

My father often said that the moments he spent in the deserted house collecting the valuables were possibly the most sinister and nerve-wracking ever. An oppressive silence, neighbours staring at him, suspicions about his escort’s intentions . . . nevertheless he was back in the camp with both life and valuables intact. The student refused to accept anything even as a token of gratitude, paid respect to his teacher and left.

Soon, a second dilemma offered itself. Now that many people knew about the existence of the valuables, what if they were robbed during the journey to India? Worse, what if they became reason for the family to be hurt or even killed? At this stage, the second student, who was from a well-to-do family better placed than my father’s in terms of security, happened to visit the camp. It was decided that the valuables should be handed over to him and once his family too had crossed the border, both sides would try to establish contact and the valuables returned to their owners. Niggling doubts about whether this would really happen were quelled as there was little choice and somewhere there was a kernel of expectation from a fellow religionist.

Eventually, after more halts at refugee camps, road and train journeys, my father and others reached Amritsar in India. My aunt, my father’s younger sister (and my cousin sister’s mother), married and settled in Delhi before partition, met them on arrival and was aghast to see them just about able to stand on their feet. After some time, when immediate matters had been dealt with (my father settled in Gohana, now in Haryana), it was decided to see if the valuables could be retrieved. Till then there was no communication received from my grandfather’s student. 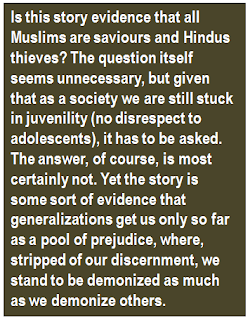 My aunt’s husband, a gentle but firmly persuasive man to say the least, through his contacts and records of refugees, finally did track down the student’s family. But he was in for a shock when the student flatly denied having taken custody of the valuables. Not one to give up, my uncle got a government official to put pressure till the student agreed to return the valuables. It’s another matter that later my grandmother discovered that some of the valuables were missing.

I’m mesmerized by the story every time I hear it (after all it has a close connection with my existence and my being able to write this today). But I was not aware about the role played by the students till recently, and that seems to be of significance today. This is a story of trust and distrust – implicit distrust in the ‘other’ and trust in ‘our own’.

Is this story evidence that all Muslims are saviours and Hindus thieves? The question itself seems unnecessary, but given that as a society we are still stuck in juvenility (no disrespect to adolescents), it has to be asked. The answer, of course, is most certainly not. Yet the story is some sort of evidence that generalizations get us only so far as a pool of prejudice, where, stripped of our discernment, we stand to be demonized as much as we demonize others.

‘Fiberal’, ‘sickular’ and ‘infidel’ are the chants I can visualize as I write this. But I must refuse to believe and do what fundamentalists, irrespective of hue and denomination, would have us believe and do. The inherent limitations of holy books, epics and social systems, and the shortsightedness of those who propound or pound them for their own narrow ends hold no fascination for me. Not beyond literary curiosity, never to the extent of castigating entire communities.

One can argue that fundamentalists are not born in or off a vacuum; that their genesis is in us as a society, community or even individuals. So can any one of us truly claim to be on higher ground? Most likely not, and that’s all the more reason we need to introspect our actions, even the well-intentioned ones. I say we need candlelight vigils not so much for the Orlando’s of our lives, but for the little acts of enlightened self-interest (also known as kindness) – the kind that helps people cross borders.

Pawan Dhall aspires to be a rainbow journalist and believes in taking a stand, even if it’s on the fence – the view is better from there!
Posted by Varta at 17:26