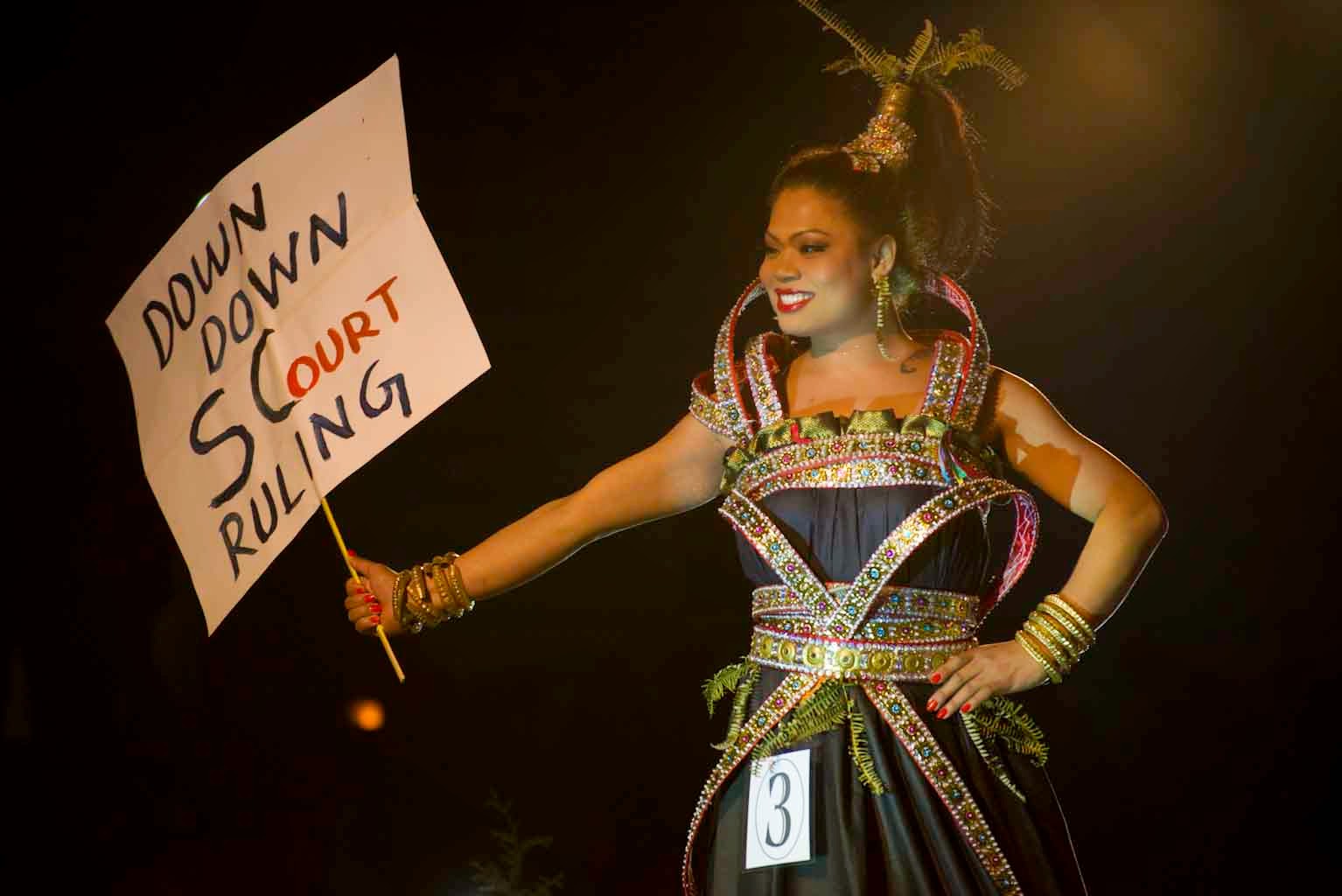 Imphal, December 14, 2013: “We don’t want to go back to 1860”, “Down down Supreme Court ruling”, “We want freedom of choice”, “Legalize love” and “Two of a kind make a beautiful pair” – these were some of the witty and hard-hitting placards carried by participants at the third edition of the ‘Trans Queen Contest North-East 2013’ held at the Bhagyachandra Open Air Theatre in Imphal yesterday. The event was organized by the All Manipur Nupi Maanbi Association (AMaNA), a coalition of community-based organizations that work on health, development and human rights of male-to-female transgender people or trans women and males who have sex with males in Manipur.

The placards were a spontaneous show of protest against the Supreme Court verdict that overturned the Delhi High Court ruling on Section 377, Indian Penal Code and recriminalized same-sex sexual relations. When the verdict was announced on December 11, just two days before the event, the organizers struck upon a novel way to register protest against a ruling that angered not just lesbian, gay, bisexual, transgender and other queer people across India, but also their allies. The creative round of the beauty contest, meant to display off-beat and even zany innovations in dress design, was modified to include a display of placards with pithy slogans, and easily became the most creative aspect of the event. All thoughts of beauty contests as regressive and against feminist principles were laid aside, at least for a while. 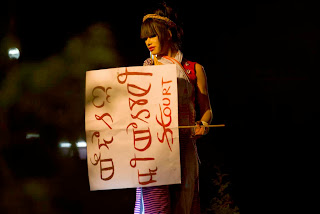 Cheered on by a vociferous and appreciative crowd of nearly 700 across the age and gender spectrum, 31 trans women from different districts of Manipur, Arunachal Pradesh and Meghalaya walked the ramp in a colourful display of traditional, contemporary and fusion dresses. Ten participants were short listed for the final question and answer round by a jury consisting of filmmaker Romi Meetie, educationist Konika Devi, journalist Erengbam Arun and professor in Manipuri studies Dr. Vijayalakshmi Brar. The winners were Beoncy Laishram, a medical student, Nippon Rajkumari, a fashion designer, and Khaidem Sunder, a beautician – in that order and all three from Manipur.

In her welcome address, Thangjam Santa Khurai, Secretary, AMaNA said, “I am sorry for the Supreme Court verdict, but how long will we keep saying sorry? The government should stop criminalizing us!” Several other special invitees joined her in expressing disappointment at the verdict and promised support for AMaNA and its cause. Chief among them were A. Guneshwar Sharma, District and Sessions Judge, Imphal (East) and Abhiram Mongjam, Joint Director – Targeted Interventions, Manipur State AIDS Control Society. A. Guneshwar Sharma, a well-wisher of AMaNA’s work since his days as Member Secretary, Manipur State Legal Services Authority, said: “Lesbian, gay, bisexual and transgender people should have equal rights and be treated as equal citizens.” Earlier, the organizers involved the entire audience in an inspiring candlelight protest against the Supreme Court verdict.

The event was supported by AMaNA’s technical partners and donors Manipur State AIDS Control Society, American Jewish World Service and Solidarity and Action Against The HIV Infection in India (SAATHII). Sanamacha, key anchor for the event and associated professionally with Maruploi Foundation, a member agency of AMaNA, said: “The event has become an important and popular solidarity event for the transgender community of North-Eastern India”. The vocal crowd at the venue seemed to bear her words out.

Most of the contestants in the event were involved in high school or college studies, music, dance, social work and fashion, and some worked as beauticians. Many had designed their own dresses. What was missing was a word of consolation or support from the anchors for the contestants who stumbled or suffered stage fright.

Pawan Dhall aspires to be a rainbow journalist and believes in taking a stand, even if it’s on the fence – the view is better from there!
Posted by Varta at 01:45