Insight, May '14
By Pawan Dhall

Lesbian, gay, bisexual, transgender (LGBT) or queer communities in India have long had a love-hate relationship with the media. The anguish at not being written about accurately and sensitively, the sense of being let down at the queer diversity not being represented adequately, is often coupled with the appreciation that the media has indeed helped in mobilizing queer communities and advocating their concerns with the public at large and the powers that be.


In the pre-Internet days, particularly the 1990s, it was thanks to newspaper and magazine stories and the occasional television programme that contact information of queer support groups would reach thousands of hidden and isolated queer individuals and open up a new world for them. But was this process of liberation and enrichment one-way? Did it also impact the people behind the bylines that headed stories on queer people?

Kolkata-based Ranjita Biswas, Editor, Trans World Features, has been writing about queer issues for more than 20 years: “At first when I started out, I needed to understand the issues, and the inherent challenges – especially in a less-than-open society as in India. So I familiarized myself by reading about LGBT issues. As I began participating in events, meetings and conventions around these issues, information collection became easier. I met people working on LGBT issues, activists, healthcare experts and members of the marginalized communities who told their own stories. Engaging in conversation with them has been one of the most enriching experiences as a writer.”

Sandip Roy, longtime Editor of Trikone Magazine and now Senior Editor with Firstpost, has seen both sides of the coin. He first started writing on queer issues in the early 1990s as a volunteer with USA-based Trikone, which started in 1986 and is the world’s oldest surviving South Asian queer support initiative. He lived in USA then. In 2001, he became a full-time journalist and is now based in Kolkata. Queer issues are not his only beat, but his involvement in queer activism gives him a rare insider’s perspective.

Recounting the early years of the queer scene in India (the start of 1990s), Sandip Roy says, “I think the challenge in the early days was finding enough people who were willing to be quoted for stories. To be photographed was another major challenge.” But on the current scenario, he says: “I think it's amazing how far we have come. The initial stories were all about introducing the subject to a mainstream and clueless audience. Now we have far more sophisticated takes. The work groups like Voices Against 377 and others have done is responsible for really educating the media, especially the English media. I hope similar work happens with vernacular media . . . [queer] groups should take it upon themselves to educate newspapers and reporters if they feel a story stereotypes too much, uses incorrect terminology and not assume homophobia when it could be homo-ignorance.”

Queer visibility has come a long way indeed. For journalists who started writing about queer communities in recent years, the situation is dramatically different. Amartya Mukherjee, Senior Correspondent with Kolkata-based Bengali daily Ei Samay, a Times of India Group publication, started writing about queer issues only in September 2012. Since then LGBT issues have become an integral part of his beat and he feels thankful that his employers encouraged him to cover these issues. He finds queer communities in Kolkata well-informed, articulate and quite forthcoming. He remarks, “Right after the Supreme Court verdict on Section 377, Indian Penal Code on December 11, 2013, I interviewed a queer couple in Kolkata. In spite of the negative verdict, they were surprisingly open about their lives. The interview was one of the best in my career of six years as a journalist.”

Esha Roy, Special Correspondent with The Indian Express based in Imphal, echoes Amartya Mukherjee. Her first story on queer issues was written as a trainee with The Indian Express in Delhi in 2001. This was the year Naz Foundation (India) Trust filed the public interest litigation against Section 377 in Delhi High Court, which after more than a decade culminated in the December 2013 Supreme Court verdict. Thereafter she did not pick up the subject till 2011 when she was posted in Manipur and covered a beauty pageant organized by queer support groups in the state. A relatively high degree of social acceptance for male-to-female transgender people or trans women in the state (compared to northern India) struck her as unique. She decided to write more often on the subject and received full support from her editorial team. 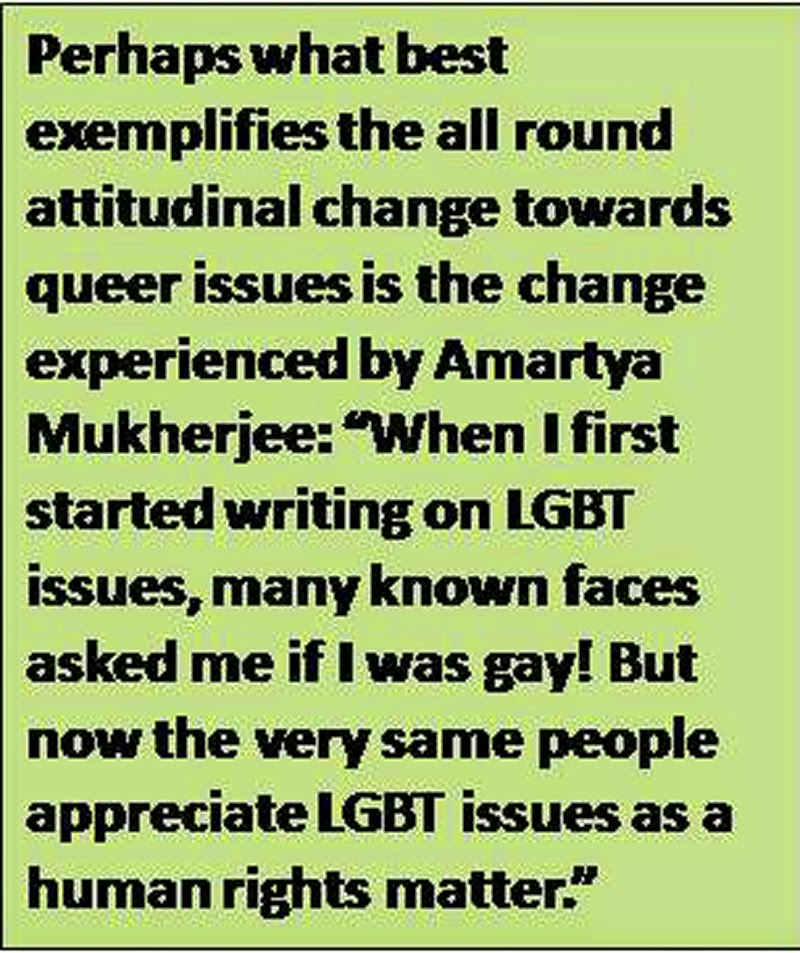 Perhaps what best exemplifies the all round attitudinal change towards queer issues is the change experienced by Amartya Mukherjee: “When I first started writing on LGBT issues, many known faces asked me if I was gay! But now the very same people appreciate LGBT issues as a human rights matter.” He credits this quick turnaround in just a couple of years to constant media coverage and ironically the Supreme Court verdict on Section 377, which apart from its regressive impact of criminalizing queer people, also conveys the fact that Section 377 is not just a ‘gay sex law’ but something that impacts every sexually active adult in India who has dared to venture off the ‘straight’ path of penile-vaginal sex.

On the issue of maintaining objectivity while reporting on queer issues, Sandip Roy says he never experienced any personal conflict. He remembers the San Francisco Chronicle having removed a lesbian reporter from the LGBT beat, concerned that her coverage of same-sex marriage when it first happened in San Francisco would not be objective. “But the newspaper got a lot of flak for that. After all they would not remove a Latino from covering Latino issues and would in fact think they might bring more insight to the subject.” Amartya Mukherjee agrees: “I have had no internal conflict in writing about LGBT issues with any personal beliefs or preferences around sexuality. I can be supportive or critical of the LGBT movement depending on the issues at hand.”

In terms of critiquing the queer movement, Ranjita Biswas is unabashed about pointing out that lesbian visibility needs to improve: “One complaint I have heard from lesbian groups, in India and elsewhere, is that even within the LGBT community, they get sidelined or their particular problems which are to do with gender are not given proper attention. Perhaps there is scope for more discussion on this matter within the community for better cooperation among the groups.”

Critiques apart, there seems to be plenty happening to keep journalists on the LGBT beat busy. Not just the Supreme Court pronouncements, but gaining deeper insight into queer lives and histories as well. Esha Roy, for instance, is fascinated by the cultural and religious angle to the acknowledgement, if not outright acceptance, of trans women in Manipur and plans to research the history behind this phenomenon. Kudos to her because any such effort involving North-East India will help to throw light on the rich heritage of a poorly understood region of the country, which, however has one thing in common with the rest of India – the gradual disappearance of traditional forms of acceptance for gender and sexuality diversity. Journalistic efforts to document these histories must be welcomed and supported by queer communities.

Clearly, leads for journalists on the queer trail are not going to dry up any time soon, and the queer movement will have its hands full not just tackling homophobia and homo-ignorance in the media, but also genuine desire to learn and report on the hard facts and insight – whether it is to do with violence against queer people, high prevalence of suicides among them, legal reform battles or historical narratives of queerness in India.

Email ThisBlogThis!Share to TwitterShare to FacebookShare to Pinterest
Labels: Insight