From the Archives, May '14
Sayan Bhattacharya delves into the Counsel Club archives and discovers a transgressive world of desire at a time when queer visibility in India was still in a nascent stage. These series of articles intend to create an archive of the queer movement in Bengal and India – not a chronological narrative of the movement, rather anecdotal histories capturing the little voices that are often lost in general historical accounts – voices from thousands of letters received by Counsel Club, one of India’s earliest queer support groups (1993 to 2002), and from the group’s house journal Naya Pravartak.

It was a few months back, just after a Supreme Court verdict recriminalized ‘carnal intercourse against the order of nature’ (under Section 377 of the Indian Penal Code), that a friend introduced me to a unit member of the Satyamev Jayate TV programme, the second season of which is currently on air. Aamir Khan is of course back as the Indian Oprah Winfrey. I was told that they would dedicate one episode to non-normative sexualities. So they would need interviews. I introduced him to two of my transgender friends. This person also asked me whether I could speak on camera. However, his next question was whether I have a partner. I was immediately disqualified. My transgender friends were disqualified too!

We were told that the struggles of homosexuals get more authenticity when you are with someone. Now wait! This is not an isolated instance of the media trying to paint an issue with broad brushstrokes. Within the queer communities as well, the dominating discourse has revolved around love, how same-sex love is same as any other love! Just do a mental count of the number of times you have seen or heard the slogan "Love is not a crime!" or the number of interviews of gay and lesbian couples you have read or heard post the Supreme Court judgment and you will get that Aamir Khan is no exception.

While this approach maybe pragmatic as it helps bridging gaps with a large mass of people who still think of homosexuals as some freaks of nature needing ‘help’, it actually leaves unquestioned the embedded structures that create the ‘other’, the ‘different’ and the ‘deviant’. Secondly, each time we speak of love and only love, do we also not run the danger of conflating desire with love? Is it the desire for coupledom or the desire for sex or a sexual encounter that helps one discover one’s sexuality? So then, where exactly does the transgression begin – with the sexual act or with the love?

One might argue that there can be no neat divide between the two. True that but then talking of love and then depicting it as only coupledom is basically privileging the inclusion, normalization and multiplication of certain bodies (namely same-sex couples) at the cost of excluding those who choose to stay outside the ambit of coupledom on one hand, and the complete invisibilization of the sexual act which has been deemed ‘criminal’ by the state, on the other.

So within such a paradigm, place this little personal advertisement in the August ’97 to May ’98 issue of Naya Pravartak: “Passive, non-hairy, circumcised 36 year old post-graduate craving for muscular males for close intimacy. All welcome without restrictions…”, and then this one from the July-December ’96 issue: “I like wearing sarees and ornaments. Seeking good understanding male friends / partner for everlasting ‘freestyle’ friendship. Write with photo to…” and so on. Plain and simple desire, sexual desire. How does one engage with them in a ‘love is not a crime’ world?

While going through these advertisements, what struck me most was not the fact that here were queer men and women trying to seek out other queer men and women but the striking display of agency by them in articulating their desires. For this was more than a decade before 2009 when the Delhi High Court read down Section 377 and the visibility of the queer community doubled manifold, at least in the cities. This was much before the Internet and mobile phone boom. Mobile phones and the Internet have completely transfigured the notions of the public and the private. The proliferating dating sites assuring anonymity have made it all the more easier to access information about sex and sexuality, to be oneself under the cloak of someone else in public. Mobile phones on every hand assure one a world of one’s own.

All these private bubbles float in a gigantic public. Think of the number of people who came on the streets objecting to the Supreme Court verdict that reversed the Delhi High Court ruling and reinstated Section 377 in 2013, the number of queer men and women who ‘came out’ on social networking sites or the number of people who chose to go 'Gay for a Day' with photographs of kisses between people of the same sex. A world not only far removed but quite unimaginable in 1996. Yet, this is not a simple genealogical story of progression. Technology may have enabled a free and easy articulation of desires and identities today but these advertisements in Naya Pravartak are an ode to the resistances created against hegemonic norms.

The very act of posting an advertisement must have posed a huge risk, the risk of being found out, the risk of ostracization, the risk of losing one’s job or estrangement from one’s family. Yet, so many of these inserts give actual names and post bag numbers. The ones which don’t are accorded code numbers and responses to them must mention those numbers on sealed envelopes. Fascinating stories, these. Not sentimental, tragic sagas, but pulsating, throbbing desires . . . “Ordinary looking gay man (36) craves for rugged, muscular men for close intimacy”.

India tried to display its raw power with a series of nuclear tests in Pokhran in the year 1998. As raw masculinist patriotism swept the state, here were people charting out their transgressive maps of desire . . . saree clad men seeking sex with men, men who aspired to be homemakers like their mothers (sample this impish note: “I’m a journalist, also aspiring to be a homemaker like my mother – without getting into a saree. At 27, I look quite okay. You could be slightly older and okay looking as well. Commitment, yes but slowly and surely. If you’re willing to help with the dishes, write to…”); women seeking other women (“24 year old Tibetan lesbian looking for friendship with all lesbians. Working for an export company. Hobbies include photography, writing poems and light music. But most of all I value and enjoy the intimacy of creative, caring friends . . .”) and so on. 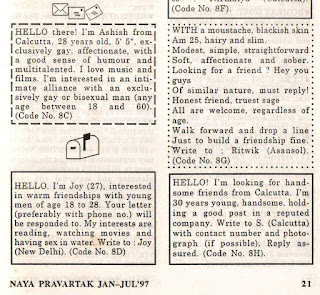 An aside here, why would the woman specify her nationality or region of origin? One can’t help but think of the innumerable racist attacks on people from the North-East in ‘mainland India’ and how they are lumped with the Chinese and the Tibetans. So was the woman trying to tell her audience to contact her only after knowing who exactly she was? Another man mentions that he is Australian. However, Tibet and Australia are not on the same plane! So what could be a case of ‘be with me in spite of who I am’ could turn into ‘be with me because of who I am’. One can ask ironically, can one expect a marginalized set of people to be free of all biases that the mainstream is guilty of? Why can’t a homosexual be casteist or a Dalit homophobic? Do they have extra chips on their shoulders by virtue of being the ‘other’? However, these are only loud thoughts of the author. Please react in the comments section!

Reading along the grain, it is also possible to tease out other details from the advertisements. For instance, in a pre-Internet era, did the homosexual behavior / tendencies of the people who posted these inserts solidify into homosexual identities? As many of the inserts point out, they often identified themselves as ‘gay’ and ‘lesbian’. How did this come about when the mainstream still left such sexualities mostly untouched (this was still before the release of the film Fire, a watershed event in the history of the queer movement in India)?

There’s one intriguing advert: “. . . exclusively gay . . . interested in an intimate alliance with an exclusively gay or bisexual man . . .” What would this mean? Is it a hint at those who indulged in homosexual acts but refused any identity nomenclatures or were simply scared to or thought it better to go back to one’s hetero-patriarchal duties? Now these assumptions can be complicated by the question of the availability of information. If there isn’t any information about an identity, how does one think of assuming one? How does one think through such questions today when identity labels are proliferating each day?

Finally, as we await the results of the curative petition filed in the Supreme Court against its controversial Section 377 verdict, these inserts only go to show that there was always a world beyond the legalese, a world which needs to be celebrated, discussed, debated. The challenge then, for queer activism, is not just the political mobilization of a section of people but also the appreciation of the transgressive potential of the desires that create the people, where pleasure and politics intimately overlap with each other!

Senior Editor with Kindle Magazine, Sayan Bhattacharya loves labels like queer feminist, film buff and humour junkie, but isn’t sure of using them. He can be reached at sayan@kindlemag.in.
Posted by Varta at 12:15