Insight, Happenings, Oct '14
Pawan Dhall and Madhuja Nandi report on a symposium organized in Kolkata on engaging men and boys in gender justice

Kolkata, September 19-20, 2014: “Our education system can no longer afford to be gender blind”; “Let us change the symbolism of god as male”; “Why should giving pain to one’s body be manly or glorious?” Snapshots of some thought provoking comments made by speakers at a two-day symposium titled ‘Men and Boys for Gender Justice’ organized at Seva Kendra by NGOs Swayam, Kolkata Rista, Ebong Alap, Sanjog and FEM Jharkhand. The symposium was a prelude to the ‘2nd MenEngage Global Symposium 2014’ to be organized in New Delhi in November 2014 by the Centre for Health and Social Justice and MenEngage, a global alliance of organizations working with men and boys for gender equality.

The Kolkata symposium sought to create a forum for different civil society practitioners to present their work strategies and share the challenges faced in working with men and boys on gender justice. It also aimed to create a platform for the youth, particularly young men, to voice the concerns that affected their daily lives and to involve them in gender justice initiatives. Significantly, the symposium was organized by an entire spectrum of NGOs, highlighting the fact that gender was not just a women’s issue.

While Swayam is a women’s organization that works to end violence against women and girls, FEM Jharkhand is a network of individuals and organizations that focus on involving men and boys in gender justice. Kolkata Rista is a community-based organization of gender variant males and trans women. Sanjog is a technical resource organization that partners civil society organizations in South Asia that work for the empowerment of children and adolescents. Ebong Alap on the other hand is a group of individuals from different walks of life and with different gender identities and sexual orientations – it talks about gender and sexuality with young people.

Panel sessions, workshops, film shows, theatre, dance and audience interfaces marked the two-day event, which was attended by 150-200 people from Bihar, Jharkhand, Odisha, West Bengal and other parts of India. On the first day, in a panel discussion moderated by advocate Kaushik Gupta, Ruchira Goswami, faculty with the West Bengal National University of Juridical Sciences, Kolkata argued that India’s education system and syllabus needed to be sensitive to gender diversity and acknowledge that there was space between and beyond the gender binary of masculine and feminine. The very concepts of masculinity and femininity were not homogenous either, and this aspect had to be infused into and highlighted through our syllabi for various subjects.

Ruchira Goswami also questioned the stereotypes that creep into our efforts to promote gender equality. If girls can be taught karate, why can’t boys be engaged in activities that bring out their sensitivity? Why the premium on aggression? The next speaker, Philip Peacock, Associate Professor with Bishop's College, Kolkata and engaged with the Church on gender issues, added another dimension to the debate. He said patriarchy as a structure was harmful for not just women but men too – it twisted them into becoming demonic, and there was urgent need to re-imagine all hierarchies and patriarchal notions in religion.

Dr. Payoshni Mitra, researcher, activist and engaged with the Ministry of Youth Affairs & Sports, Government of India on promoting gender equality in sports, questioned the emphasis in competitive sports on “winning at all costs”. Sexist jokes, homophobia, transphobia, myths about intersexuality, dangerous sporting tackles in the garb of rules – all these should be questioned. There was also a need to look at which sports were offered to girls in educational institutions, if any at all. Were there stereotypes here too – football for boys and softball for girls? Why couldn’t boys and girls play and compete together?

To a query from the audience on how to tackle the argument that men were stronger physically than women and so they could not compete together in sports, Dr. Payoshni Mitra questioned: “Why do we forget that men and women have more similarities than differences? Why talk only about testosterone and estrogen? Why not talk about more training and physical fitness for women to reduce the gender gap?” 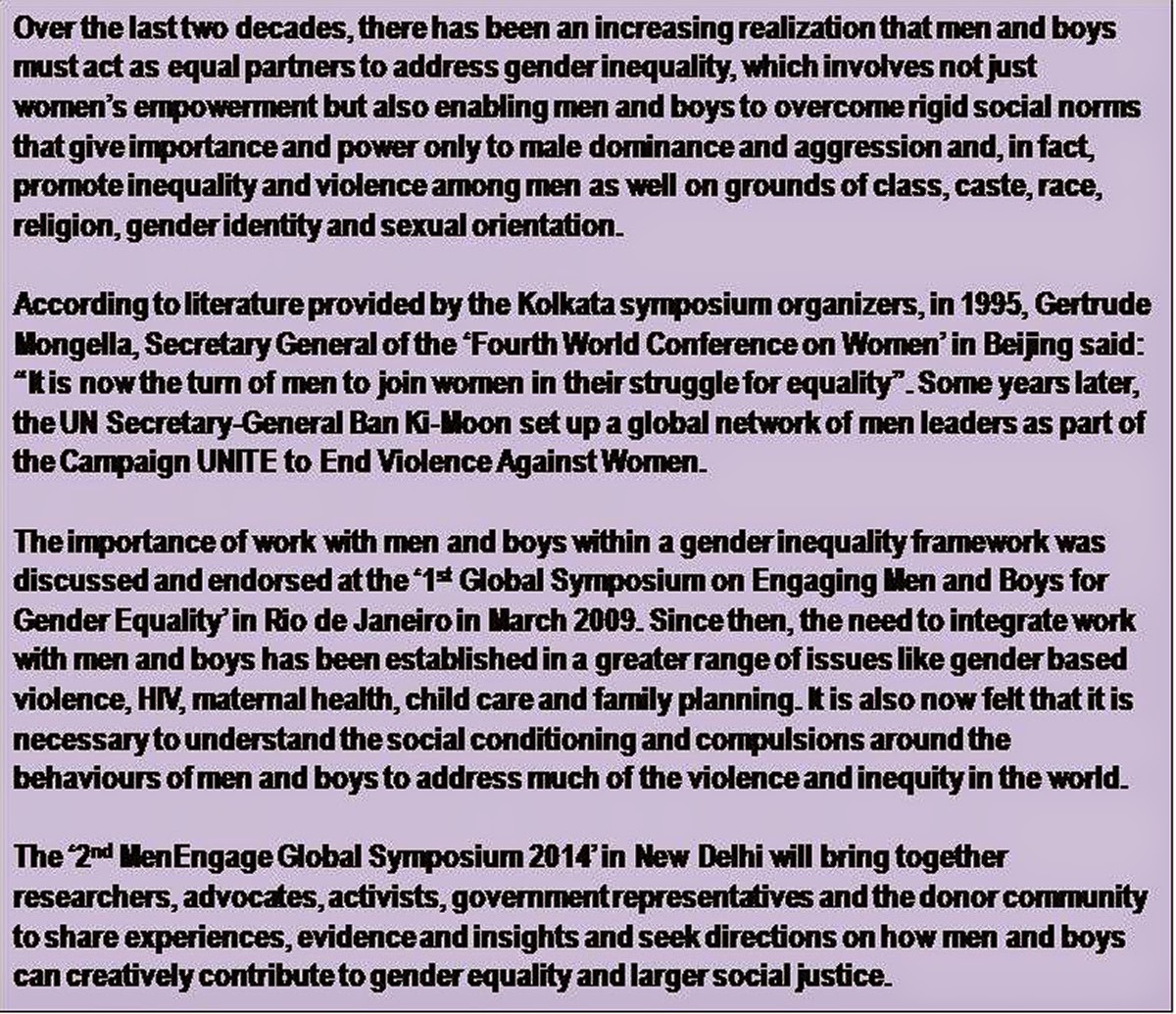 In another panel discussion, Anand Pawar of Samyak, Pune said that symbolism in engaging men and boys in gender justice was not enough. Individual transformation was needed in the men and boys involved in gender justice. That in its turn should lead to institutional transformation. Based on his experience of working with political parties and municipal bodies, he said: “Men learn political correctness quickly, but don’t bring about change in personal lives.” Pointing at the need to push boundaries, he said that in any given community, there was need to work with the men who formed the dominant group and defined manhood for other men to emulate.

Rahul Mehta of FEM Jharkhand pointed out that violence often depended on perception of facts. For instance, if something bad happened to a man’s sister, he would be pained. But if he did the same to his wife, that could be seen as the “done thing” for a man. Satish Singh of the Centre for Health and Social Justice, New Delhi, in response to an audience query on patriarchy in organizations, including NGOs that work with women or lesbian, gay, bisexual and transgender people, said that all organizations were patriarchal in their functioning to some extent. But a feminist approach could help in checking this.

Dr. Santosh Kumar Giri spoke about the challenges faced by Kolkata Rista in advocating on the issues of gender variant males and trans women with the general public, and stressed that the gender justice struggle could no longer ignore the stigma, discrimination and violence faced by people with non-conforming gender identities and sexual orientations.

The first day of the symposium winded up with the screening of When Four Friends Meet, a documentary film made by Rahul Roy as part of a South Asian project on exploring masculinities. The film was part of a package of four films made in India, Pakistan, Bangladesh and Nepal that were extensively used by NGOs working on gender issues to generate a discussion on masculinities. The screening was followed by a lively discussion moderated by Sayan Bhattacharya, a journalist associated with Kindle Magazine. But a few more youth voices from the audience would have made a better impact.

The first half of the second day was dedicated to workshops and strategy building sessions. The workshops focussed on subjects like the development of masculinities and cultural stereotypes; interplay of sexuality, identity and violence; and understanding gender inequality and women’s realities through interactive games. The last working session of the day focussed on developing state wise strategies and networks for engaging men and boys in gender justice. The session was moderated by Kavita Panjabi, faculty with the comparative literature department of Jadavpur University.

The penultimate item on the symposium’s agenda was the presentation of the Nitesh Youth Award instituted by Kolkata Rista. The award was presented to Kadapara Phool Bagan Tarun Sangha, a youth club operating in Kadapara area of Central Kolkata, once infamous for being extremely unsafe for trans women but now significantly transformed, thanks to the efforts of agencies like Kolkata Rista and youth groups. A dance presentation by Kolkata Rista members provided a colourful ending to the symposium.

As serious as the issue was, the symposium had its fair share of humour. As part of his speech on the first day, Anand Pawar presented a list of tongue-in-cheek “indicators of a changed man”. So next time you want to check if a man has had internal transformation, find out the answers to these questions: “Is he homophobic? What does he think about Pakistan? What does he think about military and militarization? Does he believe deodorants actually attract women? How diverse is his friend circle?” Simplistic perhaps, but these indicators could well engage men and boys in much needed dialogue and introspection on gender justice!