As I stood looking up at (and to) Goddess Durga in a popular South Kolkata Durga Puja pandal, the theme of a research paper I was writing on social and economic inclusion flashed past my mind. With her 10 arms resplendent with celestial weaponry, she looked extremely capable of protecting human kind from all directions and from all evils and miseries. Were the Government of India to start a large scale social and economic inclusion programme for the sexually stigmatized and criminalized communities, wouldn’t she make for an apt icon for the programme? Her 10 arms could also stand for a "Come one, come all" slogan!


My flow of thoughts was interrupted by a push from someone in the crowd, and it was time to come back to earth and get out of the pandal. As my colleagues and I gushed out of the exit amid a dense stream of humanity, the ‘struggle to survive’ and come out in one piece made me think that as the manifestation of Shakti, said to be the ultimate power inherent in all creation, preservation and destruction in the universe, surely a part of Durga must reside in each one of us. Isn’t this what gives us the strength to push against all kinds of odds, in a festive crowd or in our daily struggles?

In this issue of Varta, the story Nagin Hijra, My Inspiration may strike you as an example of strength and push for space – respectful space in society. This story also raises the question if it is time for us to give greater recognition to non-normative families. Now that the government (and society) is seized of the matter of acknowledging transgender identities and rights, shouldn’t we also look at Hijra families or households that go beyond birth, descent or marriage and are based on kinship around other forms of social connections? If home is where the heart is, why can’t we ask people where their heart resides and respect those choices?

In the month gone by, I attended two events in Kolkata, a symposium on gender justice and a panel discussion on mental health issues, both rather mundane happenings compared to the scale of Durga Puja or the intensity of Nagin Hijra’s life. But both also focussed on pushing boundaries.

The symposium titled ‘Men and Boys for Gender Justice’, as is obvious from the name, strategized on how men and boys can be engaged in the efforts to ensure gender equality . . . or should it be equity? The two words are often used interchangeably but some people argue that the first only means that everyone gets the same things in order to enjoy wholesome lives, while the second is more desirable as it means that everyone gets what they actually need.

Word play apart, involving men and boys in gender justice is not a new idea, but still immensely relevant and in need of sustained efforts to ensure that half the humanity does not cop out of its responsibilities just because “men will be men”, “boys will be boys” and some women misuse laws meant to protect women. Then again, old ideas can have new dimensions. The organizers of the symposium, apart from women’s groups, also included a support forum for trans women (male-to-female transgender people), highlighting that the issue of gender equality goes beyond the gender binary of men and women. 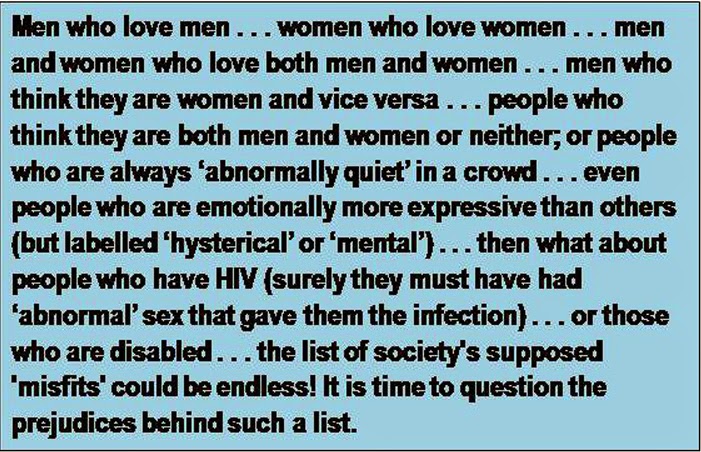 The panel discussion, organized by the West Bengal State Branches of the Indian Psychiatric Society and Indian Association of Private Psychiatry on September 21, 2014 at the Lalit Great Eastern Hotel, was part of their annual conference. The panellists included several activists (including this writer) from the fields of mental health, gender and sexuality, and the purpose was to help mental health professionals become aware of the experience of activists in dealing with stigma around anything or anyone not considered so called ‘normal’.

This reminds me of a telling comment made by co-panellist Ratnaboli Ray of Anjali: “We need to challenge the concept of normalcy!” In that single comment was a lot of food for thought for all the mental health professionals present in the seminar room – for them to reflect on their own biases around mental health and other associated issues. Another instance of pushing boundaries; and a pointer that it is each one of us who need to do the pushing. Let us not always look for Durga in the government, which probably has more arms than all gods and goddesses put together. Let us invoke the Durga in us to push away the frontiers of exclusion and take more and more people along with us.