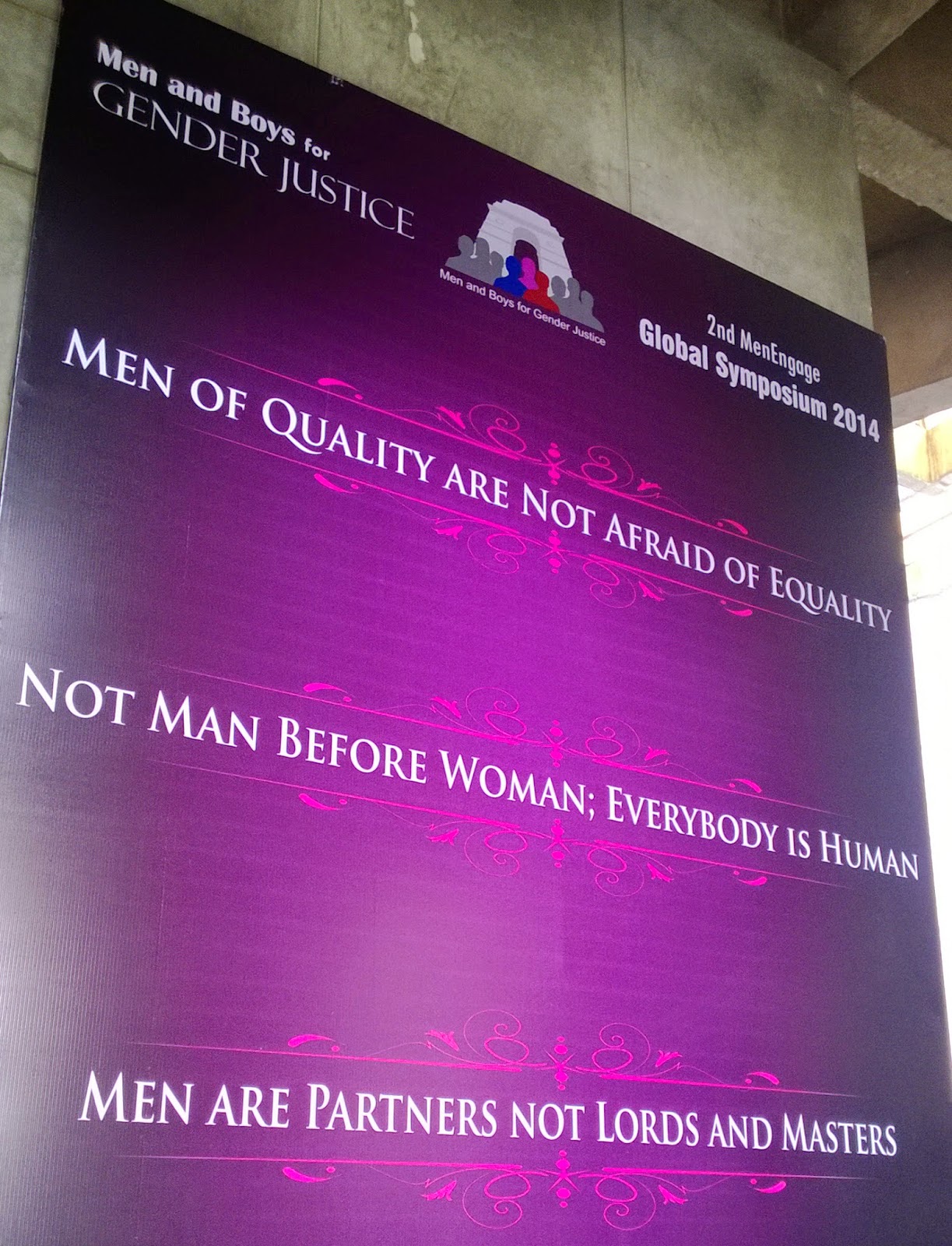 Only men with 56 inch chests welcome! When this becomes the criteria for the top job in the political leadership of a country, where is the space for the sentiment behind a statement like “When women gain, men don’t lose”? Are men pre-occupied with large chest sizes and other aggressive forms of manhood likely to let go off power, share it and invest in women and children’s gains? Are they likely to do so for supposed ‘social misfits’ like transgender, gay, lesbian or bisexual people; or people not from their religion, race, class or caste? Maybe they will, provided they are honoured with larger-than-life and hero-like adjectives such as ‘protectors’ and ‘providers’. But protectors and providers also tend to be ‘controllers’ of freedoms and choices!
So back to square one?


Just one sample of a flurry of ideas shared at the ‘2nd MenEngage Global Symposium 2014’ in New Delhi, November 10-13, 2014. Titled ‘Men and Boys for Gender Justice’, the symposium at India Habitat Centre attracted around 1,200 delegates from 94 countries across the world. It was organized by MenEngage, a global alliance of organizations working with men and boys for gender equity, and Centre for Health and Social Justice, New Delhi, and supported by a large number of donor and other civil society agencies from India and across the world. The first symposium was organized in Rio De Janeiro in 2009, and since then the involvement of men and boys in gender justice seems to have covered a significant distance. 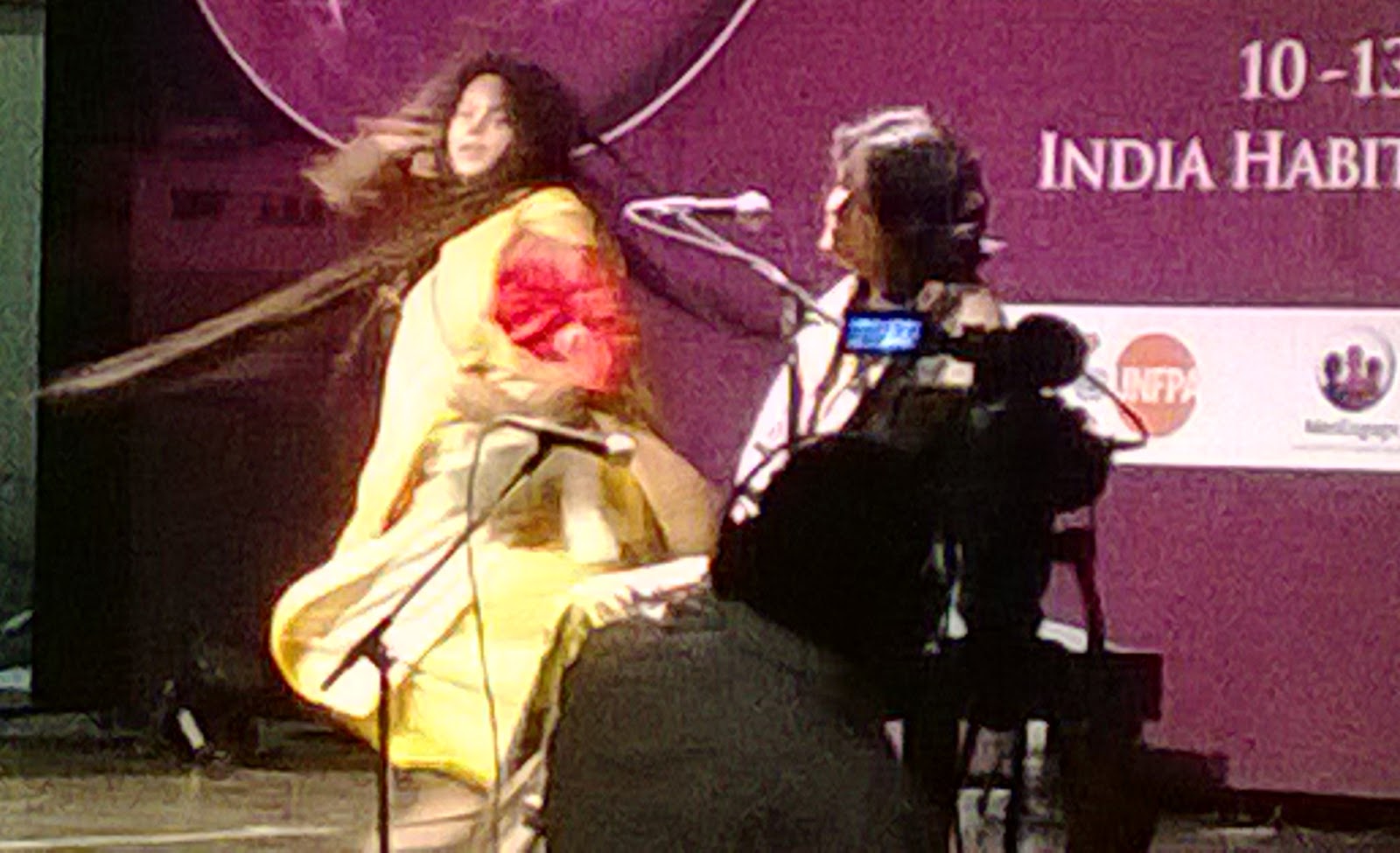 Preceded by over 15 regional preparatory meetings in South Asia since July this year, including Kolkata in India, the symposium’s theme of ‘men and boys for gender justice’ was based on growing realization among individuals and agencies fighting gender injustice that men and boys were not just implicated in violence against women and girls. Many among them were also victims of violence that stemmed from narrow and regressive ideas of what constituted masculinity. As a result, even if there were no world wars being fought, death by physical violence was still one of the leading causes of male mortality in many parts of the world. 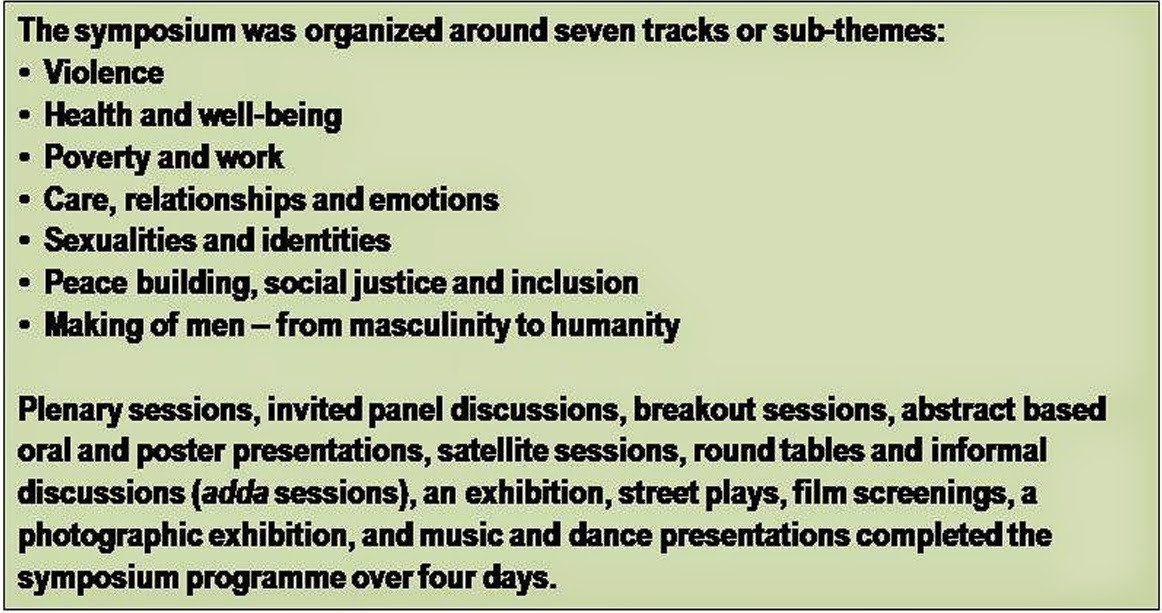 Large conferences have the drawback of tending to overwhelm participants and observers with an overdose of information and ideas. No account of such events can ever be complete, but some speeches and presentations do stand out in terms of content and delivery. One such presentation was made by Michael Kimmel, Professor of Sociology, State University of New York, USA during a plenary session. Excerpts: “Recognition of gender as a social organizing principle is surprisingly recent . . . even now for many men, privilege around their gender is something ‘invisible’ – in fact, privilege of any kind is invisible to those who have it, whether it is related to class, race, gender or other social aspects”. 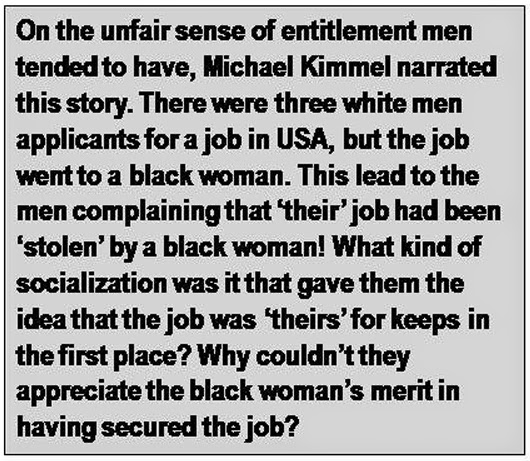 Making men realize the privileges they enjoyed ‘as men’ was the first step in confronting them about their sense of entitlement, and how unfair this sense was. Michael Kimmel added that men often took up the cause of gender equity only when they realized it was beneficial to them also and not just women and children. Of course, it was important to “enlarge the social pie for everyone” and address social and economic security all round. But the key was for men to realize that “gender equity is not a zero sum game and so if women gain, men don’t lose!”

As emphasized by several speakers at the conference, the most important step in ensuring that women and children gained equity was to ask them what they wanted. So, even men eager to be ‘protectors’ and ‘providers’ needed to respect the choices of those they sought to protect or provide for. An example of an intervention that aimed to engage men in promoting gender equity and choice was the ‘Baap Wali Baat – Beti Ki Shaadi 18 Ke Baad’ media campaign of UNICEF India. The campaign was about rewarding the ‘supreme decision-makers’ in the family, the fathers, who went against social norms and ensured that their daughters did not get married before 18 years of age. The relevance of such campaigns stood out in light of data presented by Breakthrough, a global human rights organization: One-third of early marriages globally happened in India. In Jharkhand and Bihar, 50-60% of the girls still got married before 18 years. But the government remained in denial.

Thankfully, the results of the UNICEF India campaign showed that not all men were in denial of self-reflection and many were willing to change. As Niladri Chatterjee, Head of the Department of English, University of Kalyani in West Bengal quipped in another session, “‘Men bad, women sad’ was a simplistic view of gender issues.” Men and boys were not monolithic groups; many among them also were marginalized. Similarly, women and girls must not be equated with helplessness and weakness, in need of being ‘rescued’. Then again, if men and women were to be water-tight groups, where would the transgendered go?

This argument also underlined that gender was a ‘spectrum of possibilities’ rather than a binary of men and women. The presence of a number of trans women and other queer persons among the presenters and other participants seemed to validate this point, though participation of queer forums from within India seemed rather low key. For that matter the symposium seemed curiously bereft of the presence of boys, whether school and college students or out-of-school youth. Even if not as presenters, a greater numerical presence outside the formal sessions would have offered interesting possibilities of engagement and dialogue with them.

There was no dearth of innovative gender justice interventions in India’s neighbourhood. While Shahbaz Akbar Chaudhury from Pakistan talked about films that highlighted the “softer side of men”, Samitha Sugathimala from Foundation for Innovative Social Development, Sri Lanka presented the ‘Happy Family Campaign’, which generated dialogue among youth about the politics of words related to gender issues. What was the essence of a term like ‘bread-winner’? Wasn’t a bread-winner someone who believed in sharing rather than lording it over? Can ‘protector’ be someone who just lazes about while everyone else in the family works? Can he be called a ‘protector’ just because he is a man?

Among Indian innovations, the Centre for Health and Social Justice presented ‘Snakes and Ladders’, a game that encourages participants to reflect on their own positions related to gender issues. Breakthrough talked about the ‘Selfies4School Campaign’, which managed to get 58,000 girls into school in Bihar and Jharkhand in partnership with Vodafone India. Globally speaking, the UN Women’s ‘HeForShe Campaign’ is a social media venture that aims to engage men worldwide in the cause of eliminating violence against women. Its Facebook page describes the campaign as “a solidarity movement for gender equality bringing together one half of humanity in support of the other half of humanity, for the benefit of all”.


On the flip side of affairs, serious challenges to gender justice efforts persist and may even be growing stronger. Several speakers across different sessions at the symposium sounded an alert that a backlash to the gender justice movement was already in the making in India. For instance, Kerala, a state considered the leader in most human development indicators in India, saw disturbing developments in recent times that evoked the ‘politics of immorality’, which should really be seen as nothing but a veiled attack on gender equity. Similarly, larger political and religious developments in the country (not limited to any one political party or religion), manifested through communal riots, controversies like Love Jihad, and incidents of violence against trans women and people from North-East India in Delhi and elsewhere, all had implications for gender justice and had a few things in common – disrespect for plurality, taking away choice from people and male aggression. 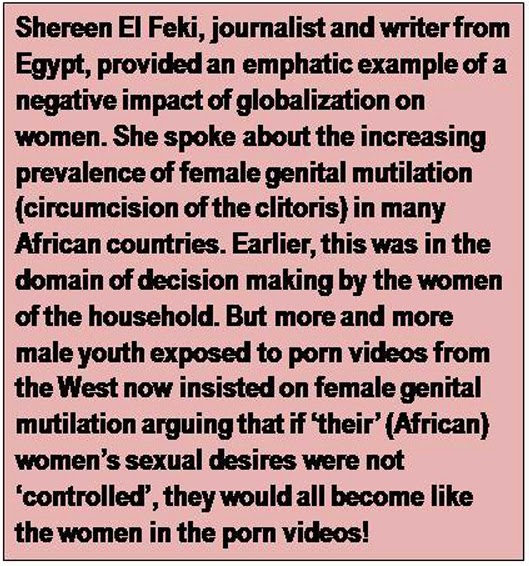 In neighbouring Bangladesh, there was some reason for hope but again not unqualified. Dina Siddiqi from BRAC University said that some attitudinal change among men was visible. Recent studies showed that more and more men were willing to do domestic chores and were not against abortion. Many women had benefitted from the country’s large network of self-help groups and micro-finance initiatives, and the global market forces had helped women garment factory workers gain greater economic freedom. And yet, the garment workers faced considerable sexual harassment on the streets, rapes were being reported in increasing numbers, and quite bewilderingly mobile phone videos of the incidents of rape seemed to be easily available for purchase! The people involved in this “economy of violence” were not necessarily religious bigots; they seemed to be ordinary youth and even the police. Implicit in this scenario was the mixed impact of globalization – empowering in some ways, exploitative in others with regard to women and other marginalized sections of society. 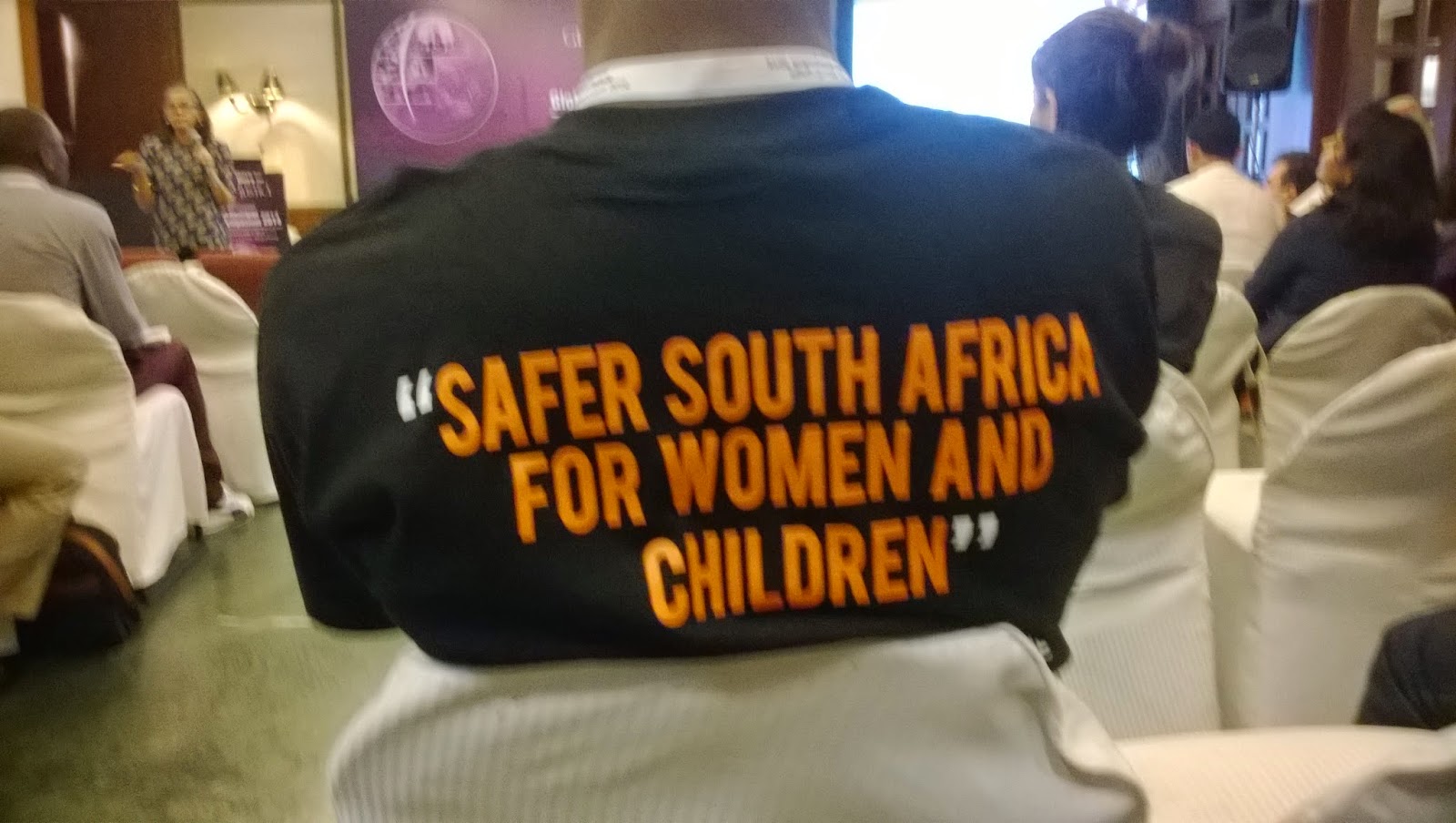 “With so many issues being talked about around gender justice and masculinity, it is very confusing. Which way should I go – as a man?” This question from a member of the audience may resonate with many readers of this article. There would be no pat answers, but as Akshay Khanna of the Institute of Development Studies, UK responded to the query: “Experiment a bit, imagine new ways of being a man, woman or any other gender!” In effect, give up negative masculinities, adopt more caring ones . . . but then again, how? Some random tips heard at the symposium: 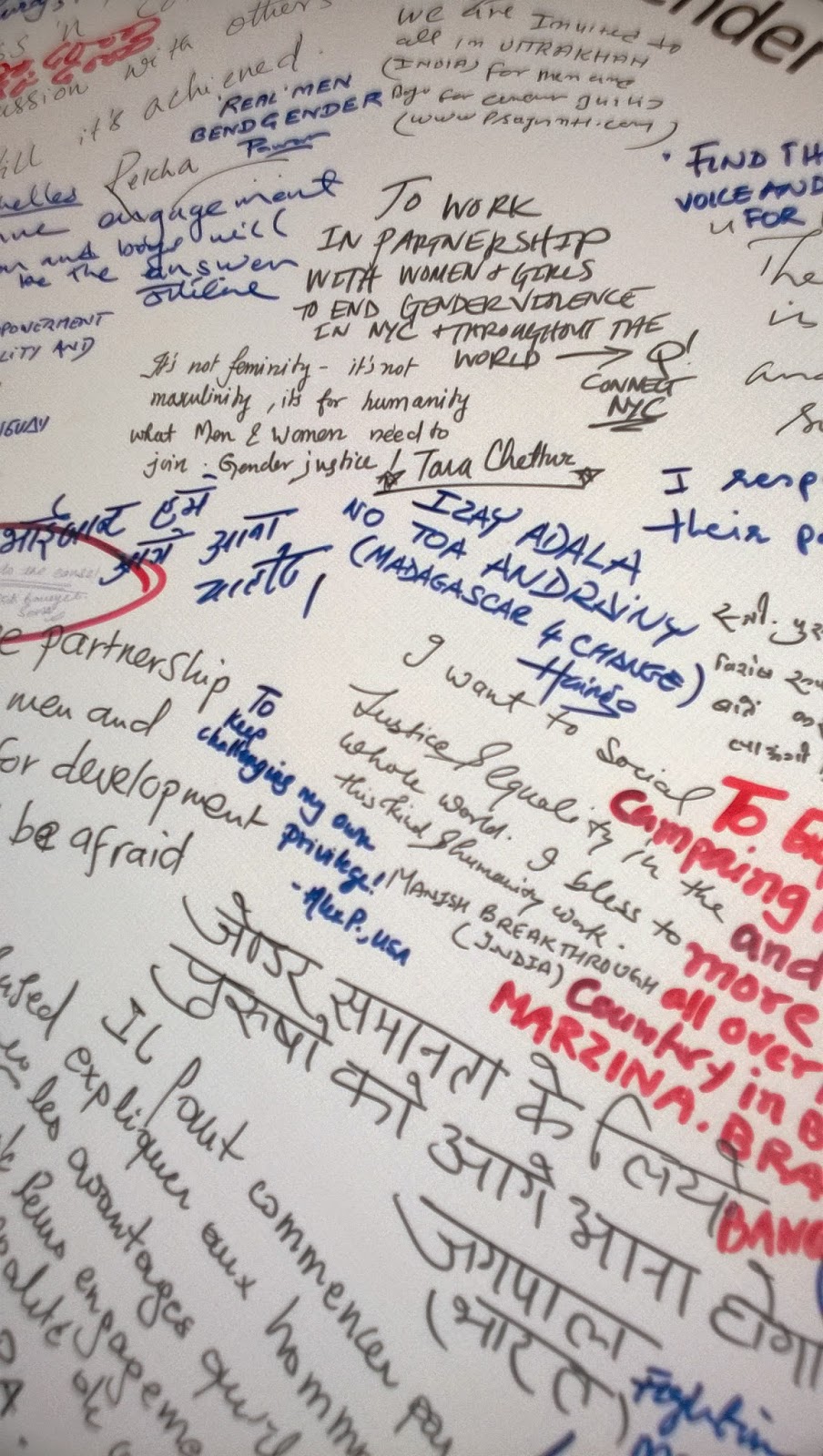 “The battle of gender justice is with social systems, not people – it is about power and powerlessness – it is about sharing power.”

“Gender equity means men have to engage ‘in the right way’, and not just superficially where they actually don’t let go off the reins of power” – Actor Rahul Bose at the curtain raiser

“Promote choice for women, men, everyone in the widest possible sense. For instance, is it enough to only delay marriage for girls? How about letting them choose their partners (marital, live-in, sexual or any other), irrespective of the gender? How about giving them the option to say no to marriage?”

“Stop normalizing violence – whether physical, verbal or in any other form!”

“Attitudinal changes among men and boys are seen most where the mothers have had education and where the parents are seen to set an example” – Gary Barker, Co-Chair, MenEngage Alliance, USA

“Social workers who take up the cause of gender justice should disabuse themselves of gender inequity and patriarchy in what they say and do!”

Meanwhile, for those inclined towards an in-depth reading of ‘which way home’ in the struggle for gender justice, the Delhi Declaration and Call to Action issued at the closure of the symposium may be of interest.