Where to look for minuscule minorities

From the Archives, Nov '14
A random flipping through Counsel Club’s archives takes Pawan Dhall to the world of a few queer men writing in to the support group from small-town India in 1998 – a world where loneliness, anxiety, aspirations and courage all took on the hue of a yellow light bulb, quite removed from the arc lights and neon of metropolitan cities. These series of articles intend to create an archive of the queer movement in Bengal and India – not a chronological narrative of the movement, rather anecdotal histories capturing the little voices that are often lost in general historical accounts – voices from thousands of letters received by Counsel Club, one of India’s earliest queer support groups (1993-2002), and from the group’s house journal Naya Pravartak.

“I can’t figure out why, but life seems so miserable today. Is this frustration? Tomorrow, Saturday, our weekly newspaper will be published and yet I didn’t go to work today. Instead I went to see the evening show of Satya. I quite liked it, but do you know how far the cinema hall is from home . . . six km! And there are no buses after 8.30 pm. I decided to walk back home, but somebody gave me a lift on his scooter . . . I wanted to talk to you all on the phone today, but wasn’t sure if I would get anyone . . . You know, these days I see people on the road and think they may well be one of us, but I never get down to talking to any of them. You guys have formed such a nice ‘group’ there, people get to meet each other, talk to each other . . . but I am all alone here. Please help me, for I am gradually losing heart . . .”

This was Mohan’s letter from Rupnarayanpur (Hindustan CablesTown), near the western border of West Bengal with Jharkhand, written in December 1998 to a Counsel Club member (excerpts translated from Bengali, with some English words retained in inverted commas). 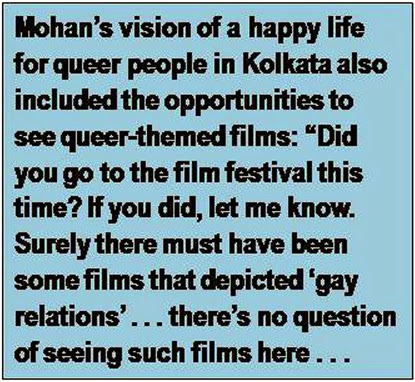 Mohan’s vision of a happy life for queer people in Kolkata also included the opportunities to see queer-themed films: “Did you go to the film festival this time? If you did, let me know. Surely there must have been some films that depicted ‘gay relations’ . . . there’s no question of seeing such films here . . . Did you see Fire? There seems to be a lot of trouble in Bombay, Delhi.” Mohan’s letter seemed to enhance the emotional remoteness of Rupnarayanpur, though it was just about 230 kilometres from Kolkata by road.

Reading Mohan’s letter nearly 16 years later, I compared the ‘fire’ lit by Fire with the heartburn given by the Supreme Court almost a year ago when it reinstated Section 377, Indian Penal Code. That ‘fire’ seemed to galvanize; this one, though fought back by activist and legal vigour, demoralized and continues to smoulder.

As we approach the first anniversary of the Supreme Court verdict, here’s a vignette about a signature campaign against Section 377 that started in 1997 and continued through to 1998. Asit from Silchar, Assam wrote: “. . . thank you for sending me the signature campaign papers but I’m very sorry for collecting only three signs. DD and RR are my two best friends. And none of them are gays. In fact, DD is going to get married next year and RR has also a steady girl friend. When I asked for sign DD just read the papers and signed up immediately. She believes in individual liberty. She’s a very intelligent girl . . . She’s one of the best quizzards in Assam . . . RR is a doctor and he is also the eldest son of an eminent lawyer. His father is now an MLA . . .”

Mohan and Asit, two of the ‘minuscule minority’ members the Supreme Court may not have counted in dismissing the negative impact of Section 377 on queer lives – but at least now we know where to look for them! Meanwhile, 19 years old Ruchir from Jatni, not far from Bhubaneswar in Odisha, was all eager to try out a career in advertising: “I am very interested in ADVERTISING. Right now I have enroll for a diploma course (of one year) in Advertising Management . . . I need some tips from you. Do suggest me what should I do / don’ts to make myself more fit for this ad-industry. Do you suggest me any other course/s? I want my verbal (English) communication + written – what should I do?” 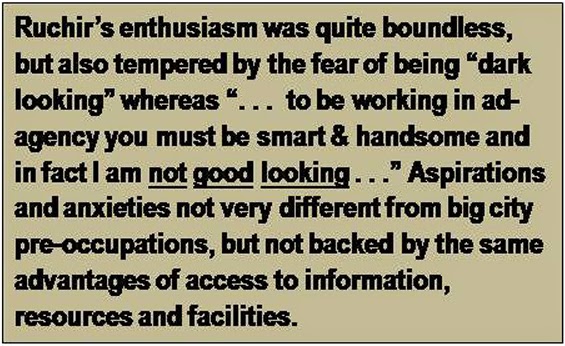 Ruchir’s enthusiasm was quite boundless, but also tempered by the fear of being “dark looking” whereas “to be working in ad-agency you must be smart & handsome and in fact I am not good looking." Aspirations and anxieties not very different from big city pre-occupations, but not backed by the same advantages of access to information, resources and facilities. Quite likely Ruchir would have had to put in twice the efforts of his metropolitan counterparts to reach far in his pursuits.

On the other hand, there was also the question of marriage – the ‘great equalizer’ for queer people (for everyone?) quite irrespective of their geographical location, class, race, religion or other parameters. Raman from Ranchi, 34, artist and fabrics designer, wrote in his very first letter to Counsel Club in September 1998: “I am from a conservative family, meaning, only conservative in thinking about sexuality. This issue generally is not discussed openly as is the case with general Indian homes. From a very young age I realized I was sexually more attracted to boys or men. As I grew up I had the normal work pressures which come after one finishes schooling and college. The problem now is, I know I certainly don’t want to marry a woman as I probably won’t be able to consummate my marriage. There is mounting pressure on me for marriage . . . I am facing a dilemma which is very nerve-wracking . . .”

An oft-repeated situation for queer men anywhere in India, but for Raman his location in a small town did amplify the challenge. Not only was he resisting marriage, but also trying to come out of a sexless life: “Being from the place I am, I have not yet found any sexual partner.” Even in 1998, Ranchi, the capital of Jharkhand state, would not have been a desert for men looking for male sexual partners, but possibly that would most often have required venturing out into cruising spots, something not feasible or palatable for everyone. The town, now bursting at its seams, did not have, and probably still does not have, the socializing opportunities offered by support groups or networks (common in bigger cities) in a relatively safer or less threatening environment. 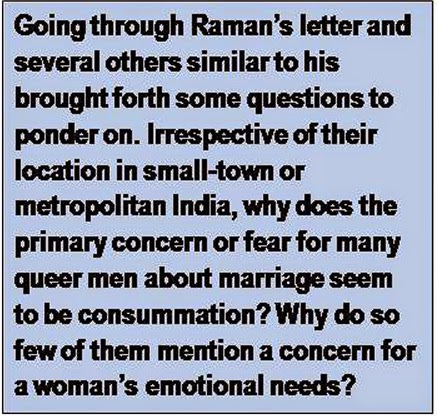 Raman had also a challenge to his mobility to deal with: “I have a handicap in form of Polio in my left arm and right leg, but I can walk (I don’t use a wheel chair) . . .” And he had certainly not given up on life: “Otherwise I have been fortunate enough for being financially independent and thank God for that! I get very depressed at times thinking whether or not I’ll ever be able to enjoy a normal sex life with a person of my choice. Please help me with my problem. If there is any hope for me I shall certainly persevere . . .”

This article could very well end here – on a note of optimism trying to emerge out of distress. But going through Raman’s letter and several others similar to his brought forth some questions to ponder on. Irrespective of their location in small-town or metropolitan India, why does the primary concern or fear for many queer men about marriage seem to be consummation? Why do so few of them mention a concern for a woman’s emotional needs? Why do so many of them feel relieved (or redeemed) if they are indeed able to consummate their marriage?

Isn’t this a reflection of social priorities (and pressures) where a married woman’s emotional fulfillment counts for so little; where it is compulsory but also just enough for her husband (queer or otherwise) to be able to penetrate her sexually so that she begets children, preferably sons? What does this tell us about marriage as an institution?