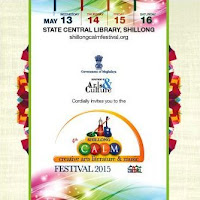 Shillong, May 17, 2015: The ‘4th Shillong Creative Arts Literature & Music Festival’ that concluded at the State Central Library here yesterday broke new ground by including issues of HIV, substance abuse and diversity in gender and sexuality. An entire day on May 15 was devoted to the literary, legal and activist dimensions of the lives of lesbian, gay, bisexual, transgender and other queer people in India.


The festival, popularly known as CALM (short for Creative Arts Literature & Music) Festival, was conceived of by the Government of Meghalaya and Sahaki Society in 2012 as a platform for artistic expressions in North-East India, and to re-establish Shillong as the focal point of the region’s cultural and literary scene. In days of yore, scores of writers, musicians, artists and other creative individuals found inspiration in the pristine pine trees and babbling brooks of Shillong. It is this heritage that is the inspiration for the CALM festival.

Typically, the festival puts equal emphasis on all dimensions of creativity – from literature to the performing and visual arts, as well as thought-provoking interactive sessions on social issues that are threatening to destabilize ‘calm in society’. In this lies the essence of CALM – to create a calm society!

This year, the challenge before the Department of Arts and Culture of the Government of Meghalaya and Sahaki Society was to bring forward a number of issues still taboo in society. Among these were the concerns of lesbian, gay, bisexual, transgender and other queer communities. Shamakami, perhaps the only NGO in Meghalaya that takes up queer community issues, was called in to be one of the coordinators with Sahaki Society for programming on queer issues.

A panel discussion on queer issues, moderated by this author, was the starting point. The speakers were Sandip Roy, Kolkata-based Senior Editor with the popular news portal Firstpost.com and whose debut novel Don’t Let Him Know has received much critical acclaim; Wendell Rodricks, prominent fashion designer from Goa and known to be vocal about his gay identity and the larger issue of gay rights; Laxmi Narayan Tripathi, transgender activist from Mumbai and Bharatnatyam dancer; Professor R. Raj Rao, novelist, poet, queer theorist and associated with the Department of English, University of Pune; and Niharika Banerjea, gender and sexuality researcher and faculty with the University of Southern Indiana, USA.

Sandip Roy, who has been involved in queer activism since the late 1980s and was at one time the Editor of Trikone Magazine, one of the earliest South Asian queer journals in the world, spoke about the impact of Section 377 of the Indian Penal Code on the lives of queer people. Wendell Rodricks spoke about the stand taken by the churches in India in relation to queer people and commented on media coverage of queer issues.

Niharika Banerjea, whose special interest lies in the geographies of sexualities, dwelt on the scenario of queer activism. Professor R. Raj Rao talked about queer issues in India in the literary context, especially queer-themed books and poetry. Laxmi Narayan Tripathi, who has also founded a transgender rights NGO called Astitva, spoke about the Supreme Court of India judgement on transgender identities and rights, and elaborated on what was expected from the judgement towards improving the lives of trans persons in India.

The panel discussion was followed by a launch of Me Hijra, Me Laxmi, Laxmi Narayan Tripathi’s autobiography. Shillong-based psychiatrist Dr. Rica Lamar was the chief guest on the occasion. The book launch was followed by a conversation on the book in which Laxmi Narayan Tripathi was joined by Professor R. Raj Rao, who translated the book into English along with Professor P. G. Joshi. The book is also available in Marathi and Gujarati.

The festival also included the screening of Debalina Majumder’s 2013 documentary film and the Unclaimed. The film was presented by Sumita Bandyopadhyay of Sappho for Equality, Kolkata (the film’s producers) and Niharika Banerjea. The hard-hitting film that revisited the tragic double suicide of two women in love in Nandigram, West Bengal in 2011, emerged out of a fact-finding mission undertaken by Sappho for Equality to look into the events that lead to the double suicide and those that unfolded afterwards, including the heart-wrenching fact that the bodies of the two women remained unclaimed by their families and were cremated unceremoniously by the police.

It was encouraging to see that these events attracted packed and appreciative audiences. One hopes that this inclusion of queer issues in CALM is here to stay and that in the years to come there will be further critical presentations on gender and sexuality diversity.

Rebina Subba is a lawyer, social activist and founding member of Shamakami, the only organization working on LGBTQI issues in Meghalaya. As a member of the Meghalaya State Commission for Women, she strives to bring together trans activism and women’s activism. Through Shamakami, she also provides legal aid to people living with HIV and people with special challenges.