Advice - Disability, Jun '15
In this second article in a new series on disability, Shampa Sengupta questions stigmatizing and fancy labels for persons with disabilities and calls attention instead to their identity and rights


Masudur Rahman Baidya was a double amputee who crossed the English Channel – he died at a very young age in April this year. At a memorial organised by West Bengal’s largest disabled people’s organisation, where Masudur Rahman Baidya served as one of the Vice Presidents, a renowned athlete (who was not disabled) paid homage to this great achiever.

She said that she never considered Masudur Rahman Baidya “a disabled person” because of the triumphs in his life. With due respect to her point of view, somewhere down the line it began to seem that ‘being disabled’ was a curse and the concepts of achievement and disability did not go together.


The speaker’s mindset was clear, she meant to say that Masudur Rahman Baidya was ‘one of us’ and thus, could not be ‘disabled’. But we need to understand that, in effect, she denied the disability identity of her fellow sportsperson, and this reflected larger society’s discomfort towards the world of the disabled. 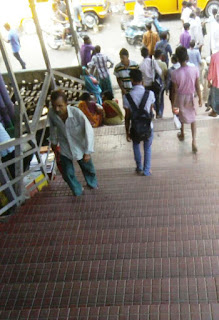 Many new terms have been coined for persons with disabilities – ‘physically challenged’, ‘mentally challenged’ or more flowery ones like ‘differently abled’ or ‘specially abled’. Each of these seems to be an attempt to forget the reality, to shy away from the truth in relation to persons with disabilities. India remains a country of paradoxes – even after ratifying the United Nations Convention on the Rights of Persons with Disabilities, our policy makers did not feel it necessary to change the names of government institutions and we continue with names like National Institute for the Hearing Handicapped or the National Institute for the Visually Handicapped. So much so that in early 2012, the Chief Commissioner of Persons with Disabilities (CCPD) brought out a circular on banning the use of expressions like ‘handicapped’ and ‘differently abled’.

Here’s what the CCPD’s circular said: “This Commissionerate hereby seeks to impress upon you the need for discouraging and banning the use of the expression ‘handicapped’ at least in the context of official correspondence, official reports, government institutions, organizations, etc. It goes without saying that the expression ‘handicapped’ violates and undermines the dignity of persons with disabilities which is so manifestly against the spirit of the Constitution of India, the Persons with Disabilities (Equal Opportunities, Protection of Rights and Full Participation) Act, 1995, and, the United Nations Convention on the Rights of Persons with Disabilities to which India is a State party.”

The circular also said: “That such an expression, as stated above, violates and undermines the dignity of persons with disabilities becomes all the more clear when one considers the origin or etymology of the expression. In medieval Europe, beggars used to beg with a cap in their hands. Over a period of time, this came to be associated with persons with disabilities as they were, for all practical purposes, considered objects of pity and passive recipients of charity not capable of doing anything except begging. How blatantly erroneous such an attitude happens to be requires no elaboration!”

The origin of the term ‘handicapped’ may be debated. But the government continues to use it unmindfully on many occasions. A common example is the ‘handicapped’ seat in our buses! The circular obviously was just another piece of paper nobody took seriously. 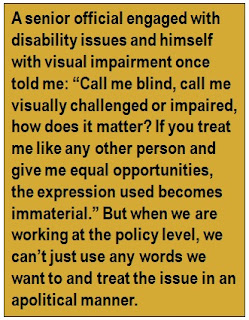 The circular further elaborated: “The use of such other expressions as ‘differently abled’ should also be discouraged as such an expression harps more on the differentiality dimension at a time when we need to promote equality dimension. In addition, no two living entities under the sun are uniformly abled or uniformly disabled in all respects. In that sense, each one of us, regardless of our ability or disability, happens to be unique and different. Therefore, it is erroneous to single out and to describe only persons with disabilities as ‘differently abled’. In view of the above, it would be appropriate to describe such persons as ‘persons with disabilities’, or for that matter, as ‘persons with blindness’, ‘persons with speech and hearing impairment’, ‘persons with locomotor disabilities’, etc. wherever such description is both necessary and relevant”.

However, neither the government nor the NGOs and the media paid heed to the circular. As a result, even today, words like ‘handicapped’ and ‘differently abled’, which shift the politics of disability into charity mode, continue to be in use.

Whenever one talks about disability, the terminology around it seems to take up the major time. At a certain level, one feels terms are not that important – so many times our disabled friends tells us that we can use any term we prefer – but at the policy level it makes a major difference. A senior official engaged with disability issues and himself with visual impairment once told me: “Call me blind, call me visually challenged or impaired, how does it matter? If you treat me like any other person and give me equal opportunities, the expression used becomes immaterial.” But when we are working at the policy level, we can’t just use any words we want to and treat the issue in an apolitical manner.

Masudur Rahman Baidya may have said that he did not like to be reminded of his disability, but did that remove the disabled-unfriendly environment he had to encounter in our country? Let’s not play with words and paint rosy images – because it is a question of identity and along with that recognition of the barriers faced by persons with disabilities and the ways of overcoming them.

Shampa Sengupta is a Kolkata-based activist working on gender and disability issues for more than 25 years. She is the founder of an advocacy group called Sruti Disability Rights Centre and is Executive Committee Member, National Platform for Rights of the Disabled. She will be happy to answer your queries on disability and related issues. Write in your queries to vartablog@gmail.com, and they will be answered with due respect to confidentiality.
Posted by Varta at 20:00